No connection, no climate change, no crap this is trouble! Scientists have discovered the presence of several giant, tropical ticks with striped legs in Germany. They can carry some nasty diseases and researchers worry they are here to stay.

A U.S. decision to subsidize its renewable energy companies and impose tariffs on imported products has seriously distorted the global market and harmed China’s interests, China’s Ministry of Commerce said late on Tuesday.

It’s not even WTF Friday!

On Monday, the University of Los Angeles College of Divinity in Compton announced it had selected former Los Angeles County Sheriff Lee Baca to join its ranks of professors.

Baca is currently out on bail as he pursues an appeal of a conviction for his part in what is colloquially known as Operation Pandora’s Box, a series of orders and actions that attempted to derail a federal investigation into brutality and corruption by deputies in LA County’s jail system.

(Six members of the sheriff’s department were convicted of obstruction of justice—along with Baca, and former undersheriff Paul Tanaka—ostensibly for following orders handed down from Baca and Tanaka.)

In May 2017, Baca was sentenced to three years in federal prison after a jury found him guilty of one count each of conspiracy to obstruct justice, obstruction of justice and making false statements to federal investigators.

Interestingly, in October 2017, the 9th Circuit Court of Appeals approved Baca’s motion for bail pending his appeal based, in part, on the fact that they believed one portion of Baca’s appeal could have merit—the claim that U.S. District Judge Percy Anderson “erred by excluding expert evidence” of Baca’s Alzheimer’s disease.

Baca’s lawyers claimed that the ex-sheriff’s Alzheimer’s diagnosis meant that he did not have the requisite mens rea (criminal intent or knowledge that his conduct was illegal) to be charged with and convicted of making false statements to the feds.

Yet the college, and the now 76-year-old Lee Baca, appear to believe that the former sheriff has the cognitive strength to teach students.

Baca has, in fact, worked as a college professor in the past, at both Cerritos College and the University of Laverne, and has had the reputation as a talented, if oddly wandering, public speaker.

The evangelical Christian college’s Vice President of Academic Affairs, Dr. Michael Miller, praised the ex-sheriff as a “gifted teacher” who “changed the dynamics within a workforce of over 18,000 people” and who has just the right skills to “greatly benefit our students and the community we serve in Compton, Watts, South Central Los Angeles and parts of Long Beach, as a University.”

In its announcement, the college pointed out that with Baca at the helm, the LA County Sheriff’s Department saved the city of Compton—home to the University of LA College of Divinity—more than $8 million when it took over the policing of Compton from the city’s local police department in 2000.

Baca also “believes that fundamentally that there is a greatness to every human being and that God is involved with every person’s life, whether they think so or not, and this belief makes him a perfect teacher and role model for Christian students,” Dr. Miller said.

Regarding Baca’s felony conviction, Miller indicated that he believed the prosecution was “politically based” and pointed out that, in his first trial, Baca “was voted 11-1 not guilty.” In the second trial, Miller said, “several former sheriffs testified against him in order to gain favor for themselves.”

Exempts firms that gave money to Trump enterprises or friends. The bill puts watered-down controls on US government contract with China’s ZTE Corp and Huawei Technologies. Nevertheless, China has expressed concerns about new measures in the defense act. Denmark is set to build a fence along the German border in an attempt to keep out swine flu. Critics say it won’t work, harms wildlife and may only be a symbolic gesture to cater to farmers and anti-immigrant sentiment.

Not disputes – lies for political advantage! A 2004 report describing how Serb forces killed thousands of Bosniaks in Srebrenica in 1995 is “untrue” and “biased” according to the Serb-dominated entity in Bosnia, Milorad Dodik. Local lawmakers voted to revoke it. 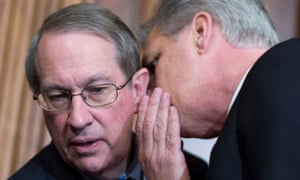 The Republican party is increasingly alienating younger voters, older voters and voters in the suburbs. But there is one constituency turning against GOP lawmakers that they must be especially disappointed about losing: their own family members.

On Monday, Bobby Goodlatte, a Virginia-based designer, announced he had donated the maximum amount to Jennifer Lewis, the Democrat running in Virginia’s sixth congressional district. He also claimed he persuaded five others to do the same. There was nothing untoward about the donations save for the fact that Goodlatte’s father, GOP congressman Bob Goodlatte, has been the representative for the district since 1993. Bobby says he wants to “flip” districts like his father’s in 2018.

Three people who ARE NOT Government Employees are running one of the largest parts of the Government – The Veterans Administration.

We have Pro Publica to thank for informing us of this absolutely outrageous situation.

You know a veteran?

You know a veteran that gets their healthcare from the VA?

Maybe you should let them know that the decisions for their healthcare are being made by three people that they’ve never heard of. Three people whose only qualifications is that they pay dues at Mar-a-Lago.

The Shadow Rulers of the VA

Last February, shortly after Peter O’Rourke became chief of staff for the Department of Veterans Affairs, he received an email from Bruce Moskowitz with his input on a new mental health initiative for the VA. “Received,” O’Rourke replied. “I will begin a project plan and develop a timeline for action.”

O’Rourke treated the email as an order, but Moskowitz is not his boss. In fact, he is not even a government official. Moskowitz is a Palm Beach doctor who helps wealthy people obtain high-service “concierge” medical care.

More to the point, he is one-third of an informal council that is exerting sweeping influence on the VA from Mar-a-Lago, President Donald Trump’s private club in Palm Beach, Florida. The troika is led by Ike Perlmutter, the reclusive chairman of Marvel Entertainment, who is a longtime acquaintance of President Trump’s. The third member is a lawyer named Marc Sherman. None of them has ever served in the U.S. military or government.

Yet from a thousand miles away, they have leaned on VA officials and steered policies affecting millions of Americans. They have remained hidden except to a few VA insiders, who have come to call them “the Mar-a-Lago Crowd.”

Perlmutter, Moskowitz and Sherman declined to be interviewed and fielded questions through a crisis-communications consultant. In a statement, they downplayed their influence, insisting that nobody is obligated to act on their counsel. “At all times, we offered our help and advice on a voluntary basis, seeking nothing at all in return,” they said. “While we were always willing to share our thoughts, we did not make or implement any type of policy, possess any authority over agency decisions, or direct government officials to take any actions… To the extent anyone thought our role was anything other than that, we don’t believe it was the result of anything we said or did.”

VA spokesman Curt Cashour did not answer specific questions but said a “broad range of input from individuals both inside and outside VA has helped us immensely over the last year and a half.” White House spokeswoman Lindsay Walters also did not answer specific questions and said Perlmutter, Sherman and Moskowitz “have no direct influence over the Department of Veterans Affairs.”

But hundreds of documents obtained through the Freedom of Information Act and interviews with former administration officials tell a different story — of a previously unknown triumvirate that hovered over public servants without any transparency, accountability or oversight. The Mar-a-Lago Crowd spoke with VA officials daily, the documents show, reviewing all manner of policy and personnel decisions. They prodded the VA to start new programs, and officials travelled to Mar-a-Lago at taxpayer expense to hear their views. “Everyone has to go down and kiss the ring,” a former administration official said.

Three people, with no experience whatsoever, outside of being able to sign a check for dues at a PRIVATE CLUB, have say over what happens to the largest medical service in the country? The VA directly serves more people than any other healthcare system in the government.

Like with Jared, and Ivanka, once again, we have people who are unaccountable running policy for this country.

How many veterans have been hurt because of their policy decisions?

How many have been killed?

Why aren’t their policy plans being discussed? Being debated?

Why aren’t these men being called before Congress to justify what they’re doing?

Once again, here is ANOTHER point for why you should vote in November.

MILLIONS of Veterans are having their healthcare affected, and NOTHING from Congressional Republicans.

We MUST have accountability.