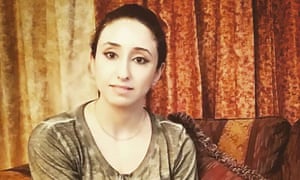 The publisher of a Palestinian author denied a visa to appear at the Edinburgh book festival this year says the Home Office has effectively stopped her from speaking, despite reversing its decision.

Nayrouz Qarmout, who is also a TV journalist, was one of a dozen Middle Eastern and African writers and illustrators who had their applications for visitor visas refused, sometimes multiple times, ahead of this year’s festival, which began on Saturday.

Under Mohammed bin Salman, the country has so far been involved in spats with Canada, Germany and Sweden, and embroiled itself in conflict with Yemen, Qatar and Lebanon. There is no “top-down” Arab spring here. Just a taste of what volatile princes, humoured by a gullible west, are capable of in a world where the old rules no longer apply.

Makes it clear that his next move will be to expel non-Jews from Israel, regardless of their citizenship.

Netanyahu claimed that the Israeli Army is in the midst of a comprehensive military confrontation with the Palestinian factions in the Gaza Strip.

He also said the demonstration by the Arab Monitoring Committee against the Nation-State Law is conclusive proof of the challenges facing Israel.

“I will not reveal the operational plans of the army,” Netanyahu said during Sunday’s session of Likud ministers. “But I can confirm the plans are ready and present for any scenario.”

“With the escalation on the southern front, there is an exchange of blows and it will not end in a single blow,” Netanyahu continued. “Our demand is clear, a complete ceasefire and we will not accept less.”

Encouraging incitement among the Arab masses in the country, Netanyahu talked about the demonstrations to remove the Nation-State Law, saying that the protestors want to turn Israel into a Palestinian State.

“Flags of the Palestine Liberation Organization have been raised in the heart of Tel Aviv and we have heard calls. ‘in blood and fire we need you, Palestine.’ Now it is clearer than ever that the Nation-State Law is necessary to ensure Israel’s future as a Jewish state.”

Netanyahu’s remarks came before the cabinet meeting on security and political affairs, which will be held this afternoon. The meeting is in order to discuss military escalation on the southern front and to discuss the ceasefire proposal for the Palestinian factions in Gaza.

The Israeli Defense Force recommended that the Israeli army continue its military operations and stand ready for any emergency on the southern front, in addition to the continued assault on “cells” that fire kites and balloons at the Gaza envelope.

WTF President Donald Trump backed boycotting American motorcycle manufacturer Harley Davidson Inc on Sunday, the latest salvo in a dispute between the company and Trump over tariffs on steel. 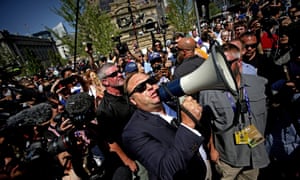 The tech giant is scared of losing power, yet as a media platform it must be responsible for its content

Alex Jones isn’t your typical rock star name – I knew at least three at school. But rock star is what Alex Jones, the founder of the conspiracy enterprise Infowars and far-right rant-merchant, has become. At least to the millions of people who visit his site each month, the 427,000 Twitter followers and to the president of the United States, who has praised him.

Jones’s greatest hits include referring to US school shootings as “false-flag” hoaxes, enabled by “crisis actors” (a family of a Sandy Hook victim is currently suing Jones and has had to move multiple times to escape harassment from his fans); believing Hillary Clinton runs a paedophilia ring from a Washington pizza joint (off the back of which a man with a gun turned up at the restaurant); and that standard antisemitic trope of Jewish people running the world. Oh, and two weeks ago, he held up a Guardian article of mine as an example of more liberal media voodoo. I think Jones might be overestimating my global influence. 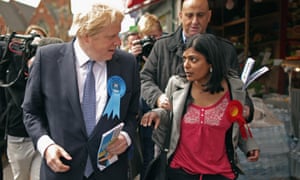 A Tory peer and former aide to David Cameron accused Boris Johnson of “moral emptiness”, casual racism and “courting fascism” as division over the former foreign secretary’s comments about Muslim women threatened to develop into a full-blown crisis for Theresa May and her party.

The comments by Lord Cooper, a former pollster who worked for Cameron at No 10, came after Jacob Rees-Mogg, leader of the party’s anti-EU right wing, criticised the prime minister for backing an investigation into Johnson’s remarks, in which he compared women wearing burqas to “letterboxes” and “bank robbers”. Rees-Mogg said May had countenanced a “show trial” of Johnson because of her “personal rivalry” with him.