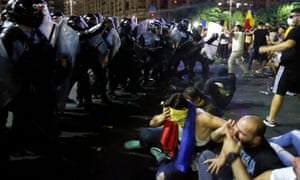 Tens of thousands of protesters have rallied in cities across Romania against the ruling Social Democrat (PSD) government, with riot police in the capital, Bucharest, firing tear gas into the crowd and hundreds needing medical attention.

Old boy networks, mafia and doom for — but they will lose Three friends of the president have quietly influenced decisions at the Department of Veterans Affairs, including the firing of the secretary. They seem to be growing bolder. German pharmaceutical company Fresenius Kabi had argued Nebraska cannot use its drugs to carry out an execution. A judge ruled that the execution can go ahead.

Faux-Hindu fascism flies low into racist bile With elections around the corner, the Vasundhara Raje government has approved a long-pending demand: renaming villages with Muslim-sounding names with names rooted in Hindi.

An F.B.I. agent was found not guilty of lying about firing his gun during a 2016 confrontation in Oregon when a leader of an armed militia was killed.

China’s business and energy ties with Iran do not harm the interests of any other country, the country’s Foreign Ministry said, after U.S. President Donald Trump said companies doing business with Iran would be barred from the United States.

The latest harassment and deportation of Jewish American activists is significant for one reason: it sends a message to liberal and left-wing Jews around the world that they are unwelcome here, and that they should be ready to face the consequences if they try to enter. The irony of Israel recently crowning itself as the “Jewish Nation-State” at the same time as it is turning away increasing numbers of Jews due to their political views should not be lost on anyone. Yet despite all the fear mongering, harassment and intimidation, Jews will remain a central part of the struggle against the occupation and for justice in Israel-Palestine. That will likely mean more interrogations, more deportations, more blacklists, and more silencing of dissent. That means that for American Jews, like it has always meant for Palestinians in the diaspora, the fight for justice in Israel-Palestine may soon only be possible from afar.

In Europe, surveillance indicates that the 2018 West Nile fever transmission season started earlier than in previous years and with a steeper increase of locally-acquired human infections. Between 2014 and 2017, European Union/European Economic Area (EU/EEA) and EU enlargement countries notified five to 25 cases in weeks 25 to 31 compared with 168 cases in 2018. Clinicians and public health authorities should be alerted to ensure timely implementation of prevention measures including blood safety measures.