Greed is what blocks Facebook’s attempts to deal with trolls The influence campaign revealed on Tuesday is adapting and evolving to better disguise itself, which limits the social network’s approach to stopping it.

The Ministry of Health, the Democratic Republic of the Congo has confirmed 4 new cases of an ebolavirus infection in a new loaction of the country. Earlier there had been reports of 26 cases of fever, diarrhoea, vomiting, nasal bleeding and death since May. There have been at least 20 deaths attributed to the outbreak thus far.

Lab results now confirm this as the second geographically discrete outbreak in 2018 for the DRC.

Map of the Democratic Republic of the Congo from the World Food Program via ReliefWeb. North Kivu Provincde is klocated in eth northeeastern region of the DRC, on the eastern  border

Which member of the genus Ebolavirus?

No details are available on the specific species of ebolavirus so it remains unclear if the Ebola virus (the one specifically deiosgend to pretect ffomr disease due to members of the species Zaire ebolavirus) vaccine can be used. If it can, hopefully, it will be deployed more quickly than in the last outbreak.

The Government of the Democratic Republic of the Congo #DRC

Where in the DRC?

Map of the DRC from Congo Initiative.

The suggestion so far is that the outbreak has occurred in the Province of North Kivu in a place called Mangina in the eastern Mabalako health zone, about 30 kilometers (18 miles) west of Beni, a city of more than 230,000 people and that it is a distinct outbreak from the one that occurred about 1,800km (from the city of Mbandaka to that of Butembo according to Google Maps) to the east earlier this year. That will become more clear once some detail becomes available. These would include contact tracing of the earliest cases to see if there is any history of travel from the Equateur province, and also genetic details from sequencing the newly identified ebolavirus strains to look for differences and similarities to those viruses characterised from the western outbreak.

Pinpointing Mangina in the DRC. Map snipped from GeoHack.

This region of the DRC is suffering from conflict (including thousands of cases of sexual violence), food insecurity and the displacement of many people. The Province borders and actively trades with Uganda and Rwanda, with waterways in abundance as this is part of the African Great Lakes region. Mangina seems to be removed from the waterways but we armchair observers await better maps to get an idea of the layout.

It is interesting to see in the map to the left, that the town of Bundibugyo in the self-name district of Uganda, is not too far off. An ebolavirus species, Bundibugyo ebolavirus (BEBOV), was named after a virus isolated from outbreak cases in this region in 2007.

This region will bring a raft of new challenges to the containment of ebolavirus outbreak.

Despite high levels of vigilance for Ebola virus cases on the other side of the country, this outbreak may have been percolating for 2 to 3 months. The harsh reality of how difficut it is to keep on top of emerging virus outbreaks when they occur in relatively remote, under-resourced regions suffering conflict is exemplified by this one.

The post A second outbreak of an ebolavirus in the DRC appeared first on Virology Down Under.

Why would anyone ant to back Musk in China? Just saying Tesla Inc said on Wednesday that it would raise capital from Asian debt markets to fund the construction of its third “Gigafactory,” which will be located in Shanghai and cost an approximate $2 billion.

The Druse minority have long fought for the Jewish state. Now they are fighting for equality, which is missing from a law declaring Israel “the nation-state of the Jewish people.”

Do no evil… forget something is pursuit of profit? Google withdrew from China in 2010 to protest the country’s censorship. Now the internet giant is working on a search engine that complies with Chinese censorship rules.

CHECK YOUR REGISTRATION STATUS.  You can usually do it at the website of your local secretary of state, or at Vote.org.

Anyone who follows me from Georgia?  If not, pass it on.

sigh..  Actually, let me just add, THIS BULLSHIT RIGHT HERE, THIS IS WHY YOUR VOTE MATTERS.  You think they’d be so hot to take away your rights if it didn’t?

If you can register to vote by mail DO SO!!! Not only does it give you more time to research your ballot options, it provides a paper trail, so you can PROVE how you voted, no matter how the Russian hackers massage the electronic numbers.

Hi everyone who is not American, our country is corrupt and does shit like this

Before I start, my problem is not with the young woman\ teen Ahed. On the contrary, the girl always impressed me as a child, and I continued to like her way of resistance with her family and villagers in Nabi Saleh. Somehow, a different flavor in the way we introduce resistance. And above all the girl is strong and of course charming.

For many reasons, Ahed resembles a new image for resistance, and she is lucky her pledge has been heard and got attention. But Ahed is not a star, nor is she inside a contest or a live TV competition. She is living under occupation where her pledge is the pledge of millions of Palestinians. When resistance becomes one person, then the problem starts. When prisoners issue becomes the attention because of Ahed, then there is a severe issue of hypocrisy in the society at all its levels.

Where are those voices for all the prisoners who are perishing in jail for resistance?

The rush of all to go and be part of Ahed’s stardom and take a picture next to her. Her visit with her father to the tomb of Arafat. The reception Abu Mazen held for her in the Muqata’a. Not to forget of course that her mother was arrested with her and was released as well.

So what is it about Ahed that makes her a good pick for media and politicians and parasitic beneficiaries?

The girl is daring and enigmatic, but she is not anything more than her young age and innocent looks of overwhelmingness.

Some months ago, a year maybe, there was a younger female prisoner who was released after a few months of detention. The eyes of horror in the teen’s eyes tell all the stories of what it means to be locked inside a jail. To be a child stripped away of your childhood.

Ahmad Manasra who lost his childhood to jail.

While the feast is over, and Ahed will become a teenager dreaming for a university alone, after securing a good result in the final exams, for the privilege of Jail, and many offers to study for free.

Can Ahed become a Malala?

In an ordinary place she can carry on the fight for freedom Malala represented….. seeing the crowds behind her …can only put her in one of the few options in the easy access to power in this place. Used by those who will benefit from her, until she becomes another icon that reflects the reality of the Palestinian abused resistance.

And when mosquitoes or the viruses adapt? Then what? 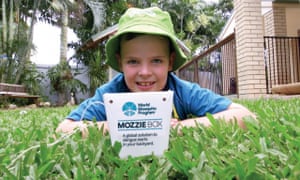 The first large-scale deployment of mosquitoes infected with Wolbachia bacteria, which makes them unable to transmit viruses, has stopped all outbreaks of dengue fever in a city in northern Australia for the last four years.

The success of the project in Townsville, Queensland, will encourage hopes that Wolbachia can provide a knockout blow against the Zika virus in Brazil as well, where the mosquitoes have been introduced into the favelas of Rio de Janeiro. Until now, the technology has looked promising but has only been tried in small pilot projects around the world of 1 to 1.5 square km.