ROTFLMAO Turkey will resort to international arbitration if the United States blocks the sale of F-35 fighter jets to Ankara, President Tayyip Erdogan was quoted as saying by broadcaster Haberturk on Sunday.

Trumputin not working so well. The Communist Party leader said the proposed changes mean that people will get their “pension in their coffins.” The proposal to increase the pension age is widely unpopular. 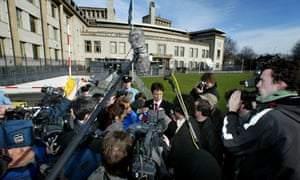 A prominent Belgrade lawyer who once helped to defend the late Serbian strongman Slobodan Milosevic has been shot dead, gangland-style, in front of his home, police said.

Dragoslav Ognjanović, 57, was gunned down in front of his apartment building in the Novi Beograd neighbourhood and his 26-year-old son was wounded in his right arm in the incident on Saturday, Serbia’s interior ministry said in a statement.

We Can Pay For Free College The Same Way We Paid For A Pointless $5.6 Trillion War