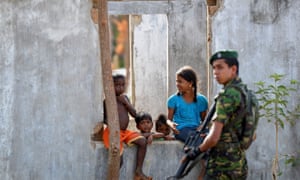 Sri Lanka’s progress towards reform has “virtually ground to a halt” and brutal torture is used with impunity, the UN concludes in a scathing report on the country’s human rights record.

The report, which comes three years after the country appeared to have turned a corner in its history by electing a new coalition government, is published on Monday following a UN visit to Sri Lanka at the request of the government. “None of the measures so far adopted to fulfil Sri Lanka’s transitional justice commitments are adequate to ensure real progress,” it says.

The NRA’s attempt to deflect blame away from guns for the Parkland shooting just fell apart:

National Rifle Association spokesperson Dana Loesch dismissed new findings that a school-based discipline program called Promise was not responsible for the Parkland, FL, school shooting after pushing the allegation for months that the program allowed the shooting to happen.

Parkland school shooter Nikolas Cruz had been referred to Broward County’s Promise program, an alternative option for students “who have committed a behavioral infraction that would normally lead to a juvenile delinquency arrest” in 2013 after he vandalized a bathroom in an area middle school. Despite claims that referring Cruz to the program contributed to the failures to report his behavior to law enforcement, a commission set up to investigate the mass shooting concluded the program was “irrelevant” to Cruz’s ability to obtain an assault weapon and carry out the massacre.

During the months following the February 14 mass shooting at Marjory Stoneman Douglas High School that left 17 people dead and 14 others injured, NRA spokesperson and NRATV host Dana Loesch repeatedly shredded the “Obama-era” Promise program during her show, Relentless. During the May 29 edition of her show, Loesch suggested people should protest outside the house of President Barack Obama’s secretary of education, Arne Duncan, because it was his “Promise program initiative that assisted this murderer.”

Loesch said “the real story” behind the Parkland shooting is Broward County Superintendent Robert Runcie “worrying about the appearance of complying with an Obama-era Promise program” which ultimately “guaranteed that this murderer’s red flags would being completely overlooked” during the June 1 edition of Relentless. Four days later, she insisted Duncan’s “policies that were implemented that coddled this murderer failed” Parkland students.

One day after the Miami Herald reported the commission’s findings, Loesch did a segment on the commission’s work that discussed the Promise program but ignored the revelation that it was found to have no causal relationship to the shooting.

During the July 13 edition of NRATV’s Relentless, Loesch referenced a tweet Runcie wrote in which he echoed the commission’s finding and said she questioned “how much” she believes him. She went on to place blame squarely on the superintendent, saying if the findings are true, “wouldn’t that just mean that it was his own personal incompetency then that contributed to this instead of a bad program? I mean, that seems like it’s worse.”

“Schiff said Saturday that while the documents show the FBI’s “legitimate concern” about Page, he said the materials should not have been released during a pending investigation.

“These national security considerations were cast aside by President Trump, whose decision to declassify the Nunes Memo — which misrepresented and distorted these applications — over the fervent opposition of the Department of Justice, was nakedly political and self-interested, and designed to  to interfere with the Special Counsel’s investigation,” the lawmaker said.”

First, the yarn didn’t look like anything she’d seen in years of examining Norse fibres. Second, why would the people of the Arctic — highly skilled clothesmakers — need to learn such a basic technique from anyone else?

“The idea that you would have to learn to spin something from another culture was a bit ludicrous,” she said. “It’s a pretty intuitive thing to do.”