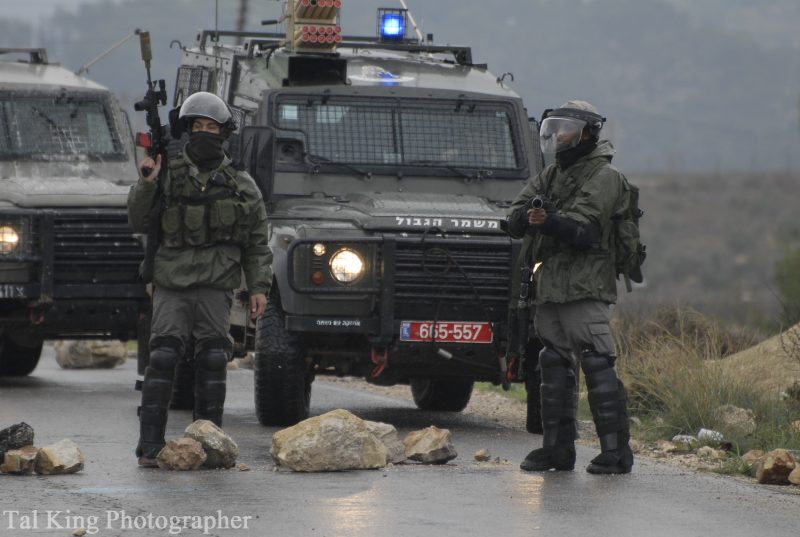 If adopted, a proposed bill could ban the filming and photographing of Israeli soldiers on duty. Photo by Flickr user Tal King (CC BY-NC 2.0)

When Israeli police brought in bulldozers to demolish the Palestinian village of Khan al-Ahmar on 4 July, the small community of 200 people did not stand still.

One video that made the rounds online showed Israeli military officers ripping off the headscarf of a woman protester as they were beating her, before wrestling her to the ground and taking her away.

Such violent encounters with the Israeli military and security forces have long been commonplace in Israeli-occupied Palestinian territory. Documenting and speaking out against such encounters is possible and has become much easier in the past decade, with the advent of smart phones.

But it may soon become more difficult — or even illegal. Israeli legislators are pushing two bills that would further restrict speech by activists and journalists critical of its policies in Israeli-occupied Palestinian territory.

The first bill would place restrictions on the filming and photographing of Israeli Defense Forces (IDF), prescribing a five-year prison term against anyone convicted of “filming, photographing, and/or recording soldiers in the course of their duties, with the intention of undermining the spirit of IDF soldiers and residents of Israel.” If a court ruled that the photographer’s intention was to “harm [Israeli] state security,” the penalty would extend to ten years in prison.

The “Prohibition Against Photographing and Documenting IDF Soldiers” would also criminalise the dissemination of the photos or footage on social networks and mainstream media.

The second bill would streamline processes for government officials to demand that social media platforms remove online content considered “incitement to violence”, and is set to be approved by the Knesset.

Knesset member Robert Ilatov described the first bill as a response to “harassment” of Israeli soldiers by “left-wing operatives” at the Gaza-Israel border, where IDF officers have violently dispersed protests.

Since 30 March 2018, thousands of Palestinians living in the besieged Gaza Strip have gathered at the border with Israel for the ”Great March of Return” protests, marking 70 years since 700,000 Palestinians were forced to flee during the creation of the state of Israel, events known as Nakba in Arabic (translated as catastrophe or disaster).

The protesters are demanding the right to return for those who were displaced and their descendants, along with an end to the 11-year Gaza blockade. Since protests began in late March 2018, Israeli forces have killed at least 138 protesters and injured thousands.

Two journalists were killed and several others injured when they were hit with live ammunition fired by Israel Defense Forces (IDF), while covering the ”Great March of Return” protests.

On 6 April, Yaser Murtaja, one of the founders of the independent news agency Ain Media (“Eye Media”), was shot by Israeli forces. He died later that night of his injuries. “When shot, he was wearing a vest with the inscription ‘Press’ that clearly identified him as a journalist,” Reporters Without Borders said.

In a 15 May statement, RSF submitted a request to the International Criminal Court to investigate “the direct shots that IDF snipers have fired at some 20 Palestinian journalists during the “March of Return” protests in Gaza.

Why shield soldiers from public scrutiny?

In its explanatory note, the bill refers to “a worrying phenomenon of documentation of Israeli soldiers” by non-governmental organizations engaged in documenting violations against Palestinians.

One such organization is The Israeli Information Center for Human Rights in the Occupied Territories, better known as B’Tselem. On 4 July, B’Tselem’s field researcher director Kareem Jubran was arrested as he was filming preparations for the forcible removal of the community of Khan al-Ahmar, before he was released the same day.

“As an organization, we have had staff members beaten, harassed and arrested,” B’Tselem spokesperson Amit Gilutz told Global Voices. Giltuz views the bill as part of a government led campaign that portrays those who “advocate for the human rights of all people living between the Jordan River and the Mediterranean Sea” as ‘traitors’.”

“What is clear is that the documentation of the reality that Israel is trying to hide – instead of changing – will continue nonetheless,” he said.

While the bill’s adoption may not stop activists and rights groups from documenting Israeli policies and practices in occupied territories, its impact will particularly be felt among Palestinian communities and activists.

Nadim Nashif, the executive director of the Arab Center for the Advancement of Social Media, told Global Voices:

This bill aims solely for censorship of commonplace Israeli forces’ human rights violations under the motto of “if it isn’t recorded, it didn’t happen.” If passed, it will dangerously increase the impunity of Israeli soldiers and further endanger Palestinians that have already been stripped of almost all means to protect themselves and advocate for their basic human rights.

Palestinians resisting the occupation already face a myriad of threats and restrictions, including violence, administrative detention, imprisonment and repressive laws. Those who turn to social media to criticise human rights violations and Israeli occupation policies or to simply show the everyday realities of occupation face arrests and prosecution for incitement.

The ‘Removal of Terror-Inciting Content from Social Media’ bill

And there’s the second bill. The Removal of Terror-Inciting Content from Social Media Bill would criminalise content the Israeli government considers an “endangerment to personal, public or national security,” or speech that “could severely damage the Israeli economy or infrastructure,” local media reported.

This would double down on existing practices of prosecuting people for online speech and asking social media companies to remove allegedly inciting content. Incitement to violence is already illegal under Israel’s 1977 penal code and under the 1945 Emergency Regulations.

In September 2016, Palestinian activists documented numerous suspensions of personal Facebook accounts of Palestinian journalists and media pages. Four editors at the Palestinian Shehab News Agency and three journalists from Al Quds News Network, which both have millions of followers, had their personal accounts shut down. Supporters responded, protesting online under the hashtag #FBCensorsPalestine. Facebook later apologized for the suspension and said that it was mistake.

Critics say the bill represents a threat to freedom of expression. A new report by the Israel Democracy Institute concluded that the bill sets a “dangerous legal precedent” and “opens the door to the dangers of state censorship”.

According to the report’s authors Tehilla Shwartz Altshuler and Rachel Aridor-Hershkovitz:

The use of administrative law ex parte, with no admissible evidence to determine whether a criminal act has been committed, is an unprecedented international juridical act.

Social media companies, Facebook in particular, already face accusations of “complicity” in censoring Palestinian speech. One of the bill’s initiators Justice Minister Ayelet Shaked declared that Facebook complies with ”most of the state’s requests to remove inciteful [sic] content”.

Source: US rejects visa for six Palestinians who were to attend UN forum – PNN

During their detention last month in a U.S. Customs and Border Protection facility in Laredo, Texas, Karen and her two young sons were constantly cold. The family, which fled violence in Honduras, slept on a hard floor in a holding cell without mattresses, she said, their clothes still wet from crossing the Rio Grande. Hungary will not sign the UN’s first compact on global migration, after all UN member nations except the US approved the draft to be signed in December. Prime Minister Viktor Orban has taken a tough stance on migration. The man who supplied a gun to the National Socialist Underground terrorist group has been set free on bail, having served two-thirds of a 10-year sentence. The German neo-Nazi scene had campaigned for his release.

Really? Fool on the Hill

President Donald Trump says he does not believe Russia is still targeting the United States, contradicting US intelligence assessments that Moscow was continuing its attempts to meddle in American elections.

sad addition to our racist history. A cemetery found on a construction site is believed to contain remains of African-Americans forced to work on plantations through the so-called convict lease system.

On Oct. 5, 2016, with one National Prayer Breakfast under her belt, Ms. Butina direct messaged a Russian official on Twitter: “We made our bet. I am following our game. I will be connecting the people from the prayer breakfast to this group.”

After the election, Ms. Butina informed someone the complaint called “U.S. person number one” that she would be bringing along some “VERY influential” Russians to the breakfast. After the event — which President Trump attended, just as previous presidents have — Ms. Butina emailed one of its organizers to thank him for “the gift” of his “precious time during the National Prayer Breakfast week — and for the very private meeting that followed. A new relationship between two countries always begins better when it begins in faith.”

He said it – no one forced him to be a bigoted fool – it cannot be walked back. Tesla and Musk’s time is up! The tech billionaire had faced mounting criticism for calling the British diver a pedophile after the man criticized Mr. Musk’s submarine.