Is the US president’s outburst to the Sun simply bad manners, or his latest attempt to undermine an old ally?

A disunited Europe is Putin’s goal and, hence, a must do for #PuppetTrump! U.S. President Donald Trump said a free trade deal with Britain might be impossible if it went ahead with Prime Minister Theresa May’s proposals for post-Brexit ties with the European Union, in a damaging intervention set to further criticism of her plans.

Since the beginning of the current academic year (2017-2018), scores of foreign passport holders, many of Palestinian origin but without residence documents, living and working in the occupied Palestinian territory have been denied entry in the country, or have had their visa renewal applications refused by the Israeli authorities. At Birzeit University alone, 15 visa renewal requests of foreign passport-holding faculty members have been refused or significantly delayed.

These faculty members have full-time status, work in all the various faculties on our campus, and include senior faculty and department chairpersons. Our faculty who are currently under threat teach in the BA, MA, and Ph.D. programs at Birzeit University, are members of university committees, and serve the larger Palestinian community through public seminars and lectures. Already some professors have been forced to leave the country; including one from the Department of English and Literature, and a professor of European History at the Ibrahim Abu Lughod Institute for International Studies who has devoted his entire academic career to Palestine and the university for the past four decades.

These international professors play a critical role not only in the ongoing provision of quality education at Birzeit University but also in the long-term development of Palestinian higher education. If this policy continues, Palestinian universities, including Birzeit University, will be further isolated from the global academic environment. Our ability to deliver a world class education will be further compromised if we lose the international perspectives, diverse professional experiences and high-level skills these faculty members crucially bring to Palestinian academic life and the campus environment as a whole. In the global academic environment of the 21st Century, having an internationally diverse faculty has become a fundamental cornerstone of academic excellence at universities worldwide. If Birzeit University and Palestinian higher education as a whole are denied the right to engage international faculty members, what is ultimately being denied is our right to deliver a quality and standard of education that meets the accepted global norm.

The right to education is a fundamental human right as established in Article 26 of the Universal Declaration of Human Rights. That article simultaneously underlines the critical link between education and the furthering of global perspectives, understanding and connection  between diverse peoples and nations:

Education shall be directed to the full development of the human personality and to the strengthening of respect for human rights and fundamental freedoms. It shall promote understanding, tolerance and friendship among all nations, racial or religious groups, and shall further the activities of the United Nations for the maintenance of peace.

A long line of UN Security Council and General Assembly resolutions, and rulings of the International Court of Justice affirm Israel’s obligation to exercise its responsibility as the occupying power in West Bank, including East Jerusalem, and the Gaza Strip in accordance with international humanitarian law (including the Hague Convention of 1907 and the Fourth Geneva Convention of 1949) as well as applicable international human rights law. Israel is obligated by international law to both protect and facilitate the functioning of Palestinian civil institutions, including higher education. All states that are signatories to these resolutions also bear a responsibility to ensure that Israel exercises its obligations towards Palestinian education under international law; including that itexercises its control over the entry and presence of foreign academics in a manner that avoids unnecessary harm to Palestinian higher education and to the occupied population’s fundamental right to education.

Birzeit University called on everyone – including governments, institutions, academics, and associations – to decry these policies, protect our fundamental right of academic freedom at Birzeit University and for all Palestinian higher education.

David Schnare’s conservative legal group seeks to discredit climate science. But it appears to be imploding amid allegations of financial mismanagement, attempted extortion and faked documents.

None of his fans pay any attention, it seems, to anything but what he says and what Fox news says – bubble people 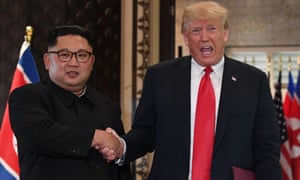 Donald Trump has released a letter he received from North Korean leader Kim Jong-un while touting “great progress” in negotiations between the United States and Pyongyang – despite reports of a breakdown in talks.

“A very nice note from Chairman Kim of North Korea. Great progress being made,” the president said in a tweet that included both a copy of Kim’s letter, dated 6 July, and its translation.

As of Thursday morning, the Trump administration had completed reunification for eligible children younger than 5 who were separated from their parents, the U.S. Department of Health and Human Services said in a statement.

Source: Trump administration reunites just over half of migrant children under 5 with parents, says others are ‘ineligible’

China can fully meet the needs of its state soybean reserves without importing from the United States, an official with the state stockpiler told state TV on Thursday.