Internal emails show the E.P.A. administrator had an employee pursue a meeting with Chick-fil-A’s chief executive to discuss a “business opportunity” for his wife.

Leyla Alasgar qizi Mammadbeyova, born Leyla Zeynalova, was the first female pilot in the Caucusus, Southern Europe and Middle Eastern region, as well as being a flight instructor who trained many other pilots. Mammadbeyova was famous across her native Azerbaijan,…

Israeli soldiers shot 16-year-old Samir Awad eight times in the back, killing him. After a two-year delay, they were finally indicted. Now the prosecution has announced that it is dropping the charges against them.

Samir Awad is evacuated for medical treatment after being shot in the back of the neck by Israeli soldiers, January 13, 2013. (Nader Morar/B’Tselem). Awad later died from his wounds.

The two former soldiers, whose names are under gag order, had been charged for the “reckless and negligent use of a firearm” that killed 16-year-old Samir Awad near the village of Budrus in 2013. Awad was shot in the back eight times by soldiers who had been lying in ambush near a hole in Israel’s separation barrier. He was not armed, nor did he pose a threat to anyone. He was running away when he was killed.

The army claimed Awad was attempting to damage part of the separation barrier when the soldiers opened fire.

The case has been ongoing since 2015, when Israeli authorities — after a more than two-year delay — finally indicted the two soldiers.

Why, after three years of legal proceedings, did the prosecutor decide to drop the charges?

During a hearing in the Ramle Magistrate’s Court in early May, the prosecutor admitted the case against the soldiers had been “badly damaged.” The defense had argued that prosecuting the two soldiers for illegally killing Samir would constitute “selective enforcement” of the law. To prove their point, they demanded that the state reveal statistical data regarding criminal investigations and prosecutions of other soldiers who have killed Palestinians, as well as the case materials themselves. Israeli authorities did not want to provide those files, on which the outcome of the case likely depended.

“The prosecutor’s announcement of the cancellation of the indictments against the two soldiers involved in the killing of the youth Samir Awad constitutes another example of the impunity enjoyed by soldiers who wound Palestinians,” Yesh Din said in a statement issued in response.

“The bottom line is that the military system protects soldiers who violate the law and wound Palestinians, while leaving Palestinians defenseless,” the statement continued.

It took Israeli authorities more than two years to indict the soldiers who shot Samir — only after Ahmad Awad, Samir’s father, sued, with the help of Israeli human rights NGO B’Tselem, to force the Military Advocate General to either file an indictment or close the investigation.

By the time authorities finally reached a decision to prosecute, the two soldiers were no longer under the jurisdiction of the military justice system. They were being tried for a crime they committed during their military service by civilian prosecutors in a civilian court unequipped to adjudicate military matters. After the prosecution’s announcement, they will walk free. 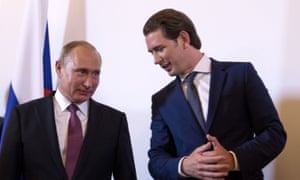 Vladimir Putin lobbied for the phasing out of economic sanctions and dodged questions about the shooting down of flight MH17 during his first state visit to an EU member state since being re-elected as Russian president in March.

“Both those who initiate these actions and those such measures that we call sanctions are aimed against find them harmful,” Putin said in Vienna on Tuesday, claiming that European countries were merely “finding it hard to say so”.

Fox News may have hit on a problem as it looked to report on Donald Trump’s decision to disinvite the Philadelphia Eagles from a White House visit “because he insists that they proudly stand for the National Anthem, hand on heart, in honor of the great men and women of our military and the people of our country.” The hitch being that none of the Eagles’ players knelt for the anthem last season (some players did stage other protests such as raising fists).

In search of striking images, Fox used pictures of Eagles players taking a knee on the field suggesting they had knelt for the anthem. Those players were not protesting at racial injustice though: they were praying as players across the league have done before games for years. Eagles tight end Zach Ertz, who is a committed Christian, tweeted his displeasure at Fox on Tuesday: “This can’t be serious…. Praying before games with my teammates, well before the anthem, is being used for your propaganda?! Just sad, I feel like you guys should have to be better than this.”

Mueller’s team has asked the court to revoke or revise Manafort’s release conditions, including his bond and house arrest, in the wake of the filing, which was first reported by Reuters.

FBI agent Brock Domin said in the filing that Manafort attempted to contact witnesses via phone call, text and encrypted messages to two people from “The Hapsburg Group,” which Manafort had worked with to lobby for Ukrainian interests.

Domin said that Manfort’s attempts at contact were “in an effort to influence their testimony and to otherwise conceal evidence,” and that the probe into the matter was still ongoing.

Manafort has pleaded not guilty to the charges, which are not directly related to his work for the Trump campaign.

His former business associate, Rick Gates, pleaded guilty to one count of conspiracy against the United States and one count of making a false statement to the FBI agents investigating Russian interference earlier this year as part of a plea deal with Mueller’s team.

A grand jury also indicted 13 Russian nationals and three Russian companies earlier this year for allegedly meddling in the 2016 election.

Trump has spoken out about Manafort in recent days, slamming the FBI and Department of Justice for not telling him that agents were “secretly investigating” Manafort during the 2016 presidential campaign.