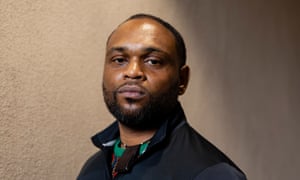 Exclusive: records show police surveilled and tried to charge a citizen journalist attacked at a California rally. Does it fit a pattern of punishing black protesters?

Cedric O’Bannon tried to ignore the sharp pain in his side and continue filming. The independent journalist, who was documenting a white supremacist rally in Sacramento, said he wanted to capture the neo-Nazi violence against counter-protesters with his GoPro camera.

But the pain soon became overwhelming. He lifted up his blood-soaked shirt and realized that one of the men carrying a pole with a blade on the end of it had stabbed him in the stomach, puncturing him nearly two inches deep. He limped his way to an ambulance.

The singer and songwriter has spun tragedy into plainly angry action on her new album, “Hell-On.”

They want campaign money and do not mind sacrificing children to get elected! Since a few big banks restricted financing for the gun industry, some lawmakers — many of them Wall Street allies — are looking for ways to squelch what they see as social activism.

hates all workers and their unions #TraitorTrump WASHINGTON (Reuters) – President Donald Trump on Friday signed three executive orders designed to make it easier to fire federal government workers and to crack down on the unions that represent them, drawing immediate criticism from a group representing federal employees.

Harley-Davidson Plant moving from Kansas to South East Asia and Trump paying off for Chinese loan for his Indonesia hotel! #TraitorTrump! WASHINGTON (Reuters) – The Trump administration told lawmakers the U.S. government has reached a deal to put Chinese telecommunications company ZTE Corp back in business, a senior congressional aide said on Friday.

Sadly, the world will have to wait for more serious people to step in and help negotiate what could be the defining achievement of Trump’s presidency. For now, hotheaded John Bolton and carnival barker Trump should let Secretary of State Mike Pompeo and others continue working to put together the framework of a real summit that could have a real chance for real results. Please, no more talk of the Nobel Peace Prize, no more coins, and no more threats. Millions, if not billions, of lives are at stake because a madman has his finger on his nuclear button, and an unpredictable bully has his finger on our nuclear arsenal.

Rights groups have called on Saudi authorities to release all activists arrested for campaigning for women’s rights. The kingdom’s reforms have come under fire for not doing enough to protect activists.

You will NOT be policing Black bodies.

You will NOT be taking away the First Amendment rights of these American Citizens.

Here is the bullshyt policy that the NFL has come up with:

Here is the Player’s Union Response:

.@MichelleDBeadle reacts to the NFL’s discussion on possibly including a 15-yard penalty for kneeling during the national anthem. pic.twitter.com/XfKnxEKTFd

This is about trying to control Black men’s bodies and minds.

That they don’t have the right to their own opinions, and to express them freely.

Them taking the knee had nothing to do with insulting the military or the flag. It had to do with this:

If the NFL thing was about the flag & anthem, you’d be outraged when Trump doesn’t hold a hand over his heart & botches the words. If it was about troops, you’d be as pissed about Niger as about Benghazi. It’s not principle. It’s about control of brown bodies. Stop the bullshit.

Here is what eagles RT Lane Johnson texted me about the leagues new anthem policy “Ultimately it is taking the players voice away…I think there will be some backlash from their decision.”

Yes….this is going to be bad.

And, why they kneel.