El Supremo Twits and is still aiming to be biggest a-hole in universe! WASHINGTON (Reuters) – U.S. President Donald Trump said on Wednesday he asked his commerce secretary to considering opening an investigation into the effect of vehicle imports on national security, a move that could lead to the imposition of tariffs.

“After controlling for [other] factors, we still find that temperature is a strong predictor of antibiotic resistance.”

Approximately 1,600 people were detained during 5 May anti-Putin protests, including 158 children.

How stupid are Brexit Brits? Be hard to find any dumber east of Trump. 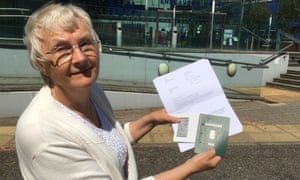 Home Office tells Inga Lockington, who moved from Denmark in 1979, it ‘cannot be satisfied’ she is permanently resident

A former mayor of Ipswich, who has lived in the UK since 1979, has been denied UK citizenship.

Inga Lockington, who has been a Liberal Democrat councillor for 19 years and served as mayor in 2007, moved to the UK from Denmark in 1979, when she married her British husband, Tim.