The policy of Judaization and ethnic cleansing practiced by the occupation authorities to displace the Palestinian population fro m their land and tighten their life, and expansion of settlements and military areas are continued in violation of international law based on discrimination, racism and hatred. According to the information by ” Sant Eif Organization” which specialized in following up the legal matters, has  said, the occupation government and its army have called for the transfer of the administrative demolition to the West Bank C areas, which means giving the Civil Administration extensive powers to demolish houses and facilities without referring to the courts. Thus, it issued a military order to remove the new buildings and to demolish any building under construction within six months. The military order includes any residential building that does not exceed 30 days from the date of entry into force, even if the building is completed. This military order comes into force on 17-4-2018 signed by the military ruler.

Those military orders are part of the policy of forced displacement adopted by the Israeli occupation authorities, which aims at displacing the Palestinian population from their land and tightening the siege on them, to expand the settlements and the military areas, which is a serious violation of international humanitarian law and escalates to war crimes based on discrimination and ethnic cleansing.

On the other hand, the chapters and repercussions of the Nakba and the massacres of Palestinian cities and villages coincided with the opening of the American Embassy in Jerusalem and the American’s recognition of it as the capital of Israel in violation of international law and resolutions of international legitimacy, including Security Council resolution 478 , which assert that East Jerusalem is occupied territory, and that the issue of Jerusalem is a final status issue, and its future must be resolved through direct negotiations.

Within this context, two-thirds of the members of the UN Security Council expressed deep concern over the failure to implement a resolution in 2016 calling for an end to Israeli settlement construction in the occupied West Bank. The UN’s envoy to the Middle East, Nikolai Mladenov, told the Council last year that Israel was putting an end to the demand for a halt to settlement construction. The National Bureau considered that the decision of the Palestinian leadership to refer the settlement file to the International Criminal Court is an important tool to submit complaints and prosecute the occupation leaders, as settlement and ethnic cleansing are war crimes.

On the eve of the transfer of the US Embassy to the occupied city of Jerusalem, the Israeli government decided on 13-5-2018 to allocate NIS two billions to strengthen Israeli sovereignty on theeastern part of the city, besides, allocation of about NIS 350 million to develop the surrounding areas of the occupied old town, including organizing Jewish events in the Mount of Olives, and upgrading the quality of cleaning and maintenance services in public places and the restoration of the Jewish cemetery at Mount Olives.

The Israeli occupation government has also decided to control various parts of East Jerusalem and allocated NIS 50 million to confiscate lands from the neighborhoods of Beit Hanina and Sur Baher  by the end of 2021, to be completed until 2025. The so-called Minister of Justice, “Israel” Elite Shaked said, “We will strengthen our presence in East Jerusalem, and we have already begun to impose Israeli sovereignty over East Jerusalem..

At the same time, the Israeli government gave the green light to invest US $ 56 million for a cable car project linking West Jerusalem to the old town of East Jerusalem. Israeli Tourism Minister Yariv Levin, said on the eve of the official transfer of the US embassy from Tel Aviv to Jerusalem, “This project will change the face of Jerusalem because it will facilitate the arrival of tourists and visitors to the Western Wall. The cable car, which has a length of 1.4 kilometers, can transport 3,000 people an hour in both directions at 21 km ph. According to his estimations the project will be ready and operated by 2021.

In addition, the Municipality of Nir Barak supports and encourages the Government to construct 4 buildings in the Gilo settlement project south of Jerusalem, each of which includes 22 housing units. This will increase the number of housing units in each project by 88 ones. The housing units will be different in size, and cost between NIS 2 million and NIS 2.7 million in 2019, 12 units have already been sold. According to Avi Tservati, Deputy Director General of Tsrifati Shimon, who oversees the construction of the “Tsrifati Pisgat Ze’ev” project, according to Israeli data, a total of 2,164 housing units have been built in Jerusalem since the beginning of the current decade. Building permits issued in 2016 and 2017 are the most important factor in the increase number of building, most of which are located in Pisgat Ze’ev. The new Tsrifate Pisgat Zeev project includes the construction of 92 new housing units in four buildings, 2 of which are 7-8 floors tall and 2 others 6-7 floors, each floor consists of 3residential units. According to Hebrew sources, American Ambassador to Israel David Friedman, financed the organization of the Friends of the Religious School “Commute” in Beit El in 2013 for $ US 12,000, with the aim of foiling any attempt to evacuate any Jewish settlement in the West Bank.

A parliamentary committee in United Kingdom released a report saying the British government is being undermined by the laundering of proceeds of Russian corruption. The money finances Moscow’s agressive foreign policcy.

As state governments develop plans to introduce sports betting, some American Indian tribes in the casino business are working to make sure they’re dealt in.

Shocked by the encounter, Ms. Suda retrieved her cellphone from her car, hit record and confronted the agent as he was relaying their information over a radio inside his sport utility vehicle. They had been racially profiled, Ms. Suda told the agent. “It had nothing to do with that,” the officer, who identified himself as Agent O’Neal, responded in the cellphone video. “It’s the fact that it has to do with you guys speaking Spanish in the store in a state where it’s predominantly English-speaking.”

The event was held at Lake Merritt, where two black men were hassled for grilling. “It was a sea of love and blackness and food and fun,” an organizer said. The cover of the English version of MSB’s brochure If Crisis or War Comes.

Lyssna: New brochure to prepare Swedes for crisis or war

A brochure titled If Crisis or War Comes will soon be sent out to all Swedish households. The Civil Contingencies Agency is behind the initiative – the first of its kind since the Cold War.

The aim of the pamphlet is to help Swedes become better prepared for everything from serious accidents and extreme weather to IT attacks and military conflicts. Nevertheless, Dan Eliasson, director-general of the Civil Contingencies Agency (MSB), says there is “no cause for alarm”.

“We want to give support regarding how to prepare for an emergency or a crisis because it can happen, but Sweden is still a safe country to live in,” Eliasson told Radio Sweden.

Project manager Christina Andersson said her team has put considerable effort into ensuring people who do not speak fluent Swedish get the information. Her team, she said, is also aware that many newly arrived immigrants have come from countries that are already at war or in deep crisis.

“To that group we want to say that we don’t send out this brochure because of any acute danger…But people have the right to know what can happen,” Andersson said. The reigning champions successfully defended their title on Sunday.

While Switzerland took the lead twice, Sweden managed to equalize both times, leading to a 2-2 draw in regular time. Following 20 minutes of overtime, the game went to penalties, where Anders Nilsson, Filip Forsberg and Oliver Ekman-Larsson helped Sweden to victory.

The Swedish team was undefeated in the tournament.

Radio Sweden spoke to Markus Korpinen, a hockey consultant at the Swedish Hockey Association, who works developing the next generation of leaders and players, about what the victory means for Swedish hockey.

A glimpse into the lives and rituals of centenarian women, whose beauty is rarely acknowledged

Source: ‘We are who we are’: what these 100-year-old women teach us about beauty

Source: ‘Jesus never charged a leper a co-pay’: the rise of the religious left | US news | The Guardian 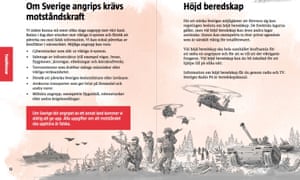 The Swedish government has begun sending all 4.8m of the country’s households a public information leaflet telling the population, for the first time in more than half a century, what to do in the event of a war.

Om krisen eller kriget kommer (If crisis or war comes) explains how people can secure basic needs such as food, water and heat, what warning signals mean, where to find bomb shelters and how to contribute to Sweden’s “total defence”.