What follows is the definition of a political A-hole trying to save his skin by “looking” tough and undermining the democratic process! lllinois Governor Bruce Rauner has conditionally vetoed a gun-control initiative unless the legislature agrees to reinstate capital punishment in the state. Exercising an amendatory veto—a power some governors are granted that permits them to amend legislation in lieu of an outright veto—Rauner called for making the killing of a police officer or any murder in which more than one person was killed a new crime of “death penalty murder.” In a May 14, 2018 news conference at the Illinois State Police forensic laboratory in Chicago, Rauner said “individuals who commit mass murder, individuals who choose to murder a law enforcement officer, they deserve to have their life taken.” He attached his death-penalty plan and several other gun-control amendments to a bill that would have established a 72-hour waiting period for the purchase of assault rifles in Illinois. Legislative leaders and major Illinois newspapers blasted the action as diversionary political gamesmanship by a weakened governor facing a difficult re-election campaign, and said the death-penalty plan had little chance of enactment. Democratic state Rep. Jonathan Carroll, the gun-control bill’s sponsor, said the governor had not consulted him about possible changes and had “hijacked my bill and put politics ahead of policy.” Senate President John Cullerton said: “The death penalty should never be used as a political tool to advance one’s agenda. Doing so is in large part why we had so many problems and overturned convictions. That’s why we had bipartisan support to abolish capital punishment.” Thomas Sullivan, the co-chair of Commission on Capital Punishment in Illinois appointed by Republican Gov. George Ryan, said Rauner’s plan was a “lousy idea.” He called the death penalty expensive and time-consuming, and said, “It doesn’t reduce crime.” The Chicago Tribune editorial board characterized Rauner’s amendatory veto as “cynical” and a “death penalty ploy” that the paper said was intended “to re-establish [Rauner’s] bona fides with disgruntled conservative Republicans.” A Chicago Sun-Times editorial said the governor knew he was “load[ing] up the bill with so many major new provisions that there is no way” the state legislature would approve it, enabling Rauner to claim he “didn’t technically kill the cooling off period … without strictly telling a lie.” In 2000, after a series of death-row exonerations, Ryan declared a moratorium on executions in Illinois and appointed the commission, and in 2003 commuted the sentences of everyone on the state’s death row. Democratic Gov. Pat Quinn signed a bill to abolish the state’s death penalty in 2011. The Tribune editorial said: “The death penalty issue in Illinois was examined and debated for years in light of notorious incidents of wrongly convicted defendants sent to death row. In Illinois, the legitimate sentiment of many that certain heinous criminals should be put to death was weighed against the risk of errors, and the decision was made to end capital punishment. … [N]othing has changed to make Rauner’s [May 14] announcement worthy of consideration.”

Rauner’s plan would mandate the death penalty upon conviction of “death penalty murder.” A conviction would require proof “beyond all doubt” and appeals courts would conduct an independent review of the evidence without deferring to the jury’s judgment. Although the jury would be told a death sentence would be imposed upon conviction, there would be a separate hearing before a judge in which the defendant would present mitigating circumstances in an attempt to spare his or her life. Mandatory death sentences and falsely instructing juries about the law both violate the constitution, and the judicial factfinding provision may violate a capital defendant’s right to a jury trial.

Opposition protesters in Turkey were reportedly deceived into downloading a spy app made by a German firm. Germany has previously vowed to block exports of spy software to authoritarian countries.

The release of the report comes after a memorial to remember Ustasha militia killed by Communist forces at the end of World War II. The annual memorial has become a meet-up for supporters of the Nazis’ Croatian allies.

Go along with US sanctions, and you’ll face jail — that’s the warning Russian lawmakers have for those who adhere to or facilitate business sanctions. Foreign companies have much to lose in this catch-22 situation.

North Korea says it had no choice but to suspend high-level talks with South Korea and is also threatening to pull out of a summit with Donald Trump due to ongoing military exercises between the US and South Korea.

Enjoy watching Fox! Not The racial and gender discrimination lawsuits, involving 18 current and former employees, came after a reckoning that began in 2016. 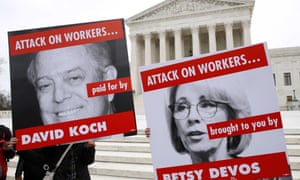 Rightwing activists are launching a nationwide drive to persuade public-sector trade union members to tear up their membership cards and stop paying dues, posing a direct threat to the progressive movement in America.

Documents obtained by the Guardian reveal that a network of radical conservative thinktanks spanning all 50 states is planning direct marketing campaigns targeted personally at union members to encourage them to quit. The secret push, the group hopes, could cost unions up to a fifth of their 7 million members, lead to the loss of millions of dollars in income and undermine a cornerstone of US progressive politics.

Why did May even invite a dictator to Britain? 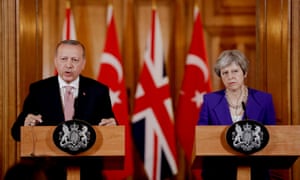 Turkey’s president, Recep Tayyip Erdoğan, has ended his three-day state visit to the UK by insisting that all the journalists locked in Turkish jails were terrorist criminals, ignoring a warning from Theresa May not to lose sight of democratic values as he sought to defend his country from “the extraordinary pressures of a failed coup and Kurdish terrorism”.

At a press conference in Downing Street alongside May, Erdoğan made no reference to May’s remarks about human rights, but instead urged her to do more to extradite Turkish exiles from the Gulenist or Kurdish movements, saying that if she did not act act against terrorists, it would come back to bite her. 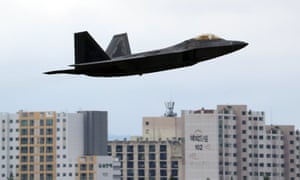 The North Korean regime has called off high-level talks with Seoul and hinted it could also pull out of a planned summit with Donald Trump, in protest at joint exercises by the US and South Korean militaries.

Related: Sign up for the Guardian’s US daily email