The Federal Government wants to give police the power to carry out identity checks without cause at the nation’s airports, with Prime Minister Malcolm Turnbull citing the “dangerous times” facing the nation as justification. 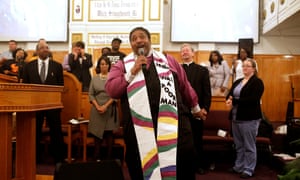 Hundreds of low-wage workers, faith leaders, civil rights organizers and liberal activists were arrested in demonstrations in Washington and outside statehouses across the US on Monday as they resumed the work Martin Luther King left unfinished.

With double the usual police presence, the anti-Arab slogans usually heard during Jerusalem Day were quickly silenced. But the racism wasn’t so swiftly scrubbed out.

By Oren Ziv and Orly Noy

Israeli nationalists march through the Muslim Quarter of Jerusalem’s Old City during the ‘March of the Flags,’ part of the annual Jerusalem Day celebrations, May 13, 2018. (Oren Ziv/Activestills.org)

A day before Israel was set to celebrate the U.S. Embassy’s move to Jerusalem, the annual “March of the Flags,” in which thousands of nationalist Israelis pass through the Old City waving flags and chanting racist slogans against Arabs, threatened to paint Jerusalem as violent and conflict-ridden. This is likely the reason the police made sure that this year, the march would be relatively quiet, without major clashes. In fact, the racism was quickly silenced, and the number of police officers was double the usual size.

And yet, racism was present in every street corner. In the frightened looks of Palestinians, in the closed-up shops, in ensuring that Palestinians were removed from the route of the march.

When the first groups of marchers headed into the Muslim Quarter of the Old City through Damascus Gate, they sang “Am Israel Chai” (“The nation of Israel lives”). When a group of teenagers began chanting racist slogans, the police immediately put an end to it.

At this point, nearly all the stores along the route of the march were closed. Palestinian residents of the Old City hurried home, some of them still holding the flowers handed out as a gesture by left-wing activists. Not all the residents were happy with the flowers; the owner of a nearby juice stand flat-out rejected the gesture. “I want peace,” the activist told him. “You want peace?” he responded, “then first tell your government to leave Al-Aqsa alone.”

Khaled Tufah, the owner of a souvenir shop on Al-Wad Street, where the march was set to take place, explained why he was closing up. “No one buys from us during the march, and even if someone does come, his friends will say: ‘He’s Arab, don’t buy from him.’”

“I don’t care about Trump or anyone else,” Tufah continues. “A few months ago the Palestinian people showed its strength in the face of the metal detectors at Al-Aqsa, and in the end we removed them. The embassy is an issue for politicians, our power is in the streets.”

A Palestinian woman argues with an Israeli Border Police officer during Jerusalem Day celebrations near the Old City, May 13, 2018. (Oren Ziv/Activestills.org)

Muhammad Omar, a young Palestinian Jerusalemite, added: “Jerusalem is holy to all religions. Trump’s decision means he recognizes only the Jews, and unfortunately this move will bring about more violence and death.”

Despite the fact that the main event of the day was a march through the Muslim Quarter, thousands celebrated in white shirts and and Israeli flags across the city. Army Radio broadcasted live from the city center, and religious girls who did not take part in the March of the Flags through the Muslim Quarter filled the streets and danced to the sounds of live music set up by the municipality.

A man draped in an American flag stands in front of Damascus Gate during the annual ‘March of the Flags,’ as part of Jerusalem Day, May 13, 2018. (Oren Ziv/Activestills.org)

Among the Israeli flags were flags belonging to Lehava, the right-wing anti-miscegenation group, mostly by younger marchers, many of whom wore “Kahane was right” stickers on their shirts. There was also a group of young Ethiopians who came to the march to raise awareness for Avera Mengistu, an Ethiopian-Israeli who crossed over into Gaza in 2014 and has been unheard of since. Earlier, they visited the protest tent set up by Mengistu’s family, across from the prime minister’s residence.

A group of left-wing activists from “Antifa Jerusalem” hung a giant sign on the route to Damascus Gate, reading “Jerusalem against nationalism,” leading to the detention of six activists.

It turns out that talking about nationalism during the city’s so-called holiday is too much for the public to handle. Lehava’s flags and stands, however, remained standing.

This article was first published in Hebrew by Local Call. Read it here.

The High Court has refrained from ruling on an urgent petition about whether it is legal for the army to shoot unarmed, civilian protesters who pose no threat to human life. They have the blood of 68 people on their hands.

A medic carries a Palestinian child during a protest in the Gaza Strip, as part of the Great March of Return, May 14, 2018. (Mohammed Zaanoun/Activestills.org)

The Israeli army has shot and killed 68 unarmed Palestinian protesters in Gaza while the Israeli High Court deliberates whether or not it is legal to shoot unarmed civilian protesters who pose no threat to human life. That number has likely gone up in the time since this article was published.

When a handful of human rights groups filed an urgent petition to the High Court on April 15, demanding that it strike down the army’s open-fire regulations that authorize shooting unarmed civilians just because of their proximity to the Gaza border fence, army snipers had already gunned down 33 unarmed protesters in the Great Return March, including three minors.

While the three Supreme Court justices deliberated, another 68 people have died. The rights groups asked for an urgent decision, hoping to stop the bloodshed.

The justices did not heed their request. No decision has been handed down. The shooting continues. Sixty-eight more people lost their lives.

If, after waiting until the shooting stops, the court ultimately decides that it is not permissible to shoot unarmed, civilian protesters just because of where they are standing, or because they are attempting to cross or even damage a fence, the blood of 68 people will be on their hands.

If the justices decide that it is, indeed, permissible to shoot unarmed civilians just because they might cross a fence, well, then they will have the blood of those 68 people and countless others on their hands.

It’s bad enough that this massacre is state sanctioned. By declining to rule in a timely fashion, however, this predictable massacre has also been sanctioned by the judiciary.

Israel’s Supreme Court is currently in a fight for its life. The legislature and government are threatening to strip the court of its power to overturn unconstitutional laws and policies. If, out of fear of further angering their detractors in Knesset, the justices did not use that power in this case then they don’t deserve to have it in the first place.

Since March 30, when the Gaza protests began, 101 Palestinians have been killed and well over 10,000 wounded, many maimed for life. Not a single Israeli injury and not a single rocket fired at Israel, even as Israel has bombed Gaza several times in recent weeks. It doesn’t matter which numbers you want to believe or how many stones have been thrown (not a single injury caused by them), or even how many Hamas officials have called on Palestinians to protest. This is a massacre of a stateless population living under military siege. And we are all accomplices for not doing more to stop it.

Source: We are all accomplices to Israel’s massacre in Gaza | +972 Magazine

Robert Jeffress, a Dallas evangelical pastor, played a prominent role in the ceremony, as did the Rev. John C. Hagee, a televangelist with a history of inflammatory remarks.

Leave it in the fish – dummy! 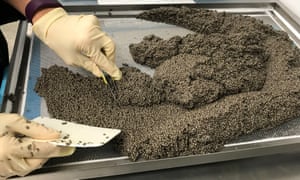 Can homegrown caviar from North Carolina stand up to the cheaper Chinese product? A local farm tries to get Americans to bite

The chamber inside LaPaz Farm is so clean it almost feels like an operating room. Before we walked into the room, Sabine Mader, the manager of the farm, asks us to put on white coats, gloves and hair nets – and a beard net for my husband. Inside the chamber, a fish-cutter is waiting with a freshly dispatched, female Russian sturgeon on the table, one of five to be harvested today.

He deftly slices open the fish and pulls back the meat, revealing a wave of grey-black roe in the ovaries. It is the culinary equivalent of an old-fashioned coin purse slit down the middle with a treasure hidden inside. The treasure, in this case, is osetra caviar.

So Patreon joins those enabling fascists? 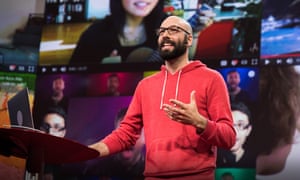 In five years, online membership service Patreon has attracted two million patrons supporting 100,000 ‘creators’ to the tune of $350m – including nearly $1m a year for rightwing psychologist Jordan Peterson. So what’s the secret of its success?

The internet has transformed creative industries. Words, music, video, images and games can be distributed worldwide, instantly and for free, delivering a cornucopia of delights to your screens and mine. The problem is that, historically, it’s not been quite so good at ensuring those same creative industries get paid. Ad-supported media did the job quite well, until a couple of years ago, when it suddenly didn’t. Streaming services seem to be making a lot of money for someone, but that someone is rarely the creators who exist on those platforms.

All of which goes some way to explaining the surprise (and jealousy?) that accompanied the news that Jordan B Peterson, the alt-right’s favourite psychologist and dispenser of such advice as “stand up straight”, is making just under $1m a year online, thanks to the support of some 9,500 fans on the membership service Patreon.

This is the pot complaining about the kettle. 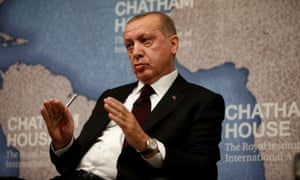 US has chosen to be part of problem not solution, says Recep Tayyip Erdoğan in London speech

The Turkish president, Recep Tayyip Erdoğan, has said the world is living in dark times reminiscent of the years leading up to the second world war as he lambasted decisions by Donald Trump to pull out of the Iran nuclear deal and recognise Jerusalem as the Israeli capital.

Donald Trump’s victory in US election in November 2016 put the fate of the deal in doubt. He had promised prior to his election to “dismantle the disastrous deal with Iran”, although many believed he might instead adopt a more rigorous implementation of the agreement and tighten sanctions already in place. This could force Tehran to violate first or make the deal redundant.