Reneging on the nuclear deal signals that he doesn’t care about American allies.

Samir Awad was unarmed when he was shot in the back eight times by soldiers. During his killers’ trial, the judge and defense treated the dead boy as if he was the one being charged with a crime.

Samir Awad is evacuated for medical treatment after being shot in the back of the neck by Israeli soldiers, January 13, 2013. (Nader Morar/B’Tselem).

In Israeli courts, the rare trial of a soldier who killed a Palestinian invariably becomes a trial of the Palestinian they killed. Tuesday morning in the Ramle Magistrate’s Court, where two former Israeli soldiers are on trial for killing 16-year-old Samir Awad, was no exception.

Samir was not mentioned once by name during the nearly four-hour cross-examination of one of the two soldiers on trial. The judge and defense lawyers reflexively referred to Samir as “the suspect” — as if the dead boy was being charged with a crime instead of the soldiers who shot him.

“It is as if nobody died,” remarked one of the Israeli activists who had come to support Ahmad, Samir’s father.

Samir Awad was shot in the back eight times by soldiers who had been lying in ambush near a hole in Israel’s separation barrier. Samir was not armed. He did not pose a threat to anyone. He was running away at the time he was shot.

For shooting and killing Samir, A. and B., the two former soldiers whose names are under gag order, are charged with “reckless and negligent use of a firearm.”

When Ahmad Awad, Samir’s father, finally reached Room 207 in the Ramle Magistrate’s Court Tuesday morning, he was not allowed to enter. He had woken up early that morning to make it from the West Bank village of Budrus, through a checkpoint that he needed a special military permit to cross. From there, an Israeli activist picked him up and drove him to the courthouse, a drab, tan building on a street named after Israel’s first president.

Ahmad has been making this trip since 2015, when Israeli authorities — after a more than two-year delay — indicted the two soldiers who shot and killed 16-year-old Samir in January 2013.

Teeth gritted and arms folded across his chest, Ahmad toed at the waxed-tile floor and waited outside the courtroom where his sons’ killers sat. Inside, the presiding judge, Rivka Glatz, held a short, closed-door mediation session between the prosecution, the soldiers who shot Samir, and their lawyers. Ahmad asked to be present for the mediation but was told to leave since he is not technically a party to the case.

“The case has been badly damaged,” the prosecutor told Ahmad when he emerged from the closed-door session. The defense, he explained, thinks they have a chance of getting off completely — and they might be right.

The defense is arguing that prosecuting the two soldiers for illegally killing Samir would constitute “selective enforcement” of the law. To prove their point, they are demanding that the state reveal statistical data regarding criminal investigations and prosecutions of other soldiers who have killed Palestinians, as well as the case materials themselves.

Israeli authorities do not want to provide those files, on which the outcome of the case might depend.

An Israeli solider shoots tear gas toward Palestinian demonstrators during a protest against the occupation in the West Bank village of Budrus, three days after soldiers shot and killed 16-year-old Samir Awad, January 18, 2013. (Oren Ziv/Activestills.org)

The distance between the courtroom and the often incomprehensible reality of the occupation felt immense on Tuesday morning. The judge seemed to struggle to grasp the technical details of the soldier’s testimony and the prosecutor’s questions about the precise angle of B.’s gun when he opened fire on Samir; the respective positions of B. and Samir relative to the various parts of the separation barrier; and the complex nature of the separation barrier.

Throughout the testimony of B., a tall, soft-spoken twenty-something with dark brown hair pulled back into a short ponytail, a casual observer never would have guessed that the “reckless and negligent use of a firearm” for which he was being tried had actually resulted in eight bullets in 16-year-old Samir’s body, one of which pierced the nape of his neck.

Part of the absurdity of Tuesday’s hearing stemmed from the fact that the case, of two active duty soldiers committing a crime during a military operation, is being heard in a civilian court. It took Israeli authorities more than two years to indict the soldiers who shot Samir — only after Ahmad, with the help of Israeli human rights group B’Tselem, sued to force the Military Advocate General to either file an indictment or close the investigation. By the time authorities finally reached a decision to prosecute, A. and B. were no longer under the jurisdiction of the military justice system. They are being tried as civilians by civilian prosecutors in a civilian court not designed to adjudicate military matters.

When the hearing was finally over, Ahmad went to the court’s administrative office to receive documents that will enable him to get a travel permit from the army so he can cross through the checkpoint for the next hearing, tentatively scheduled for May 15, Nakba Day. That is, if the prosecution decides to hand over all of the data and case files of other Israeli soldiers who were investigated and prosecuted for killing Palestinians.

If they don’t hand over the files, there is a chance that the final time Ahmad makes the journey from Burdus to Ramle will be to watch his son’s killers walk free.

The Senate must hold the C.I.A. nominee accountable for the harsh treatment of detainees under her watch and for destroying evidence of torture. 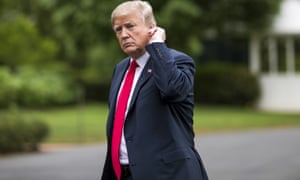 “Candace Owens of Turning Point USA is having a big impact on politics in our Country,” the president said. “It is wonderful to watch and hear the dialogue going on … so good for our Country!”

You can have the best vine yards in Palestine… the grapes that are considered the pride of the area , settlement wineries are competitively confiscating and stealing to sell ‘holy’ wine … you look around and attempt to take a breath with the breeze of nature with the smell of vine leaves and drying almonds awaiting a new phase of its season … you look deeper and you start noticing caravans , houses that are quite shubby stacked on hills watching the land . A huge settlement surrounds the area. Outposts are another invented threat . The Palestinian farmer thought he won the case . He succeeded in getting an order from the court to remove those caravans from his land…

The officials start a commitment to the assumed demolition !!! They decide to open a road. … another road to bring the bulldozers into conduct the demolition . Lands are confiscated for the assumed removed illegal outposts on the illegal settlement on the Palestinian farmers land move to … the road is a highway project for a more expansion of the growing settlement… all under the name of fulfilling law…. law of occupation that systematically cleanse people and land 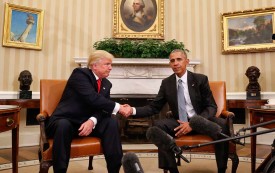 The post A Proper Rebuke of Donald Trump from an Actual President appeared first on The Nation.