In an April 27 editorial, the Los Angeles Times said the death penalty should come to an end and the recent exoneration of California death-row prisoner Vicente Benavides Figueroa illustrates why. Benavides — an intellectually disabled Mexican national who was working as a seasonal farm worker — spent more than 25 years on death row after being wrongfully convicted and sentenced to death on charges of raping, sodomizing, and murdering his girlfriend’s 21-month-old daughter. His conviction rested on extensive false forensic testimony provided by prosecution medical witnesses who had been given incomplete hospital records and who erroneously testified that the child had been sexually assaulted. One California Supreme Court justice described that testimony as “among the most hair-raising false evidence that I’ve encountered in all the time that I’ve been looking at criminal cases.” The Times called Benavides’s conviction “an egregious miscarriage of justice” and said “[h]is exoneration serves as a reminder of what ought to be abundantly clear by now: that despite jury trials, appellate reconsideration and years of motions and counter-motions, the justice system is not infallible, and it is possible (or perhaps inevitable) that innocent people will end up facing execution at the hands of the state.” Benavides’s case was prosecuted in Kern County during the administration of long-time District Attorney Ed Jagels. Elected multiple times to head the California District Attorneys Association, Jagels successfully pushed to remove three justices from the California Supreme Court whom he claimed were anti-death-penalty. His official Web page as district attorney touted that Kern had the highest per-capita imprisonment rate of any county in state, and as of January 1, 2013, the county had more people on its death row than were sentenced to death in more than 99% of U.S. counties. The county also has the highest per capita exoneration rate in the state. Benavides is reportedly the 26th innocent person wrongly convicted by Kern County prosecutors, most of whom were wrongly convicted as a result of official misconduct. As of March 2015, 22 of the 24 Kern County exonerations listed in the National Registry of Exonerations had involved official misconduct by police, prosecutors, or other government officials. Benavides’s exoneration, the Times said, is also a reminder “of the dangers inherent in California’s efforts to speed up the calendar for death penalty appeals under Proposition 66 …. Moving more quickly to execute convicted death row inmates increases the likelihood that due process will be given short shrift and the innocent will be put to death.” The records that showed 21-month-old Consuelo Verdugo had not been sexually assaulted — and that cast doubt on whether she had been murdered at all — were not discovered until 7 years after trial. The one year that Proposition 66 gives appellate lawyers to investigate cases and file appeals makes it less likely that they will discover such evidence “and thus more likely that innocent people will be put to death.” Washington Post columnist Radley Balko put it more starkly: “if Prop 66 had been in place when Mr. Benavides was convicted, he’d almost certainly be dead. He’d never have lived to see his exoneration.” Balko notes that “[t]his problem isn’t just limited to California. Even as we learn more about the extent of wrongful convictions, prosecutor misconduct and misuse of forensic evidence, states such as Texas, Alabama and Florida have also moved toward limiting appeals and speeding up executions.” He says “[i]t’s almost as if some lawmakers and law enforcement officials think that the problem with wrongful convictions isn’t that there are too many of them, but that they’re bad PR for the law-and-order cause. And that the best way to make them go away isn’t to fix the problems that allowed them to happen, but to execute people before we ever get the chance to learn that they’re innocent.” But the problems, the Times editors said, may be beyond repair. “The unfixable problem with the death penalty is that mistakes get made, witnesses lie, confessions get coerced — all factors that can lead to false convictions. It is abjectly immoral to speed things up by limiting due process. The better solution,” the editors conclude, “is to get rid of the death penalty altogether.”

(Editorial, The latest California death row exoneration shows why we need to end the death penalty, Los Angeles Times, April 27, 2018; Radley Balko, The Watch: As California moves to speed up executions, a man is exonerated after 25 years on death row, The Washington Post, April 30, 2018; CA: Prosecutor’s Fabrication is Tip of the Iceberg When It Comes to Government Misconduct in Kern County, The Open File, March 9, 2015.) See Editorials and Innocence.

“Dr Harold Bornstein has admitted that the president dictated his own health report. But he’s just one case of collateral damage in Trump’s war on truth” 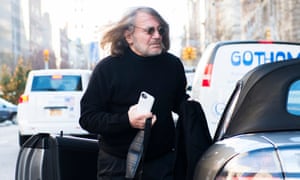 Dr Harold Bornstein has admitted that the president dictated his own health report. But he’s just one case of collateral damage in Trump’s war on truth

Two years ago, give or take, the US election seemed to hang on the health of the candidates. A video surfaced of Hillary Clinton, seeming to wobble and almost faint as she got into a car. Your head said: this is trivial thing, if it were serious she would have bowed out, it’s probably one of those diseases like labyrinthitis or flu that you don’t believe exists until you get it yourself. Your gut said: this is very bad, voting is primal; no one lines up behind anyone who looks as though they’re about to fall over.

Trump, meanwhile, was in rude health, which was plain from his overall rudeness, and also, a letter from his physician, Dr Harold Bornstein. It was like a note you forge from your mum, in reverse: Donald Trump can go swimming, because he is in the best health ever, his level of wellbeing is unlike any you may have encountered in a swim-eligible child. It turns out there was a reason. “He dictated the whole thing,” Borstein told CNN on Tuesday. “I just made it up as I went along,” he unclarified, but I think we can call this an idiomatic US/UK difference: over there, the phrase clearly means: “I wrote down what that other person was saying.”

Self-delusion is inexhaustible, it seems 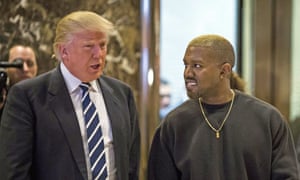 His suggestion that black people have been complicit in their own slavery has prompted widespread outrage. What lies behind Kanye West’s recent provocations?

In a video viewed more than 6m times on Twitter, 21-year-old Chika Oranika summed up the current feelings of many black Americans about Kanye West. She delivered her own lyrics over the beat of the rap star’s Jesus Walks. “How you say you Yeezus but do nothing to restore us? You support the people up in power that abort us,” she raps into the camera. “It don’t matter how much money you got or you lack, when that cheque clear don’t forget that your children are still black.”

Why the opprobrium, which has come from activists, Hollywood stars and fellow musicians, as well as withering online freestyles? West, one of the most significant, complex and celebrated rappers in the US, has used a 350-tweet stream of consciousness over the past fornight to throw his support firmly behind Donald Trump. But yesterday, he went way beyond party politics in an interview with TMZ, saying, in a sloppy bit of rhetoric: “You hear about slavery for 400 years. For 400 years? That sounds like a choice.” 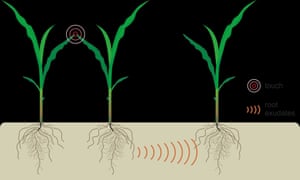 Scientists studying corn seedlings believe that they send signals under the soil, advising each other of the proximity of other plants

Plants use their roots to “listen in” on their neighbours, according to research that adds to evidence that plants have their own unique forms of communication.

The study found that plants in a crowded environment secrete chemicals into the soil that prompt their neighbours to grow more aggressively, presumably to avoid being left in the shade.

Women in the US Forest Service love what they do. But they also describe a toxic male environment that tolerates, and even promotes, their harassers

Source: Management and control of communicable diseases in schools and other child care settings: systematic review on the incubation period and period of infectiousness | BMC Infectious Diseases | Full Text

Oops! RIP and no thanks to industrialized agriculture and govidiots who believe less government/regulation of food, air, water, earth will be good for us.

The first outbreak-related death occurred in California, and cases have now reached 121.

You’ve probably heard of the wisdom of crowds. The general idea, popularized by James Surowiecki’s book, is that a large group of non-experts can solve problems collectively better than a single expert. As you can imagine, there are a lot of subtleties and complexities to this idea. Nicky Case helps you understand with a game.

Draw networks, run simulations, and learn in the process. The game takes about a half an hour, so set aside some time to play it through.

(Own report) – Berlin is forging ahead with the German-French military cooperation by intensifying collaboration in air transport. In addition to ambitious armament projects, the defense ministries of Germany and France have reached an agreement last week regulating the operation of a joint air transport squadron based in Évreux (France) as well as the training of the necessary personnel. The squadron will be available to both countries’ tactical air transport and supplement the large A400 transport aircraft, which will also be procured jointly by the German and French armed forces. Experts view the current cooperation – for example in the framework of the Franco-German Brigade – to be insufficient, because, so far, diverging strategic goals complicate its deployment. For his “vision of a new Europe,” Emmanuel Macron, under whose presidency the cooperation is to be expanded and improved, will be awarded Aachen’s International Charlemagne Prize next week.