An election move about a 2003 issue that is nada now! 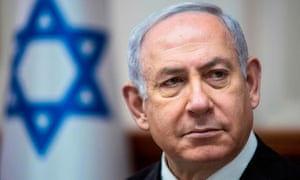 Benjamin Netanyahu has accused Iran of continuing to hide and expand its nuclear weapons knowhow after a 2015 agreement with global powers, presenting what the Israeli prime minister claimed was “new and conclusive proof” of violations.

Related: ‘It will not be very pleasant,’ Iran warns, if Trump sabotages nuclear deal