A report has attributed a rise in hate crimes against Muslims in the US partly to the policies and rhetoric of US President Donald Trump. The 2017 rise is lower than the 44 percent spike the previous year, but worrisome.

GOP blocked nearly all of President Obama’s judicial appointments and many of his administrative appointments – why the F3ck are any Democrats not blocking Trump?!! Minutes before a committee vote, Senator Rand Paul, Republican of Kentucky, bowed to pressure and backed the confirmation of Mike Pompeo to be secretary of state. 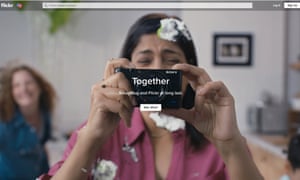 One of the first and best-known photo-sharing services, Flickr, has been bought by the independent image-hosting firm SmugMug, as Verizon begins the breakup of Yahoo.

The deal, terms of which have not been disclosed, sees Flickr – with its tens of billions of photos and 75 million users – become part of a similar family-run service in SmugMug.

It looked like a sexual assault in a public restaurant. Slave patrols pulling a black woman’s clothes off in public and dragging her to the ground over plastic wear & patrons kept eating like it was nothing. Cop also threatened to break black woman’s arm. Perverted slave patrol mofos!  Dylann Roof killed 9 Black people at a church & cops took him to get food at Burger King. I despise them with everything in me!

Two police officers in Alabama wrestled a woman to the ground in a Waffle House on Sunday morning, exposing her breasts during the struggle and prompting comparisons to two black men arrested in a Philadelphia Starbucks earlier this month.

The incident sparked a sit-in protest at the store Sunday afternoon, and prompted responses from the NAACP and celebrities.

A video that has gone viral shows Chikesia Clemons, 25, sitting on a chair at the diner in Saraland, north of Mobile, as one of the officers grabs her neck and right wrist in an attempt to subdue her. Clemons describes a disagreement with a store employee that triggered the police response. She soon appears conscious of her tube top, and raises her arms to cover her bust line.

“You’re not going to grab on me like that, no,” Clemons tells the officer, who appears to speak to another officer off-camera in the video filmed by Clemons’s friend, Canita Adams.

What happens next is unclear. AL.com published an edited version of Adams’s video that jumps to the moment Clemons and the two officers go to the ground in a violent tumble. It is unclear from the video who initiated the struggle that forced Clemons and the officers to the floor.

#BoycottWaffleHouse A Waffle House in Saraland,Alabama called the police on Chikesha Clemons. The dispute was over utensils. Chikesia wanted the corporate office number. Police showed up threatening to break her arm,exposed her breast during the fake arrest. pic.twitter.com/DYK9ymzOIf

“What are you doing?” Clemons asks as the struggle continues on the tile floor.

“I’ll break your arm, that’s what I’m about to do,” an officer says.

The struggle continues, with officers demanding Clemons to stop “resisting” as her breast is exposed.

At one point, an officer places his hand around her neck.

“You’re choking me!” Clemons cries out.

The officer releases his grip when a third officer nearby gestures with his hand. Clemons was charged with disorderly conduct and resisting arrest, her mother Chiquitta Clemons-Howard told AL.com