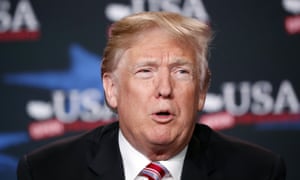 Report finds Trump’s businesses have raked in $15.1m from political groups and federal agencies in ‘pattern of personal self-enrichment’

Donald Trump’s US businesses have raked in $15.1m in revenue from political groups and federal agencies since he began his run for the presidency, according to a report released on Monday.

For the report, titled The Art of the (Self) Deal: Political and Taxpayer Spending at Trump’s Properties, Public Citizen, a Washington-based nonprofit, analyzed all the available records of political and federal taxpayer spending at Trump businesses.