all so sad – killings bring on more killings. From the regime stronghold of Damascus to battle-scarred opposition areas, Syrians sent audio recordings to The Times in which they described what it’s like waiting for an attack by the U.S.-led coalition.

he President, feeling growing pressure from the independent Special Counsel, concocted a plan to put an end to the investigation of his administration.

He thought he could simply fire the Special Counsel and save himself from an inquiry that was leading closer and closer to the Oval Office.

So, on a Saturday, the President pressured the Attorney General to fire the Special Counsel, but the AG refused, and the AG resigned instead.

Then the President pressured the Deputy Attorney General to fire the Special Counsel, and he too refused the order and resigned.

That left the Solicitor General of the United States, the country’s lawyer that argues cases before the Supreme Court, as next in line to lead the Justice Department.

The Solicitor General finally fired the Special Counsel. The President thought he was home free, but that soon proved to be wishful thinking.

The White House faced subpoenas from the Special Counsel, and the President was accused of obstructing justice. Impeachment seemed imminent, but the President maintained his innocence.

Eventually, though, only 13 months after what would later become known as the Saturday Night Massacre, the President resigned from office.

This, of course, is the story of Richard Nixon, the only American President to ever resign the presidency.

If the story sounds familiar, it’s because a very similar case is unfolding in real-time in Washington, D.C., as Donald Trump finds himself in the center of an ongoing investigation by a special counsel.

As Special Counsel Robert Mueller continues his investigation into Trump and his administration over allegations of collusion with Russia, the President has grown increasingly frustrated and has floated the idea that he may fire Mueller. Ironically, it was Trump’s decision to fire FBI Director James Comey that led to Muller’s appointment in the first place.

Trump this week also blasted his Attorney General, Jeff Sessions, and especially Deputy AG Rod Rosenstein, who currently oversees Mueller’s investigation. The White House and Trump’s friends at Fox News have already started their campaigns to undermine Rosenstein and pave the way for his firing. The writing is on the proverbial wall.

The inconvenient truth for Trump, however, is that the search warrants that allowed the FBI to conduct the early morning raids on Monday were approved by Rod Rosenstein and the US Attorney in Manhattan, both men appointed by Trump.

The U.S. Attorney had to convince a federal magistrate (appointed by local judges not a president) that probable cause existed to raid Cohen and seize documents, computers, and even his cellphone from his hand. The Magistrate must have believed that there was enough cause to believe that crimes had been committed, and that Cohen would not have provided the information through a subpoena.

Now Trump is so furious (or worried of what the investigators will find) that he’s again contemplating firing Mueller. That sort of plan didn’t work out well for Nixon, and there’s no reason to believe it will work for Trump, but that may still not deter him from taking action.

Even if he fires Mueller now, or convinces someone at the Justice Department to do it for him, the charges being pursued by the U.S. Attorney in New York won’t go away, and from what’s been reported so far, the allegations don’t seem to be related to the Russia investigation.

It appears that Mueller found evidence of unrelated crimes and forwarded it to the US Attorney. That office in Manhattan is the one that sought the search warrants, and raided Cohen.

Trump’s fear of what the investigators may get from Cohen’s materials, or Cohen himself, must be getting the better of him. He is starting to sound a lot like Nixon’s infamous, “I’m not a crook!”, but he’s not acting like an innocent person.

If Trump is innocent, as he claims nearly everyday, then he should welcome a thorough investigation that would prove his innocence. He currently has an Attorney General, Deputy AG, U.S. Attorney in New York, and a Solicitor General all appointed by him. And don’t forget both the House and Senate are controlled by Republicans, and even Mueller is a life-long registered Republican.

In contrast to Bill Clinton, who faced a Republican-led House and Senate and Republican Special Counsel Kenneth Starr, Trump should be must less worried about being railroaded by a partisan investigation.

In the end, if Trump were to fire Mueller or have him or have fired to end the investigation prematurely, it would fall to Republicans in Congress to decide how to proceed. For now, some Republicans are talking tough about protecting Mueller.

But, given the toothless partisan investigations into the Russian collusion claims conducted by the House and Senate committees, no one believes Republicans would do anything to punish Trump, much less move toward impeachment.

So, another Saturday Night Massacre may be in the making, with new actors playing the parts of their Nixonian predecessors, but this time, the script may end with a president still in office, wounded and bleeding politically, but alive to fight another day.

In any other political drama, this story would spell the certain end of a presidency. In Trump’s world, however, this may just be another bump in the road for the unorthodox presidency of the man some simply call “The Donald.”

Somehow the idea is just getting riper in my head. Can we all join forces in making a real difference?

As next week is marking the 70th year of Occupation and Gaza will be in its 4th week of the Symbolic Return Marches, I would like to call all human rights believers and all those among us who believe in freedom as a destination to all humans… let’s support the cause towards freedom with kite-running-flying friday, where we will fill the sky with kites… a resemblance of hope and peace and a call of freedom for a future… let us fill our skies with kites….. and prove to the governments that kites bring freedom not war-planes, rockets and missiles.

( of course I have no idea how to transform this into a campaign.. please spread your wings and let us run the skies with our kites… and share widely …Maybe…

Seahawks joins anti-Black Lives Matters racists! “As if there were any doubt that the NFL was going to continue its blacklist against Colin Kaepernick, the former Super Bowl starting quarterback was once again denied an opportunity this week. This time, it was in Seattle, and there was none of the hemming and hawing about Kaepernick’s numbers not being good enough or his playstyle not being the right fit for the offense. No, instead, an NFL source told ESPN’s Adam Schefter that Seahawks officials cancelled Kaepernick’s workout after he refused to commit to ending his kneeling protests during the national anthem during the 2018 season.” 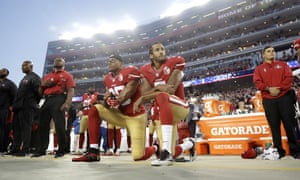 Kaepernick and comrade-in-arms Eric Reid have again been denied employment due to their anthem protest, further proof that for the NFL’s owners it’s simply a matter of power

As if there were any doubt that the NFL was going to continue its blacklist against Colin Kaepernick, the former Super Bowl starting quarterback was once again denied an opportunity this week. This time, it was in Seattle, and there was none of the hemming and hawing about Kaepernick’s numbers not being good enough or his playstyle not being the right fit for the offense. No, instead, an NFL source told ESPN’s Adam Schefter that Seahawks officials cancelled Kaepernick’s workout after he refused to commit to ending his kneeling protests during the national anthem during the 2018 season. 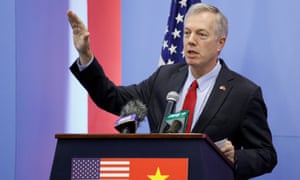 Ted Osius says administration asked him to press Vietnam to accept the deportees, who had mostly fled to America after 1975

The former US ambassador to Vietnam has said he resigned last year in opposition to a Trump administration plan to deport more than 8,000 Vietnamese people, most of whom are refugees.

Ted Osius, who worked in the US foreign services for 30 years, said the Trump administration asked him to press Vietnam’s government to accept the deportees – who had mostly fled the country after the fall of Saigon in 1975.