Religious-based racism is the worst! 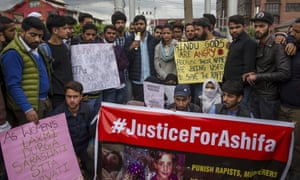 When police in northern India went to court to lodge a charge sheet on Monday, they were confronted by dozens of lawyers determined to keep them out.

The lawyers were Hindus. The charges, which police managed to lodge only after calling backup, implicated eight men in the rape and murder of a Muslim child.

The evidence from Finland – as well as numerous other pilot schemes across the world – shows the opposite is true. When people are given homes, homelessness is radically reduced, engagement in support services goes up and recovery rates from addiction are comparable to a “treatment first” approach. Even more impressive is that there are overall savings for government, as people’s use of emergency health services and the criminal justice system is lessened. 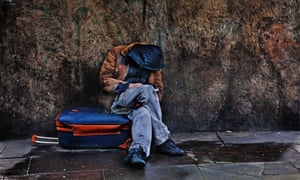 The number of rough sleepers in Britain is soaring, with deaths now a weekly occurrence. It’s time we got over our prejudices

“I was born in Liverpool and grew up on a council estate. I had a clean home, toys and nice meals as a kid. When I was nine years old, the sexual abuse started. My abusers made me feel special. They gave me gifts, moneys, cigarettes and sweets. When I was 13 I ran away from home and soon found myself in the murky world of prostitution on the streets. My life was out of control.”

Related: Homelessness is now the public face of this Tory era | Polly Toynbee 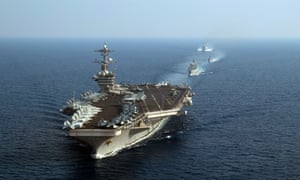 Despite Donald Trump’s tweet suggesting that a US strike on Syria was imminent – and warning Russia to “get ready” – the US naval and other forces in the region suggest his rhetoric may have outpaced military readiness for anything but the most limited action.

Trump’s tweet – which he appeared to row back on on Thursday – appears to have given Syrian forces ample warning to move key assets, suggesting that any strike now would be largely symbolic and have little meaningful impact on the conduct of the war in Syria.

Sweden has opened the world’s first electrified road. The 1.2-mile route, between Stockholm Arlanda airport and a logistics site, will now actively charge cars and lorries as they travel along it using an innovative energy transfer system 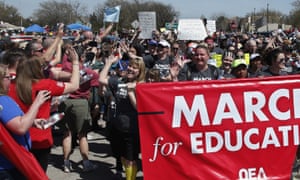 A nationwide network of rightwing thinktanks is launching a PR counteroffensive against the teachers’ strikes that are sweeping the country, circulating a “messaging guide” for anti-union activists that portrays the walkouts as harmful to low-income parents and their children.

The new rightwing strategy to discredit the strikes that have erupted in protest against cuts in education funding and poor teacher pay is contained in a three-page document obtained by the Guardian. Titled “How to talk about teacher strikes”, it provides a “dos and don’ts” manual for how to smear the strikers.

Silent Tongues is one of the most wonderful live solo piano recordings ever. I once dragged a brilliant biochemistry friend (who had zero training in music) into the music library and sat him down in front of a turntable – yes, we had turntables in the school library back in my days when Harrison was president). I said, “listen to this passage here…this is Louisiana boogie-woogie right here. And this passage here, there’s Bach, which is the skeleton of Bebop. This passage here….listen to the sweaty grind, it’s the furious groove of chain gang blues. There’s concurrent streams of classical, blues, and jazz history intertwined throughout.”

And just to see his face develop from furrowed confusion into a glowing bulb of recognition made it one of the most memorable achievements in my life. 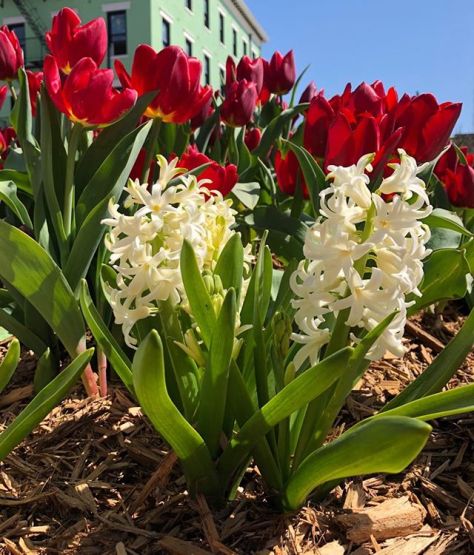 This came across my Twitter Feed, and I got so mad reading it, I had to share.

The former doctor spit out an offensive talking point that comes straight from Fox News.

Ben Carson is doing his best to make people forget he is unqualified to be the secretary of the Department of Housing and Urban Development (HUD). From the beginning, his mission appears to be to prevent low-income people from obtaining fair housing. For example, Carson has blocked an Obama-era Small Area Fair Market Rent rule, which would give low-income people better access to schools and jobs, a mandate that was supposed to go into effect on January 1st. He also wants to kick people out of HUD if they don’t work a requirement of 32 hours per week. Regardless of if there are little-to-no jobs in an area, if the jobs are paying a starvation wage or if the job is only 20 hours a week. Of course, he famously said people are “too comfortable” in poverty. Carson appears too comfortable at HUD with a $31,000 office dining room set, his family’s allegedly too involved in HUD and employees filing lawsuits against him.

That said, in a clear effort to clean up his heartless image, on Tuesday Carson visited Winridge Elementary in Memphis, Tennessee. He met with a woman named Shakila Boyd who was once homeless with her child and was saved because of HUD programs (more than likely, the HUD programs under the Obama administration). According to Fox 13 in Memphis, she said, “I’m going back to school now and everything,” Boyd said through tears while holding her daughter, K’Yanna. “I have a house. They helped me get a job and I’m doing better now.”

Carson’s response to Shakila’s story? He believes the way to stop poverty is for more peopleto get married. “Number one: finish high school. Number two: get married. Number three: wait until you get married to have children,” Carson said. “Just those three things, and you’re two percent less likely to live in poverty.” Obviously, getting your education and waiting to have children until you are ready to have children will reduce poverty. But the deeply misinformed Ben Carson is completely wrong about marriage reducing poverty. Countless studies have proven you cannot marry yourself out of poverty. This is a recycled talking point from the conservative right that Carson has the nerve to spit out in front of a woman who poured her heart out. As Kristi Williams of the Ohio State University told The New York Times in 2015, “It isn’t that having a lasting and successful marriage is a cure for living in poverty. Living in poverty is a barrier to having a lasting and successful marriage.”

I’ve told you numerous times why I can’t stand Carson. Man grew up getting every Government program that there was, back when it actually meant something. If he grew up in these times, nobody would overlook his ‘ youthful indiscretions’. He’d have been solidly in the school-to-prison pipeline.

Then, he takes a job that he’s completely unqualified for and proceeds to try and grift – him and his entire family. He absolutely disgusts me, and is turning away from the FAIR HOUSING goal that is the core of HUD’s mission. I can’t wait for when he’s measured for his orange jumpsuit.

This is just great.

WATCH: During her confirmation hearing this morning (yes, this morning – in 2018), judicial nominee Wendy Vitter refused to say whether she agreed with the result in Brown v. Board of Education. #UnfitToJudge pic.twitter.com/RWroh0XUIC

I assume overturning Brown will be on the Republican platform by 2024.