folks – this type of talking head is hard to believe even existed but… this can even happen? sad beyond words 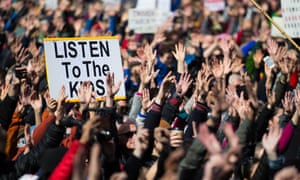 Jamie Allman, who said he would use a ‘hot poker’ to attack David Hogg, is also taken off radio after advertisers exit shows

A conservative commentator who sent a tweet saying he would use “a hot poker” to sexually assault an outspoken 17-year-old survivor of the Florida high school shooting has resigned from a St Louis TV station and been taken off the radio after several advertisers withdrew from his shows.

KDNL-TV accepted Jamie Allman’s resignation and canceled The Allman Report, according to a brief statement from the Sinclair Broadcast Group, which operates the TV station. Before the show’s launch in January 2015, KDNL-TV touted it as a nontraditional newscast with a conservative spin.