Vladimir Putin is eager to leave his post after his next term, the Kremlin critic and onetime Russian oligarch Mikhail Khodorkovsky says. He urges Russian voters to send a “message” in Sunday’s election.

The tumult in Slovakia has now distinguished the country from others in the region, where disillusioned voters have sided with illiberal populists.

This attack on my credibility is one part of a larger effort not just to slander me personally, but to taint the FBI, law enforcement, and intelligence professionals more generally. It is part of this Administration’s ongoing war on the FBI and the efforts of the Special Counsel investigation, which continue to this day. Their persistence in this campaign only highlights the importance of the Special Counsel’s work.

Attorney General Jeff Sessions fired former FBI deputy director Andrew McCabe late Friday, less than two days shy of his retirement, ending the career of an official who rose to serve as second-in-command at the bureau.

Writing for White Russian émigrés in the 1920s and 1930s, Ivan Ilyin provided a metaphysical and moral justification for political totalitarianism, which he expressed in practical outlines for a fascist state. But his ideas have now been revived and celebrated by Putin: because Ilyin found ways to present the failure of the rule of law as Russian virtue, Russian kleptocrats use his ideas to portray economic inequality as national innocence. And by transforming international politics into a discussion of “spiritual threats,” Ilyin’s works have helped Russian elites to portray the Ukraine, Europe, and the United States as existential dangers to Russia.

International Harvest, Inc of Mount Vernon, NY is recalling 14,620 lbs. of bulk and 24,270 bags of Organic Go Smile! Raw Coconut, because it has the potential to be contaminated with Salmonella, an organism which can cause serious and sometimes fatal infections in young children, frail or elderly people, and others with weakened immune systems. Healthy persons infected with Salmonella often experience fever, diarrhea (which may be bloody), nausea, vomiting and abdominal pain. In rare circumstances, infection with Salmonella can result in the organism getting into the bloodstream and producing more severe illnesses such as arterial infections (i.e., infected aneurysms), endocarditis and arthritis. 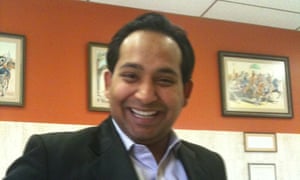 GJH Global Ministries, which made its website private after inquiries by the Guardian, does not appear to have a clear purpose

One of the top officials in Donald Trump’s housing department runs an opaque religious charity with a colleague who resigned from the administration when the Guardian found he was accused of fraud and exaggerated his biography.

Related: US housing department adviser quits amid questions of fraud and inflated biography

During the Nuremberg Trials after World War II, several Nazis, including top German generals Alfred Jodl and Wilhelm Keitel, claimed they were not guilty of the tribunal’s charges because they had been acting at the directive of their superiors.

Ever since, this justification has been popularly known as the “Nuremberg defense,” in which the accused states they were “only following orders.”

The Nuremberg judges rejected the Nuremberg defense, and both Jodl and Keitel were hanged. The United Nations International Law Commission later codified the underlying principle from Nuremberg as “the fact that a person acted pursuant to order of his Government or of a superior does not relieve him from responsibility under international law, provided a moral choice was in fact possible to him.”

This is likely the most famous declaration in the history of international law and is as settled as anything possibly can be.

However, many members of the Washington, D.C. elite are now stating that it, in fact, is a legitimate defense for American officials who violate international law to claim they were just following orders. View of some of the Nazi leaders accused of war crimes during World War II during the war crimes trial at Nuremberg International Military Tribunal court, held between Nov. 20, 1945 and Oct. 1, 1946.

Specifically, they say Gina Haspel, a top CIA officer whom President Donald Trump has designated to be the agency’s next director, bears no responsibility for the torture she supervised during George W. Bush’s administration.

Haspel oversaw a secret “black site” in Thailand, at which prisoners were waterboarded and subjected to other severe forms of abuse. Haspel later participated in the destruction of the CIA’s videotapes of some of its torture sessions. There is informed speculation that part of the CIA’s motivation for destroying these records may have been that they showed operatives employing torture to generate false “intelligence” used to justify the invasion of Iraq.

John Kiriakou, a former CIA operative who helped capture many Al Qaeda prisoners, recently said that Haspel was known to some at the agency as “Bloody Gina” and that “Gina and people like Gina did it, I think, because they enjoyed doing it. They tortured just for the sake of torture, not for the sake of gathering information.” (In 2012, in a convoluted case, Kiriakou pleaded guilty to leaking the identity of a covert CIA officer to the press and spent a year in prison.)

Some of Haspel’s champions have used the exact language of the popular version of the Nuremberg defense, while others have paraphrased it.

One who paraphrased it is Michael Hayden, former director of both the CIA and the National Security Agency. In a Wednesday op-ed, Hayden endorsed Haspel as head of the CIA, writing that “Haspel did nothing more and nothing less than what the nation and the agency asked her to do, and she did it well.”

Hayden later said on Twitter that Haspel’s actions were “consistent with U.S. law as interpreted by the department of justice.” This is true: In 2002, the Office of Legal Counsel at the Justice Department declared in a series of notorious memos that it was legal for the U.S. to engage in “enhanced interrogation techniques” that were obviously torture. Of course, the actions of the Nuremberg defendants had also been “legal” under German law.

John Brennan, who ran the CIA under President Barack Obama, made similar remarks on Tuesday when asked about Haspel. The Bush administration had decided that its torture program was legal, said Brennan, and Haspel “tried to carry out her duties at CIA to the best of her ability, even when the CIA was asked to do some very difficult things.”

Texas Republican Rep. Will Hurd used the precise language of the Nuremberg defense during a Tuesday appearance on CNN when Wolf Blitzer asked him to respond to a statement from Sen. John McCain, R-Ariz.: “The Senate must do its job in scrutinizing the record and involvement of Gina Haspel in this disgraceful program.”

Hurd, a member of the House Intelligence Committee and a former CIA operative as well, told Blitzer that “this wasn’t Gina’s idea. She was following orders. … She implemented orders and was doing her job.”

Hurd also told Blitzer, “You have to remember where we were at that moment, thinking that another attack was going to happen.”

This is another defense that is explicitly illegitimate under international law. The U.N. Convention Against Torture, which was transmitted to the Senate by Ronald Reagan in 1988, states that “no exceptional circumstances whatsoever, whether a state of war or a threat or war, internal political instability or any other public emergency, may be invoked as a justification of torture.”

Notably, Blitzer did not have any follow-up questions for Hurd about his jarring comments.

Samantha Winograd, who served on President Obama’s National Security Council and now is an analyst for CNN, likewise used Nuremberg defense language in an appearance on the network. Haspel, she said, “was implementing the lawful orders of the president. … You could argue she should have quit because the program was so abhorrent. But she was following orders.”

Last but not least there’s Rich Lowry, editor of National Review, who issued a ringing defense of Haspel in Politico, claiming she was merely acting “in response to what she was told were lawful orders.”

Remarkably, this perspective has even seeped into the viewpoint of regular journalists. At a recent press conference at which Kentucky Republican Sen. Rand Paul criticized Haspel, a reporter asked him to respond to “the counterargument” that “these policies were signed off by the Bush administration. … They were considered lawful at the time.”

It fell to Paul to make the obvious observation that appears to have eluded almost everyone else in official Washington: “This has been historically a question we’ve asked in every war: Is there a point at which soldiers say ‘no’? … Horrendous things happened in World War II, and people said, well, the German soldiers were just obeying orders. … I think there’s a point at which, even suffering repercussions, that if someone asks you to torture someone that you should say no.”

(Thank you to @jeanbilly545 and Scott Horton for telling me about Hurd and Paul’s remarks, respectively.)