Interior Secretary Ryan Zinke posted this photo of himself when he toured Bears Ears on May 11, 2017. Now, Interior e-mails reveal the land seized from Bears Ears was for the benefit of oil, gas, coal and uranium corporations, and sports hunters. Sports hunters made contact with Zinke by way of hunting with Donald Trump, Jr., in Utah.
Interior halts oil and gas sale at gateway to Yellowstone

In 1968, the Polish Communist party declared thousands of Jews enemies of the state and forced them to leave Poland. Fifty years later, historians and witnesses warn of a revival of Polish anti-Semitism.

See ya later after the next mass shooting that we will find another excuse for doing nothing to stop. Whadya expect, lose NRA $$? The House plans to vote next week on legislation to beef up security at the nation’s schools, but Democrats accused Republicans of diverting attention from guns. 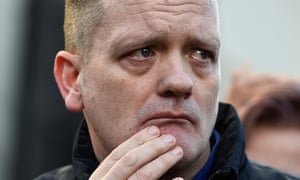 In January, Northern Irish paramilitary Gary Haggarty pleaded guilty to hundreds of violent crimes, including many killings – while working for the British state. By Ian Cobain

One day earlier this year, two prison officers led a portly, middle-aged man into court and instructed him to sit in the dock. He was wearing an ill-fitting grey suit and a grey tie; his hair was grey, and so too were his handcuffs. The only flash of colour came from his florid and slightly sagging face. In the public gallery, 10 feet behind the dock, a handful of people sat and stared at the back of the man’s red neck. Outside, 30 armed police officers were standing guard.

In the dock, Gary Haggarty sat and listened for almost an hour and a half as the judge explained the sentence he was about to receive, for offences to which he had already pleaded guilty. It took so long because there were so many crimes to be considered: 201 of them, in fact.

In the 1920s, Hu Die emerged just as a new accent on realism in film saw women permitted to play lead female roles for the first time. Hu Die’s roles included aunt, mother, teacher, prostitute, celebrity, and working woman. She was the star of China’s first talking picture, Songstress Red Peony, 1931, and the first to wow audiences with martial arts skills. Her sophisticated acting skills and fine temperament earned her widespread popularity among local audiences, such that in 1933 Hu Die was publicly anointed “Queen of the Movies”. Today, Hu Die is still credited as one of the best actresses of early cinema in China.

Many short stories I’ve recently enjoyed — Hanan al-Shaykh’s “The Angel” in Arab Women Voice New Realities; Najwa Binshatwan’s “Return Ticket,” tr. Sawad Hussain, in Banthology — have been written by women. Yet relatively few are available online. A translation of Samira Azzam’s “Man and His Alarm Clock” has been paywalled for $42.50.

Here is a handful of pearls, stitched to a branch:

This gorgeous, subversive, beautifully translated collection — subtitled “Tales from the Arab World Told by Women” — is a must-have for all ages. This story, published on Tin House, opens:

There was or there was not
In olden days that time has lost…
O you who like stories and talk
No story can be pleasing and beautiful,
Without invoking the Almighty, the Merciful.

THERE WAS A KING – there is no sovereign but God – and this king had a daughter. She was his only child and he liked to please her. So when the month for the pilgrimage to Mecca drew near, the king asked his daughter:

Tell me what do you want me to bring you from the Hajj?

This story — by Tunisian writer Rachida el-Charni — was also selected for the Granta Book of the African Short Story, ed. Helon Habila.

She saw him coming towards her, whistling and humming. He stopped in front of her to ask politely if she knew the way to Poppy Street. Not for a moment did she imagine that he would use the second she took to think to snatch her gold necklace and take to his heels.

You can read both the Arabic and the English of these graphic short stories — or comix — at grandpapier.org.

Avenue Mohammed V is silent and desolate this late at night, empty apart from a few stray cats meowing like newborn babies; it’s a creepy sound.

My life would have been a lot easier if only my grandmother had not been a liar. Or, to put it more nicely, if she hadn’t been so imaginative on that winter night when she convinced me that she would never leave me.

You can also read al-Nsour’s “That Pathetic Woman,” tr. Thoraya El-Rayyes, on ArabLit.

6. Adania Shibli’s “Out of Time,” translator not named.

This story, by Palestinian writer Adania Shibli, is built on the work of classic Palestinian short-story writer Samira Azzam, best-known for her collection, The Clock and the Man. Unfortunately a translation of Azzam’s “Man and His Alarm Clock” is no longer online.

My little watch is the first to sense the change going in to and out of Palestine.

A collection for Qarmout’s stories, titled The Sea Cloak and tr. Perween Richards, is forthcoming from Comma Press this May. The story isn’t printed online, but you can listen to it performed by Grazyna Monvid:

your back’s against the wall what will you do? doo doo
i would join our gang if i were you / oo oo
we always stick together like a glue / it’s true
there are many more of us than you

no! don’t need no bad apples
no! won’t eat those bad apples

The reason we know so much about the Russian information operations which targeted the United States from 2014 to 2017 is that some Russian journalists are very good at their jobs. Special Prosecutor…