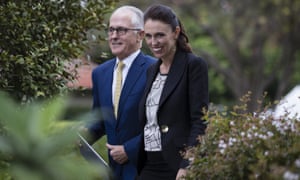 Australian values are neither clear nor consistent. If we want to make a difference in the world, we should follow New Zealand’s lead

Of all the Generation X world leaders elected in the last few years – think Justin Trudeau in Canada, Emmanuel Macron in France, and even the 31-year-old Sebastian Kurz in Austria – it is New Zealand’s Jacinda Ardern who has the firmest sense of what kind of country she wants to lead on the world stage.

Just four months since taking office after a decade of conservative rule, and while trying to carefully balance the views of three parties in government, New Zealand is already showing signs of regaining its trademark standing as a small but confident, principled and creative presence internationally. And Australia should take notice.

No shame, no morals, no ethics – destroy people because you can!

Palestinians protested a hearing intended to force them to move hundreds of bodies to make way for development.

‘Alternative Facts’ Director Kellyanne Conway would seem to be the most fitting replacement for ‘White Lies’ Director Hope Hicks.

No gain for US just for #TraitorTrumps friends. BRUSSELS (Reuters) – The European Union is considering applying 25 percent tariffs on around $3.5 billion of imports from the United States if President Donald Trump carries out his plan to apply global duties to steel and aluminium, EU sources say.

BERLIN (Reuters) – A powerful cyber attack on Germany’s government computer network was part of a worldwide campaign likely carried out by a Russian hacker group known as Snake, sources briefed on the incident said on Friday.

F##king idiot – trying to buy his way out of failure with another failure. Think of all the US auto industry being strangled by higher costs for steel and aluminium?!? And those costs being passed on to you when you try to buy a new car or truck. Job gains – forget it – just higher profits for owners with no new jobs! Another con job and no way but down for US. WASHINGTON (Reuters) – U.S. President Donald Trump struck a defiant tone on Friday, saying trade wars were good and easy to win, after his plan to put tariffs on imports of steel and aluminum triggered global criticism and a slide in stock markets.

Trump will kill the F-150 with tariff on aluminium! Conceived for an era of high gasoline prices, the F-150 has lost its fuel-efficiency selling point, while its key material has gotten costlier.

The internal Interior Department emails and memos also show the central role that concerns over gaining access to coal reserves played in the decision by the Trump administration to shrink the size of the Grand Staircase-Escalante National Monument by about 47 percent, to just over 1 million acres.

Mr. Zinke’s staff developed a series of estimates on the value of coal that could potentially be mined from a section of Grand Staircase called the Kaiparowits plateau. As a result of Mr. Trump’s action, major parts of the area are no longer a part of the national monument.

“The Kaiparowits plateau, located within the monument, contains one of the largest coal deposits in the United States,” an Interior Department memo, issued in the spring of 2017, said. About 11.36 billion tons are “technologically recoverable,” it projected.

Judge not lest you be judged?

Claiming that Aung San Suu Kyi has chosen to turn a blind eye to the genocide taking place in her country to retain her political power, Nobel Peace Prize Laureate Iran’s Shirin Ebadi today said that their fellow laureate has sold her soul to the devil.

The laureate came up with this remark at a programme titled ‘Combating Violence Against Women and Advancing Women’s Rights’ arranged by Naripokkho and Nobel Women’s Initiatives in the city where she and another Nobel Peace Prize Laureate Northern Ireland’s Mairead Maguire talked to female reporters of the country.

“When Aung San Suu Kyi was under house arrest, Mairead and I staged several campaigns in order to secure her release, we even staged demonstration outside the Myanmar Embassy in Washingtong,” she said adding, “However, unfortunately, when she was released from the house arrest she sold her soul to the devil.”

Shirin said she, as a Muslim laureate, has written several open letters to Suu Kyi saying that her silence is shameful. “I urged her to take a stance breaking her silence, but Suu Kyi didn’t reply to any of them.”

Suu Kyi appears to have forgotten how she suffered when she was under house arrest. Now the Rohingya Muslims are suffering at least ten times more than any of her sufferings but she wants to hold on her political power, she added.

Urging for a peaceful solution,Mairead Maguire said dialogue and diplomacy are very important to solve the Rohingya crisis and the role played by Bangladesh is a model for the world.

She and the two other laureates will hopefully further detect the genocide of Rohingya people to the ICC and encourage the other countries to support Bangladesh for their inspirational works in the crisis, added the laureate.

She said it is also important to focus on the need of having dialogue and listening to each other to bring peace, while everybody, including the governments, has a role to play here.

Claiming that they have the evidence that the Rohingya issue is genocide, Mairead said their next course of programme is to identify interested states through the UN who can take the Myanmar government to the ICC. “We want to find states that have passion for human rights and justice,” she added.

However, the three Nobel laureates — Tawakkol Karman of Yemen, Shirin Ebadi of Iran and Mairead Maguire of Northern Ireland — came to Bangladesh on a week-long visit to see the Rohingya situation on the ground.

The Nobel Women’s Initiative in collaboration with its partner in Bangladesh, Naripokkho, led the delegation to Bangladesh to better understand the situation of the Rohingya refugees and the two laureates except Tawakkol Karman joined the programme to share their experiences with some of the female journalists of the country.

This story was originally published by The Daily Star, Bangladesh