Unreal bought and sold legislature!?! A proposed $50 million tax break on jet fuel which would primarily benefit Delta is in jeopardy after the airline eliminated a discount for the N.R.A.

Mohammed Tamimi, 15, was shot in the head with a rubber-coated bullet by the Israeli army shortly before the video of Ahed and Nur was filmed. (Activestills/Oren Ziv)

Israeli soldiers arrested 10 young Palestinians in a pre-dawn raid on the West Bank village of Nabi Saleh early Monday, including Mohammed Tamimi, the cousin of Ahed Tamimi whom soldiers shot in the head with a rubber bullet several months ago, shattering his skull.

Mohammed is currently awaiting surgery to reconstruct the part of his skull that was removed. The Israeli army released him Monday afternoon, according to Gaby Lasky, Ahed and Nariman’s attorney.

Video of the arrest raid published by local citizen journalist Bilal Tamimi (above) also showed Israeli soldiers spraying the village with putrid ‘skunk’ water during the night-time raid. The ‘Skunk’ is meant for crowd control, but Israeli forces have been documented using it punitively against homes and schools in the past.

The now-famous video of Ahed Tamimi attempting to push two armed soldiers off of her family’s porch was filmed shortly after Mohammed was shot.

Ahed has been in Israeli military custody since her arrest on December 19, following the publication of the video. A judge ruled in January that she will remain in prison until the end of her trial. She faces 12 different charges, including incitement to violence and assaulting a soldier, which could potentially land her in prison for several years.

While the case has garnered significant international attention, the Israeli military prison system’s treatment of Ahed and Mohammed is not unique. According Palestinian human rights group Adameer, Israel was imprisoning over 300 Palestinian minors as the end of December 2017, .

+972 Magazine asked the IDF Spokesperson why Mohammed was arrested. No response was received by the time of publication. It will be added here if and when it is received.

Jordanian government spokesman Mohammad al-Momani affirmed Jordan’s ‘full solidarity’ with Jerusalem’s Christian leaders after their controversial decision to close the Church of the Holy Sepulchre on Sunday in protest to what they describe as ‘racist’ legal measures taken by the Jerusalem municipality.

‘Momani emphasized that Jordan, under the historic Hashemite custodianship on Islamic and Christian holy sites in Jerusalem, will continue to take all possible steps, to strengthen the steadfastness of Palestinians, protect holy sites and preserve the historical status of Jerusalem and its holy sites as a key to peace and a symbol of tolerance and harmony,’ read a statement on the Jordanian state website.

The Hashemite Kingdom of Jordan, under King Abdullah II, retains jurisdiction over the holy sites at Haram esh-Sharif. In a 2013 deal with the Palestinian Authority, Jordan retained ‘the right to exert all legal efforts to safeguard (the sites)’ according to the official website of King Abdullah II.

Momani warned of the seriousness of the proposed Israeli legislation, and that it may violate international law.

He called on all parties to embrace the historically religious diversity of Jerusalem and its importance to all faiths.

In an unprecedented move, the Church of the Holy Sepulchre in Jerusalem’s Old City was closed on Sunday, and will remain closed indefinitely in protest of municipal legislation that would allow Israeli authorities to expropriate Church land.

The heads of the churches who jointly manage the Church of the Holy Sepulchre announced the closure outside of the church on Sunday.

Copies of their written statement called the ‘Church Land’s Bill’ a ‘flagrant violation of the existing status quo’ that ‘breach(es) existing agreements and international obligations which guarantee the rights and privileges of the Churches, in what seems as an attempt to weaken the Christian presence in Jerusalem.’

‘The systematic campaign of abuse against Churches and Christians reaches now its peak as a discriminatory and racist bill that targets solely the properties of the Christian community in the Holy Land,’ the statement continued.

The religious leaders, representing the Greek Orthodox Patriarchate, The Custody of the Holy Land, and the Armenian Patriarchate, likened the legislative measures to the ‘dark periods’ in Europe in which Jewish land was often subjugated and expropriated.

The bill in question concerns land that was sold by the Greek Orthodox and Roman Catholic churches since 2010.

Previously, the land, which amounts roughly 50 hectares and containing more than 1,000 housing units, was leased to the Jewish National Fund by the Greek Orthodox Patriarchate for housing purposes.

The decision made by the Greek Orthodox authority to sell the land complicates the matter, and drew the ire of the Christian community in Israel and Palestine.

The new bill proposes that should any land leased by the Greek Orthodox Patriarchate to the JNF or to any other party be sold, it would be assumed by the state who will compensate whoever makes the purchase.

The bill would grant the state ultimate authority over lands sold by the church.

The bill is set to be presented before a ministerial comity on Sunday.

The number of law enforcement officers killed in the line of duty for 2017 is the second-lowest total in more than 50 years.

The 2017 numbers represent a 10 percent reduction in law enforcement deaths in the line of duty (LODs) from the previous year. In 2016, 143 officers died, with 66 killed by gunfire.

For most of us, even one cop dying is one too many.

“This is one of those good-news, bad-news situations,” said Craig Floyd, president and chief executive of the National Law Enforcement Officers Memorial Fund. “On one hand, you had 128 officers who made the ultimate sacrifice, showing the cost of public safety. But for the first time since 2013, the number of deaths has actually declined.”

Experts chalk up the reduction in deaths to more awareness about single-vehicle accidents (the leading cause of death in the line of duty) and other factors.

“It’s definitely a good sign but if it’s a trend, we’ll have to see,” Geoffrey P. Alpert, a professor at the University of South Carolina and a researcher on high-risk police activities told USA Today.

Craig Floyd said he was hopeful that this is a sign that officers have restored some trust, especially in communities where relationships have been torn.

“Body-worn cameras have helped departments become more transparent and have enabled them to stop violence before it begins after controversial incidents,” he said. “I think we are starting to see the impact of all this new training and equipment, and a shift because of the overall concern for officer safety.”

Some suggest that new policies limiting the circumstances where officers can engage in vehicle pursuits and “move over” laws** might be two factors driving the numbers in the right direction.

Texas saw the highest number of law enforcement officers killed on the job with 14 deaths.

Tied for second were Florida and New York, both with nine killed in the line of duty.

Randy Sutton, a former police lieutenant and now a pro-police activist said the reduction in numbers of officers shot and killed on the job is likely due to police officers being more fearful and less aggressive.

“There’s a saying in law enforcement: ‘You can’t get in trouble for the car stop you don’t make’,” he said. “They don’t want to be the next Ferguson, the next officer burned on the stake.”

Sutton’s theory, that the so-called Ferguson effect is keeping cops inactive because they’re afraid for their lives and reputations, is widely accepted in police circles.

In a related story, the number of people killed by officers in the United States increased from 2016 totals.

Justin Nix, a criminal justice professor at the University of South Carolina says the number of on the job deaths in a given year is usually pretty predictable.

“Every year, 100 to 150 officers die in the line of duty. It’s a relatively small number when you consider the half a million officers nationwide, so it’s going to bounce around,” Nix said. “This decrease is definitely a good thing, but there’s no way of knowing whether it might go up again next year.”

Floyd says that the awareness of officer safety and wellness could be a major factor.

“In my 33 years doing this, I’ve never seen the amount of awareness given to officer safety and wellness,” he said. “That’s definitely been paying off and will continue to help make law enforcement a significantly safer profession.”

According to the National Law Enforcement Officers Memorial Fund, a nonprofit aimed at honoring officers and improving safety, which compiled this data, the leading circumstances of firearms-related fatalities were officers responding to domestic disturbances and conducting traffic stops. One-hundred and nineteen fallen officers were male and nine were female. Their average age was 42 years, with 13 years of service. On average, each officer left behind two children.

**A move over law is a statute that requires motorists to move over and change lanes to give safe clearance to law enforcement officers, firefighters, ambulances, utility workers, and in some cases, tow-truck drivers.

This story first appeared in American Police Beat Magazine and was reprinted with their kind permission.

The man labelled a coward by US President Donald Trump for failing to confront a school shooter has denied hiding from fire. Meanwhile, gun control activists in Florida have shown no sign of backing down.

Freedom of speech is not free Jan Kuciak’s fiancée was also killed. The killings appeared related to his coverage of tax evasion and corruption in Slovakia.

Something big is happening, and bad men in power should be very, very afraid.

News is gone – racists in control – bye, bye Puerto Rico! The Army Corps of Engineers is telling its electrical restoration contractors to start scaling back their work, frustrating residents who may still be months away from getting their power back. 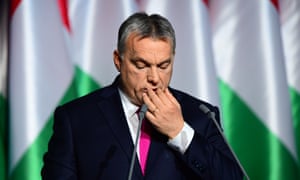 With only weeks to go before a general election, the result in Hódmezővásárhely could spell trouble for the prime minister

Hungary’s ruling party has suffered a shock defeat in a local byelection, spelling potential challenges ahead for the prime minister, Viktor Orbán, with only weeks to go before a general election.

Orbán, known for his fierce anti-migrant, populist rhetoric, will seek a third consecutive term in an election on 8 April.