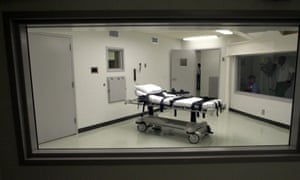 An execution in the US was aborted last week after the inmate was left with 10 puncture wounds when medical personnel were unable to find a vein after two and a half hours of trying. The failed attempts left behind a bloodied death chamber, the inmate’s lawyer said.

On Thursday, Alabama tried to execute by lethal injection convicted murderer Doyle Hamm, 61, who has spent more than half his life on death row. After about two and a half hours of trying, the state called the execution off because issues with Hamm’s veins could not be resolved before a death warrant expired at midnight.

Cameron Kasky confronting Marco Rubio about accepting donations from the NRA. The kid is fearless. He ain’t playing. Powerful. I am amazed at them every day. They have become the leaders and are fierce. They’re a force to be reckoned with. They are the Balm of Gilead to soothe our wounds and give us hope. Change is coming.

Parkland school shooting survivor David Hogg: “I want a major re-haul of everybody that’s in our current House of Representatives”

.@davidhogg111: “Columbine was about 19 years ago. Now that you’ve had an entire generation of kids growing up around mass shootings, and the fact that they’re starting to be able to vote, explains how we’re going to have this change. Kids are not going to accept this.” #ThisWeek pic.twitter.com/jAZPvMuQlf

Soweto uprising: The Soweto uprising was a series of demonstrations and protests led by black school children in South Africa that began on the morning of 16 June 1976.

Students from numerous Sowetan schools began to protest in the streets of Soweto in response to the introduction of Afrikaans as the medium of instruction in local schools. It is estimated that 20,000 students took part in the protests. They were met with fierce police brutality. The number of protesters killed by police is usually given as 176, but estimates of up to 700 have been made. In remembrance of these events, 16 June is now a public holiday in South Africa, named Youth Day.

On the morning of 16 June 1976, between 10,000 and 20,000 black students walked from their schools to Orlando Stadium for a rally to protest against having to learn through Afrikaans in school. Many students who later participated in the protest arrived at school that morning without prior knowledge of the protest, yet agreed to become involved. The protest was planned by the Soweto Students’ Representative Council’s (SSRC) Action Committee, with support from the wider Black Consciousness Movement. Teachers in Soweto also supported the march after the Action Committee emphasised good discipline and peaceful action.

Tsietsi Mashinini led students from Morris Isaacson High School to join up with others who walked from Naledi High School. The students began the march only to find out that police had barricaded the road along their intended route. The leader of the action committee asked the crowd not to provoke the police and the march continued on another route, eventually ending up near Orlando High School. The crowd of between 3,000 and 10,000 students made their way towards the area of the school. Students sang and waved placards with slogans such as, “Down with Afrikaans”, “Viva Azania” and “If we must do Afrikaans, Vorster must do Zulu”.

The police set their dog on the protesters, who responded by killing it. The police then began to shoot directly at the children.

This is the grave of Junior Wells.

Born Amos Blakemore in 1934 in or around Memphis, the boy who became Junior Wells began playing harmonica at the age of 7. When his mother divorced in 1948, they moved to Chicago. Wells, a bit of a troubled boy, began playing in bands, partially just to keep him off the street. His harmonica playing was a nearly instant hit in the Chicago blues scene. In 1952, he played on his first recordings, in Muddy Waters’ band making records for Chess. He started recording under his own name in 1953. Wells never really was much for the charts. His single “Little by Little” reached #23 on the R&B charts in 1960, but it was one of only two songs to chart. Wells certainly became much more influential than his album sales would suggest. There are a couple of reasons for this. First is that he became closely associated with Buddy Guy. In fact, Wells helped give Guy his start, but the flashy guitarist would soon outpace his mentor’s popularity. But they worked together repeatedly for the rest of Wells’ career, making many well-received albums. Closely related to this was the British rockers’ interest in blues and Wells’ relative youth in providing them that authenticity they desired. Bands like The Rolling Stones loved Wells and worked with him several times. Wells and Guy performed frequently in Britain to big audiences. He remained a major figure for the rest of his life, one of the last, along with Guy, of the classic era blues artists to be performing.

But with someone like Junior Wells, the music is far more important than any words I can write. So let’s listen to some live recordings:

Junior Wells died in 1998, at the age of 63. He had bad health the last few years of his life, including a heart attack and a bout with cancer. He is buried in Oak Woods Cemetery, Chicago, Illinois.

You can contribute to the travel required to make this series happen here. I would certainly like to highlight more blues musicians. Previous posts in this series are archived here.

The editor of the Washington Reporter offers some compelling historical analysis:

So true! For those unaware of these critical historical events, allow me to represent them in dramatic form.

I. NO TRAILS, NO CRY

Georgia sheriff: “Get out of here by sundown. We want this gold and we will have it. I hear the Ozarks are particularly unpleasant at this time of year.”

Member of Cherokee Nation: “But we have a treaty! And a favorable Supreme Court ruling!”

Leader of posse: “John Marshall has made his decision, and we will enforce it BY ANY MEANS NECESSARY!”

Sheriff: “Georgia will fully respect the treaty signed by the Cherokee Nation and allow them full sovereignty.”

General DeWitt: “Based on Executive Order 9066, I order you removed to a concentration camp.”

Fred Korematsu: “But I am an American citizen! There is no evidence that I am disloyal!”

DeWitt: “A Jap’s a Jap. It makes no difference whether the Jap is a citizen or not.”

[5 citizens, armed with rifles, led by CLIVEN BUNDY SR. approach, and point their rifles at DeWitt.]

Bundy: “Executive order REVOKED! Such exclusion goes over the very brink of constitutional power, and falls into the ugly abyss of racism.”

DeWitt: “The United States Armed Forces are powerless to combat this unstoppable force. Mr. Korematsu, you are free to go.”

Learn your history, ladies and gentlemen. 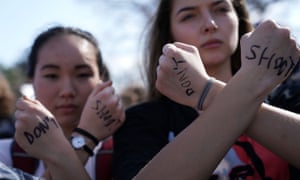 Trump has shifted our focus towards immigrants and Muslims as threats, while willfully neglecting the threat posed by racists and rightwing extremists

Last week’s horrific school shooting reminded us that Donald Trump has made America less safe. While mass shootings predate Trump, he has done something his predecessors did not: domestically, he’s shifted our focus towards immigrants and Muslims as threats, while willfully neglecting the threat posed by racists and rightwing extremists.

Internationally, he’s imposed a Muslim ban that targets citizens of countries with no history of engaging in terrorism on US soil, at the expense of far more accurate predictors of violence.