Impeach now! President Trump blocked the release of a classified Democratic memo, setting up a potential showdown with Congress over the fate of its contents. 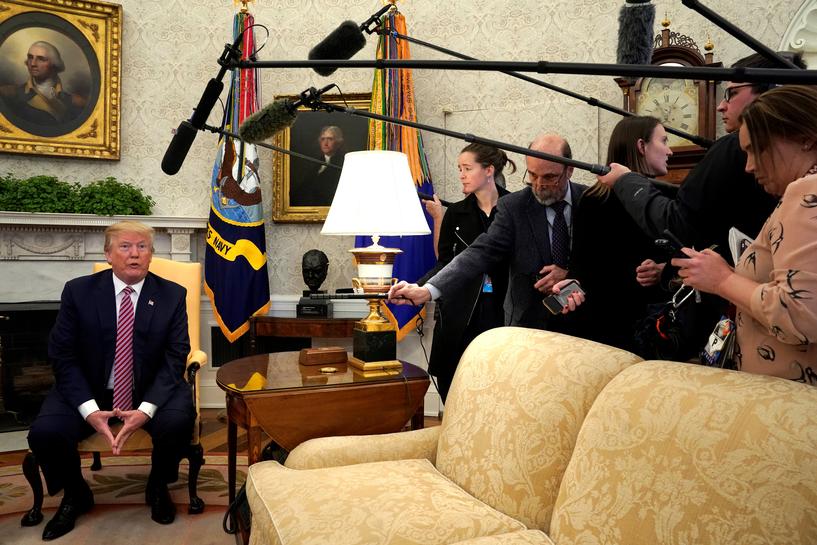 U.S. President Donald Trump on Friday blocked the release of a classified memo written by House of Representatives Democrats that rebutted a Republican document made public last week which alleged anti-Trump bias in the FBI’s Russia probe.

Just when we thought the people around Donald Trump couldn’t get any worse at dealing with internal crisis, this week they hit a new low in handling the serious issue of spousal abuse.

Reports surfaced this week that the staff secretary to the President has been accused of physically abusing his two ex-wives, with one of them releasing a picture of her black eye she says was caused by one of the President’s closest staff members.

In today’s world of the #MeToo movement against sexual harassment, allegations of spousal abuse should be taken very seriously, especially when they involve a man that is working within the highest levels of our government.

You would think, or would like to believe, that the leader of the free world and his most senior staff would move quickly against anyone accused of physically abusing his spouses, but, the exact opposite happened.

It turns out that the White House and the FBI knew about this man’s history of abuse for months, and no one did anything about it until this week when the former wives finally spoke out publicly.

This man’s past was so bad that he could not pass the FBI security clearance check that is required of people working within the West Wing of the White House. The guy even had a protective order against him and he was still, not only hired in the White House, but promoted, too.

For months, the President’s Chief of Staff, former U.S. Marine General John Kelly, knew about the abuse allegations and knew it had kept the man from passing his background check, but General Kelly did nothing about it. The man continued in his role working directly with the President even without a security clearance.

This week, when the story broke about the man’s sorted past, the White House defended his integrity and honor. Both Chief of Staff Kelly and Press Secretary Sarah Huckabee Sanders defended the man. One of the people working on the White House’s statements is the Communications Director who is now dating the accused abuser.

But, by Wednesday, the media attention was so intense that the White House reluctantly cut the guy loose.

Their official position changed and, although they continued to defend him, said the allegations against him are shocking and troubling. By Thursday, he was gone.

This story may come to end now that the serial abuser is out of the White House, but a larger problem still remains.

The President, who himself has been accused of sexual harassment by over a dozen women, promised to hire only the best and brightest in his White House, yet he has hired and defended a cast of characters with less than stellar reputations.

Since he took office, the White House has hired and lost several of the highest-ranking staffers close to the President, including Bannon, Priebus, Walsh, Flynn, Papadopoulos, Spicer, and even the Anthony “the Mooch” Scaramucci.

Trump has lost 34 percent of his senior staff in the first year, the highest level of turnover among the last six presidencies.

The knee-jerk reaction of Trump and his staff has been to deny allegations, defend those accused, and retaliate against the accusers and the media for bringing the stories to light.

Every time a story breaks, it seems the White House would rather deflect and blame others than to look honestly at the problem.

The man at the center of this week’s drama was, by all accounts, an all-star at work. He graduated from Harvard, and was a Rhodes Scholar. He had previously served as Chief of Staff to several Senators.

And, it appears, he was an abusive husband at home.

Abusers should not be given any protection or cover. As we have learned in the past few months in the still-growing exposure of sexual harassers in Hollywood, politics, and business, women have been preyed upon by men in various ways for too long.

Harassment and abuse only continues when it goes unreported, not investigated, or tolerated by others. It has no place in the office, on the movie set, or in government.

The story of this week was that the President and those around him chose to continue to protect a known abuser instead of confronting him, getting him treatment, and consoling the victims.

Instead, they did exactly what they have done from the start of Trump’s campaign and since his election; they sided with the aggressor over the victims and defended him until the very last moment.

We need leadership on the important issues of the day; immigration, security, jobs, and, yes, treatment of women.

The President should be leading by example. Even though Trump may never clear himself of allegations against him, he should, at least, deal seriously with new allegations of harassment among his closest advisors.

This week, the White House again showed it is, at best, tone-deaf when dealing with issues of harassment.

At worst, it has again enabled an aggressor to escape – for a few months – his day of reckoning.

In the end, he lost his job, but, the President and those around him kept theirs, at least for now.

(WASHINGTON)—Kica Matos, spokesperson for the Fair Immigration Reform Movement (FIRM), issued the statement below after Democrats and Republicans voted to pass a two-year spending deal without any protections for immigrant youth in place:

“Millions of lives are on the line as Republicans in Congress cower to the nativist demands of Donald Trump and the bigots who surround him in the West Wing. Every day that passes without a vote on the DREAM Act, is another day when hundreds of young immigrants lose their ability to better themselves and contribute to their communities and their families. Their political games are making young immigrants vulnerable to detention and deportation.

Donald Trump and Congressional Republicans are holding immigrant youth hostage in exchange for an extremely racist agenda that degrades people of color. Their antics are the antithesis of who we claim to be as a country. We value freedom, opportunity and family—none of which are reflected in this deal that sacrifices a generation.

Despite the consistent attacks by an Administration that is determined to make America white again, our movement is fired up and ready to keep fighting. Since Trump ended DACA in September, we have made countless calls and visits to Congress and held hundreds of actions across the country with a clear message: stop the hate; we need the DREAM Act now. Last November our message was heard loud and clear in Virginia. And we will make sure that those Members of Congress who did not stand up for immigrants feel it in the ballot boxes next November.”