Attorneys for Wynn Resorts Ltd. confirmed to the Massachusetts Gaming Commission on Wednesday that a $7.5 million settlement was paid to a manicurist at Wynn Las Vegas resort who has alleged casino mogul Steve Wynn forced her to have sex with him.

Casino regulators said that Wynn Resorts (Nasdaq: WYNN) did not disclose that settlement — first described last week in a Wall Street Journal story — to investigators during a 2013 examination to determine Wynn’s suitability to receive a gaming license.

Ghada had spent her entire life in the West Bank, yet somehow found herself deported to the Gaza Strip after being arrested by Border Police officers.

An electric cart provides transportation through the 900-meter caged terminal spanning the restricted access zone at the Erez border crossing between Israel and the Gaza Strip, July 2, 2012. (Ryan Rodrick Beiler)

Israeli authorities deported a 14-year-old epileptic Palestinian girl from the West Bank to the Gaza Strip earlier this month, without notifying her parents, and despite the fact that she has never lived there a day in her life.

Ghada, who was born in Ramallah where she has lived much of her life, was arrested by Israeli Border Police officers on January 13 for being in Jerusalem without a military permit. She was traveling back to her home in a-Ram, just northeast of Jerusalem where she lives with her mother and siblings, from her aunt’s home in the East Jerusalem neighborhood of Issawiya. Her father, though originally from the Gaza Strip, currently lives in the West Bank as well, her mother told Israeli human rights group HaMoked, which is representing the family. When Ghada was born, Israeli authorities listed her address as Gaza for an unknown reason.

Following her arrest, Ghada was interrogated by Israeli police and taken to a remand hearing at the Jerusalem Magistrate’s Court two days later, during which her parents were not present. Police requested the court extend her detention, but citing her age Judge Eitan Cohen ordered her released. Her family paid NIS 1,500 bail.

This was not Ghada’s first arrest for not having the right Israeli army-issued permit. Unlike those previous instances, however, this time the authorities deported her to a place she had never been, where she had only distant relatives whom she had never met, and without notifying her parents of where she was.

According to HaMoked: Center for the Defense of the Individual, Ghada was woken up by prison guards at 5:00 a.m. on January 15 and told that she was going to be released at the Israeli army’s Qalandiya checkpoint, which is just a few minutes’ drive from her hometown. Instead, after hours of travel, Israel Prison Service officers dropped her off — after dark — at the Erez Crossing, the only passenger terminal connecting Israel to Gaza.

According to Ghada, a representative of the Palestinian Authority on the Gaza side of the crossing noticed she was visibly distressed and took her to his home, where she stayed with his family overnight. The next day, the PA official helped Ghada get in touch with her mother to let her know what had happened. She is currently staying with her father’s relatives, whom she had never met.

Ghada suffers from epilepsy and has seizures every three to six months. She is currently undergoing medical treatment is being treated at Al Amal Medical Center in a-Ram.

According to HaMoked, there are approximately 21,000 Palestinians living in the West Bank but whose addresses are listed as Gaza. Israel, which controls the Palestinian population registry, refuses to update their address and considers them “illegal aliens” unless they have have a special military permit to live in the West Bank.

In 2012, following a High Court petition, the Israeli military committed not to deport Palestinians with a Gaza address if they had moved to live in the West Bank before Israel’s disengagement from Gaza in 2005. According to data provided by the military to HaMoked, 27 Palestinians in the West Bank were forcibly returned to the Gaza Strip last year, marking a sharp increase from previous years.

+972 sent queries to the Israel Prison Service and the Israeli army asking how this happened and what is being done to reunite Ghada with her family. We will publish their responses if and when they are received.

HaMoked sent a letter to the Israeli army’s commander responsible for the West Bank asking him to resolve the situation immediately. It plans to file an emergency petition in the High Court of Justice if Ghada’s situation isn’t resolved by Thursday.

As the first incoming explosions of the 1968 Tet Offensive attack on the 1st Infantry Division’s Lai Khe base sounded, Lou Pumphrey turned on his recorder, leaving it on the tent floor before heading to a bunker for safety. Listen to an audio of that recording.

Dolt of the century is found!

A truck driver was handed a steep fine after driving his vehicle off the highway — and onto the Nazca Lines, a 2,000-year-old archaeological wonder only visible from the air. Local media said he wanted to avoid a toll.

Christopher A. Wray, the bureau’s director, put himself at odds with President Trump, who wants to see the memo released. It is said to accuse the F.B.I. and Justice Department of surveillance abuses. 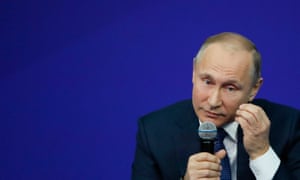 A “name-and-shame” list of Russian oligarchs who made their money corruptly from their ties with Vladimir Putin was compiled by the US government agencies but then cancelled last week by a senior administration official, according to a Russia expert who was consulted on the list.

It was replaced by an all-inclusive list of rich Russians apparently copied straight from the Forbes magazine’s ranking of wealthy Russians, together with the names of some top Kremlin officials.