Dozens of Palestinians on Sunday evening burned photos of US vice president, Mike Pence, ahead of his arrival to meet with Netanyahu and the Israeli president on Tuesday.

The protesters, who gathered in Manger Square in Bethlehem, burned the photos and stepped on them before dumping them in the trash containers, as a form of rejection of the US policies against the Palestinians, and Trump’s recognition of Jerusalem as the capital of Israel.

Scretary of the Palestinian National Liberation Movement (Fatah), Mohammad Al-Masri, told PNN reporter that the event carried the same message of a previous protest which took place following Trumo’s declaration of Jerusalem as the capital of Israel.

“The Palestinian people were counting on the Arab peoples in the countries visited by the US Vice President to express their rejection of the American position,” Al-Masri said, referring to Egypot and Jordan which Pence has visited the past days.

Fatah movement announced a general strike on Tuesday, when Pence arrives to Israel, where he will meet leaders and address the Knesset.

On Sunday, Pence met with the King of Jordan, who said that “East Jerusalem must be the capital of a future state of Palestine.”

Prior to that, Pence met with the Egyptian president, Abdul-Fattah Al-Sissi.

Thousands have met at a Las Vegas stadium ending a weekend of protest against President Donald Trump. The rally kicked off plans to register a million voters in time to oust Trump supporters from Congress in November.

Source: ‘I don’t know how they live with themselves’ – artist Nan Goldin takes on the billionaire family behind OxyContin | Art and design | The Guardian

the Sacklers, who are based in New York, have donated millions to the arts and sponsored faculties at Yale and many other universities. In each case, the family’s name is displayed prominently as the benefactor. Forbes listed the collective estimated worth of the 20 core family members at $14bn (£10bn) in 2015, partly derived from $35bn in sales revenue from OxyContin between 1995 and 2015.

But few know their wealth comes from Purdue Pharma, a private Connecticut company the family developed and wholly owns. In 1995, the company revolutionised the prescription painkiller market with the invention of OxyContin, a drug that is a legal, concentrated, chemical version of morphine or heroin. It was designed to be safe; when it first came to market, its slow-release formula was unique. After winning government approval it was hailed as a medical breakthrough, which Goldin now refers to as “magical thinking”.

It was aggressively marketed to doctors – many of whom were taken on lavish junkets, given misleading information and paid to give talks on the drug – while patients were wrongly told the pills were a reliable long-term solution to chronic pain, and in some cases offered coupons for a month’s free sample.

Goldin, 64, is incensed that no one in the Sackler family is being held to account. She has created a campaign to try to shame the family into paying for rehab and overdose antidotes instead of patios in art museums. “I’m not asking the museums to give the money back,” she says, “but I don’t want them to take any more from the Sacklers, and I want them to put out statements in solidarity with my campaign.”

Laughable – really. After a trend starts, all editors ask writers and other editors to begin looking for counter trend stories. When trend is just beginning, they want as many trendy stories as possible.

I get more and better sleep, feel less anxiety and even get out of bed quicker – and it’s all because social media sucks

I never quite fell in love with smartwatches, but I do credit my brief time with one for sparking the most positive change to my life for years: relegating my smartphone to the hallway.

With only one plug socket by my bed, and no space for an adaptor, I had to choose one device to win the hallowed bedside charging position. Thanks to my desire to eke out one final hour of standing time to goose my activity tracking, the watch won.

Who’s on first? When will #TraitorTrump disown his VP for trying to look better than him? 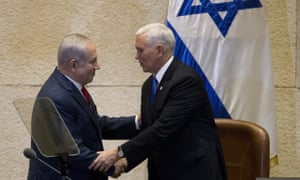 Controversial move to be made by end of 2019, vice-president tells Israeli parliament

The US will open its embassy in Jerusalem by the end of 2019, ahead of schedule, the vice-president, Mike Pence, has said. Arab-Israeli politicians were ejected from the Knesset at the start of Pence’s speech for heckling.

“In the weeks ahead, our administration will advance its plan to open the US embassy in Jerusalem – and that United States embassy will open before the end of next year,” he said in a speech to roaring applause in the Israeli Knesset.

Stupid is as stupid does – why don’t any of these fools realize that the Amazon and us by extension be killed by their folly? 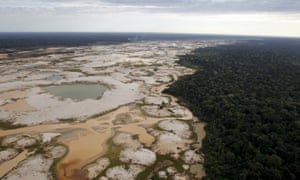 Peru has approved a law that would allow roads to be built in the most remote and pristine region of its Amazon rainforest, a haven for isolated indigenous groups and an area of primary forest rich in mahogany trees. 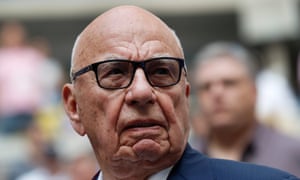 Amid policy changes at social network, media mogul criticizes it for failing to ‘adequately reward’ publishers that add value and integrity

Rupert Murdoch issued a new salvo in the row between Facebook and news publishers on Monday, calling on the social media company to pay publishers for their content.

“If Facebook wants to recognize ‘trusted’ publishers then it should pay those publishers a carriage fee similar to the model adopted by cable companies,” the News Corp chairman said in a statement. “The publishers are obviously enhancing the value and integrity of Facebook through their news and content but are not being adequately rewarded for those services.”

Like Loading...
Andrea Germanos, staff writer
Tens of thousands of people—and more than 100 tractors—swarmed the streets of Berlin this weekend to demand a food system transformation nourished by political policies that foster ecological farming.