Turkey has begun a new air and ground operation to oust Kurdish militants from the northern Syrian enclave of Afrin. Ankara accuses the Kurdish YPG militia of being a terror group.

Source: Hundreds of Israeli academics urge Netanyahu not to deport African asylum seekers: ‘We have a historic duty’

A popular program called COMPAS claims it can predict if criminal defendants will commit more crimes, and has been used by judges across the US. However, a new study has found the algorithm to be no better than a human.

Today’s Republican party is built on principle. As a matter of principle, the GOP believes it is the only party that can shut down government as a negotiating tactic. The Democrats’ job is to keep that government open and to cave in to its demands.

These truths we hold to be self-evident, after watching several rounds of this sad kabuki theater through the Clinton and Obama years.

Speaking on the floor after the vote, Senate majority leader Mitch McConnell blamed the government shutdown on a “cynical decision by the Democrats”. However, his counterpart, minority leader Chuck Schumer, blamed Donald Trump, saying the president had “walked away from two bipartisan deals” and that “a Trump shutdown will serve as a perfect encapsulation for the chaos he has unleashed”. 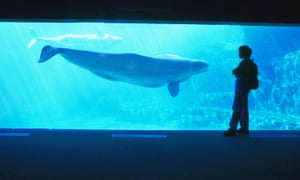 Canada aquarium has announced it will end the practice of keeping cetaceans in captivity, after pressure from the public

For years the Vancouver aquarium fended off pressure from animal right activists, local government and residents, arguing instead that whales and dolphins were central to its mission. But this week the tourist attraction gave in to public pressure, and announced that it would end the practice of keeping cetaceans in captivity.

“It had become a local hot topic, to the point where it was just hijacking everything else,” said John Nightingale, the aquarium’s president.

via aleksey godin Twitter said it has found Russian efforts to influence the U.S. presidential election in 2016 were more extensive than it originally thought, with some 677,775 Americans having followed or liked tweets put out by a notorious Russian troll farm.