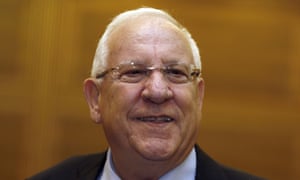 Rivlin, whose position is largely ceremonial, described proposed moves against the court by Israel’s most rightwing government ever, in particular by the far-right education minister, Naftali Bennett, and his allies, as part of “a continuous attempt to weaken the gatekeepers of the Israeli democracy”.Seated at the dais opposite Netanyahu, he said: “In this climate of delegitimisation, the atmosphere of ‘everything is political’ trickles down to the public, who receive the message that there is no more statesmanship, that there is only ruling and democracy. And in this climate, democracy means that the strong decides.”He added: “Leadership in a democratic country is the art of creating agreements, not vanquishing opponents. A democratic society is based on building processes, not revolutions.”The Israeli president continued by criticising the politicisation of Israel’s state institutions, which critics claim have gradually been placed in the hands of people regarded as loyal to Netanyahu and ministers in his coalition.Advertisement“In this revolution, the ruler is also the victim. ‘We’ll show them’ is the soundtrack of the revolution. The stateliness has gone from our country. After us the deluge.”Returning to the subject of rightwing moves to remove the ability of Israel’s top court to strike down laws passed by MPs, he added: “How can a threatened, conformist and toothless court be in the interest of the state of Israel? Of Israeli democracy?”