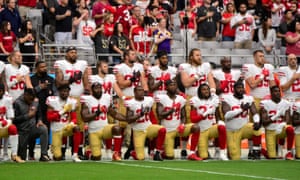 On Monday morning, Trump tweeted his displeasure. “Two dozen NFL players continue to kneel during the National Anthem, showing total disrespect to our Flag & Country,” he wrote. “No leadership in NFL!” The president’s viewpoint will play well in large parts of America. Surveys have shown a majority of white Americans disapprove of the protests; in contrast a majority of African Americans view the players’ stance favorably.