#TraitorTrump thinks he is in a movie? He has a bunker, the rest of us could die! WASHINGTON (Reuters) – After discussing Iran and North Korea with U.S. military leaders on Thursday, President Donald Trump posed for a photo with them before dinner and declared the moment “the calm before the storm.”

They had six people in the back seat, and he thinks another eight to 10 in the bed.”We tried to take the most critical and there were people bleeding out with leg wounds, leg, torso, chest — just kind of everything,” he says.”I think the hardest part was leaving dozens of people who were shot and critically injured and trying to get in and just couldn’t take all of them.”They drove them to the hospital and went back to get more. He thinks all up he took between 20 and 30 people to the trauma centre that night. 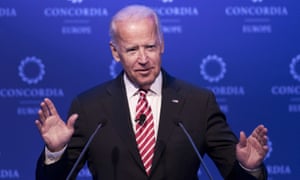 “It’s not alarmist. We’re walking down a very dark path that isolates the United States on the world stage and, as a consequence, endangers – not strengthens – endangers American interests and the American people.”In a dig at Trump’s past career as a New York property developer, Biden said: “Rather than building a shared narrative of freedom and democracy that inspires nations to unite in common goals, this administration casts global affairs in a dog-eat-dog competition, like it’s a competition: who gets that plot to build the new high rise building.”

Self portrait in front of the majestic Goðafoss waterfall in Iceland.

The Act will Bring Needed Accountability to Private Immigration Prisons

October 5, 2017 — Today, Governor Brown signed SB 29, the Dignity Not Detention Act, into law, effectively freezing the growth of private, for-profit immigration detention facilities in the state of California. The bill also prohibits cities or counties from entering into new, or modifying existing, contracts with private prison companies for the purposes of expanding immigration detention, and gives California community members the chance to weigh in on the construction of any new facilities in their neighborhoods.

Nearly 4,000 immigrants are detained in facilities across California on any given day, with over 70 percent of them housed in for-profit facilities. SB 29 was authored by Senator Ricardo Lara (D–Bell Gardens) and co-sponsored by Assembly Member Gipson, Assembly Member Gonzalez Fletcher, the Immigrant Legal Resource Center (ILRC) and Community Initiatives for Visiting Immigrants in Confinement (CIVIC).

“An economy based upon the confinement of people for profit is immoral, and now in the state of California, its expansion is illegal. Governor Brown, Senator Ricardo Lara, the California Legislature, and human rights advocates across the state have come together to pass one of the most important pieces of pro-immigrant legislation in recent history. There is much more work to be done, but this bill is a step forward in the fight to end our costly, inhumane, and unaccountable detention system,” said Christina Fialho, an attorney and the co-founder/executive director of CIVIC.

“When we detain individuals in facilities that seek profit, with no legal or moral standard of care, we are putting people in danger and encouraging inhumane behavior,” said Grisel Ruiz, staff attorney at the Immigrant Legal Resource Center. “With the Dignity Not Detention Act, we will check the growth of private immigration detention where prison corporations quite literally profit from human suffering, as we continue our work to end the unnecessary practice of jailing immigrants altogether.”

Reports of human rights abuses within these facilities are rampant, from physical and sexual abuse and overuse of solitary confinement to medical neglect and preventable deaths. Immigrants involved in the campaign to end private, for-profit detention facilities spoke out against the conditions of detention in California by saying they were unjustly “operating outside of the law,” with experiences of being “abused and tortured,” and feeling that their “religious freedoms were often violated,” and “helpless.”

“This legislation, coupled with AB 103 a new law passed in June, which checks the expansion of public facilities and directs our Attorney General to provide state oversight of all facilities, tells the federal government loud and clear that California will not be a future partner in the expansion of this broken and abuse immigration detention system,” continued Ruiz. “We thank Governor Brown, Senator Lara, and Attorney General Xavier Becerra for listening to immigrants, residents, local law enforcement, attorneys and advocates such as California Immigrant Youth Justice Alliance (CIYJA), Immigrant Youth Coalition (IYC), and Human Rights Watch, and for their leadership on this issue.”

The Immigrant Legal Resource Center and CIVIC will work in partnership with formerly and currently detained immigrants and the state’s leadership to ensure full implementation of this bill. The ILRC and CIVIC will continue to fight for additional reforms to immigration detention, including the codification of standards of care across all detention facilities, the creation of extra protections for LGBTQ-identified immigrants in detention, increased visitation access to legal counsel and family members, the increased adoption of community-based alternatives to detention, and ultimately an end to all immigration detention.

For interviews with the Immigrant Legal Resource Center, a key co-sponsor and supporter of the bill, please contact Jareyah Bradley at jareyah@balestramedia.com or908.242.4822.

For interviews with CIVIC, please contact Christina Fialho at CFialho@endisolation.org or 510–612–3570.

The Immigrant Legal Resource Center (ILRC) is a national nonprofit that works with immigrants, community organizations, legal professionals, and policymakers to build a democratic society that values diversity and the rights of all people. Through community education programs, legal training & technical assistance, and policy development & advocacy, the ILRC’s mission is to protect and defend the fundamental rights of immigrant families and communities. www.ilrc.org

Community Initiatives for Visiting Immigrants in Confinement (CIVIC) is a California-based national nonprofit devoted to abolishing U.S. immigration detention, while ending the isolation of people currently suffering in this profit-driven system. We visit and monitor 43 facilities and run the largest national hotline for detained immigrants. Through these windows into the system, we gather data and stories to combat injustice at the individual level and push wide-scale systemic change. www.endisolation.org

California Signs Dignity Not Detention Act Into Law was originally published in IMM Print on Medium, where people are continuing the conversation by highlighting and responding to this story.

“I have never considered leaving this post,” Tillerson asserted.  He contends his “commitment is as strong as it was the day I accepted his [ Trump’s ] offer as Secretary of State.”Later Wednesday, after Tillerson’s public remarks, a State Department spokesperson denied Tillerson had ever called Trump a moron.NBC News had reported that Tillerson made the comment after “a  tense two-hour long” July 20 meeting  at the Pentagon, ” according to three officials who were present or briefed on the incident.” In the same month, Tillerson threatened to resign and Pence interceded, NBC reported, citing over 10 sources for its story.

#TraitorTrump “Don’t confuse me with facts!” WASHINGTON (Reuters) – President Donald Trump is expected to announce soon that he will decertify the landmark international deal to curb Iran’s nuclear program, a senior administration official said on Thursday, in a step that potentially could cause the 2015 accord to unravel.

An inquiry into air travel by Treasury Secretary Steven Mnuchin found he broke no laws but lamented the loose justification provided to substantiate costly flights.

Representative Tim Murphy, an outspoken abortion opponent embattled by allegations that he encouraged his lover to terminate a pregnancy, announced Thursday that he would step down from his House seat this month.Speaker Paul D. Ryan said on Thursday afternoon that Mr. Murphy, a Republican who has represented his conservative Pennsylvania district since 2003, had sent him a letter of resignation, effective Oct. 21.