The Succeed Act introduced today is more of the same: another bill brought forward by Republicans that continues to criminalize immigrant communities. The bill calls for the extreme vetting of immigrants, and restricts family reunification and legal migration.We’ve seen this all before and we’re not going to stand for it. We demand that a clean Dream Act is brought to the floor for a vote. The overwhelming majority of the country is on our side. It’s time for Republicans to grow a spine, get on board and say no to bigotry.”

As ABC 7 tells it, attendees at Sunday’s game cheered in support as the players moved to kneel or link arms during the anthem.But in talking about protesting the national anthem and the potential backlash that lies in doing so, it’s impossible to not bring up former 49ers quarterback Colin Kaepernick, whose career has been in limbo since he first sat during a 49ers preseason game last year.When he was asked what that demonstration meant back in 2016, Kaepernick told NFL.com, “I am not going to stand up to show pride in a flag for a country that oppresses black people and people of color. To me, this is bigger than football and it would be selfish on my part to look the other way. There are bodies in the street and people getting paid leave and getting away with murder.”With Maxwell and the Raiders joining many other athletes across multiple professional sports leagues, it’s clear that Kaepernick’s message has not only spread, but expanded as well. 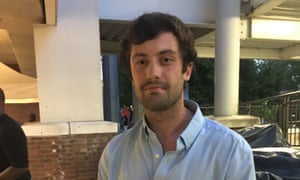 Charlottesville was definitely not the first time Trump had said something that made Cronk uncomfortable, and it was was not the first time friends had shared their fears with him about how their race might make them vulnerable. When it came to police brutality, Cronk said, he listened, but he also had his own relationship with the police as authority figures, and wanted to believe that most police officers would not simply racially profile people. “This was different,” he said. The white supremacists’ attitude towards other races was absolutely clear.Whether Trump was a white supremacist himself, he said, he did not know. But together with Trump’s “Rocket Man” jabs at North Korea, the president’s reaction to Charlottesville had convinced him that he would not be voting for Trump again, and that he needed to vet his candidates more carefully in the future.

Source: Charlottesville’s white awakening: ‘We were living in a bubble,’ say residents | World news | The Guardian