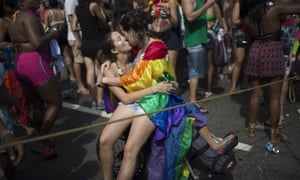 Council president Rogério Giannini, a psychologist based in São Paulo, said its 1999 decision prohibiting “sexual conversion” therapy had already faced off other legal actions and even a proposed bill in Congress.“There is no way to cure what is not a disease,” Giannini told the Guardian. “It is not a serious, academic debate, it is a debate connected to religious or conservative positions.”He noted that the ruling also said academic research into sexual conversion therapy should be allowed, which the council has never banned.“We have no power over research,” he said. “The way it was put by the judge gave the impression that we prohibited research which is not true.”As hashtags like #curagay (“gay cure”) trended in Brazil, Twitter users used memes and GIFs to ridicule the decision.“They tried to make me go to rehab, I said no, no, no,” tweeted one Brazilian using the name Ubiratan.

For writers and journalists, for activists, and for people directly affected by unjust policy and legislation, asking questions, seeking justice, and speaking out is an innate part of our work, of our livelihood, of who we are as humans. The attempt to silence people through public shaming and the tacit threat of a public and threatening pile-on are tools the federal government appears to now be using to effectively silence the most vulnerable people in our society. Many are already familiar with this culture in online spaces and in some locales, but blatantly and openly bullying constituents at the Federal level in the U.S. is new. And it does not smell like democracy.

As part of its digital campaign strategy, AfD has even brought on American consultants with the Harris Media advertising agency. The Texas consulting firm specializes in customers with “controversial” messages who range from Donald Trump and the gun lobby to France’s far-right Front National. Their task is to adapt Kunkel’s print campaign for the digital world. Two Harris employees have also embedded themselves in the digital “war room” inside the AfD’s national headquarters in Berlin.But it appears that the American pros are running into hurdles — with one of the most important advertising platforms around. Officials with AfD have complained that Google is blocking large parts of its advertising campaign. “We aren’t having difficulties with any other platform,” said campaign manager Kunkel. He said that Facebook and Twitter are treating AfD like a normal customer. “But Google is sabotaging us, creating a disadvantage for us relative to our political competition.”Dividing the Pie Between Google, Facebook and TwitterThe dispute shines a spotlight on the role the U.S. Internet giants are playing in the current German election. For the first time, the criteria used by major American internet platforms to decide on what paid political content can be disseminated to their users — and what cannot — is playing a central role in a German election.

Opening the General Assembly session, Secretary General António Guterres gravely warned about nuclear peril and climate change, and offered pointed reminders about “stronger international cooperation.”“Trust within and among countries is being driven down by those who demonize and divide,” he said in a speech that included English, French and Spanish.President Trump could not be seen in the hall.