Hurricane Irma churned across the Atlantic Ocean in September 2017, battering several Caribbean islands before moving on to the Florida Keys and the U.S. mainland. As the clouds cleared over places like the Virgin Islands, the destruction became obvious even from space. These natural-color images, captured by the Operational Land Imager (OLI) on the Landsat 8 satellite, show some of Irma’s effect on the British and U.S. Virgin Islands. The views were acquired on August 25 and September 10, 2017, before and after the storm passed. They are among the few relatively cloud-free satellite images of the area so far.The most obvious change is the widespread browning of the landscape. There are a number of possible reasons for this. Lush green tropical vegetation can be ripped away by a storm’s strong winds, leaving the satellite with a view of more bare ground. Also, salt spray whipped up by the hurricane can coat and desiccate leaves while they are still on the trees.Irma passed the northernmost Virgin Islands on the afternoon of September 6. At the time, Irma was a category 5 storm with maximum sustained winds of 185 miles (295 kilometers) per hour. According to news reports, the islands saw “significant devastation.”

Source: OPINION: Eat a (farmed) fish, save the planet | Ensia 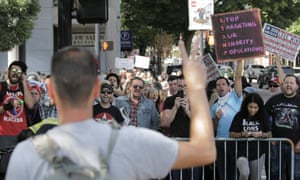 When the truck, which sported a Confederate battle flag decal as well as American flags, sped through the intersection of West 6th and Washington Streets, it was followed by a motorcyclist who had been seen leaving the Patriot Prayer rally. Both were stopped by police.The motorcyclist tore off his protective gear and made for counter-protesters before he was stopped. The driver of the truck was apprehended and cuffed. Vancouver police reported two arrests.Protesters claimed that a second truck, white and carrying four passengers – one wearing the black polo-shirt uniform of the “Proud Boys” group, another wearing a Donald Trump cap – was also driving at high speed through the streets, reversing and veering dangerously close to protesters.Greg Liascos, who attended the event, said he saw occupants of the second vehicle “throwing things from the truck” at counter-protesters. Occupants reportedly also used pepper spray. When a plastic bottle and a tennis ball were thrown back, the driver reportedly commenced revving the vehicle and “driving up and reversing down streets” at up to 40mph.

Source: Man arrested for driving truck towards anti-fascist protesters in Washington state | US news | The Guardian

The U.S. Asian population is diverse. A record 20 million Asian Americans trace their roots to more than 20 countries in East and Southeast Asia and the Indian subcontinent, each with unique histories, cultures, languages and other characteristics.The 19 largest origin groups together account for 94% of the total Asian population in the U.S. New fact sheets for each of these Asian origin groups accompany this blog post. Each describes key demographic and economic characteristics of each group.