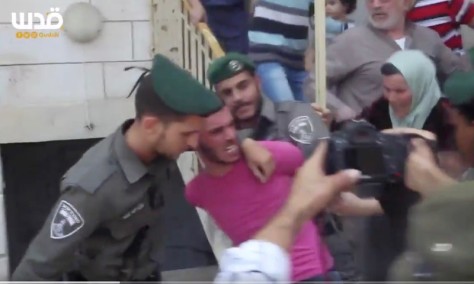 More than 100 Jewish settlers under Israeli military escort took over a Palestinian building in the occupied West Bank city of Hebron earlier this week.After barricading themselves in, the settlers dropped Israeli flags from the building.The building, owned by the Abu Rajab family and located next to the Ibrahimi mosque in Hebron’s Old City, has been targeted by settlers for years.The site has been the subject of an ongoing legal battle, with settlers claiming they purchased the building from its Palestinian owners.Violent raidSettlers raided the building on Tuesday and returned the following day, taking over two of its three floors and moving in furniture.Videos show Israeli soldiers dragging Palestinians away from the home, while a crowd of young settlers looks on, singing and dancing to celebrate the eviction of the Abu Rajab family.