“It was a 20-minute meeting, I guess, from what I’m hearing,” Trump said. “Many people, and many political pros, said everybody would do that.”

Source: Exclusive: Trump says he does not fault son for meeting Russian lawyer

A US Congressman has filed an article of impeachment against President Donald Trump over the Russia collusion scandal. In an interview on Wednesday, Trump claimed that Putin wanted Hillary Clinton to win the US election.

While the email chain, between Trump Jr. and an intermediary for a Putin-connected Russian real estate tycoon, may not be the definitive “smoking gun” proving collusion between the Trump campaign and Russia, it certainly confirms a collusion attempt was made.The email chain began in June, 2016, when an intermediary for a Russian business associate of President Trump, emailed Donald Jr. stating: “The Crown prosecutor of Russia…offered to provide the Trump campaign with some official documents and information that would incriminate Hillary and her dealings with Russia and would be very useful to your father.”   The email added, “This is obviously very high level and sensitive information but is part of Russia and its government’s support for Mr. Trump.”Donald Trump replied to the offer of Russian-provided dirt on Hillary Clinton, writing back, “If it’s what you say I love it especially later in the summer.”    As it would turn out, the most damaging Russian-hacked Clinton emails were released by WikiLeaks later in the summer.

An investigation was reopened after a bystander’s video showed a Georgia officer repeatedly hitting a homeless woman with his baton. Credit via YouTube

US border official says case of Mohsen Dehnavi, who was to work at Boston children’s hospital, is unrelated to Trump’s travel ban

Source: Iranian cancer researcher sent home after being denied entry in Boston | US news | The Guardian 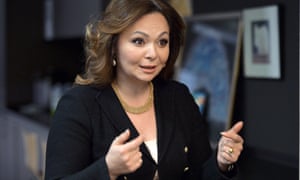 That some part of the Russian elite used the Agalarovs – well-connected in Moscow and with known links to Trump – as a potential conduit of information is a theory that makes sense to some. In a blog on Wednesday, opposition politician Navalny wrote: “It looks very plausible. I don’t doubt that the Chaika-Agalarov link could have been used by Putin (or the security services) for contacts with Trump and for passing him information through a trusted channel.”

Source: Who is Natalia Veselnitskaya: low-level lawyer or Kremlin power broker? | US news | The Guardian

some of Beijing’s biggest rivals didn’t completely buy its story of peaceful military expansion in the Gulf of Aden, instead pointing towards more nefarious motives.As political analyst Lai Yueqian said in an interview with Taiwan Today: “[The base] can be used to pin down the United States and any U.S.-led organizations, and if [the U.S.] wants to intervene against China’s interests, they will have to think carefully, because China will use their military to protect their citizens and their property.”But, regardless of their intentions, China continues to show that it’s serious about becoming more and more of a world player.

An Iceberg the Size of Delaware Just Broke Away From Antarctica