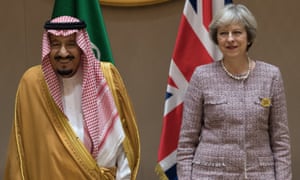 The report claims: “Saudi Arabia has, since the 1960s, sponsored a multimillion dollar effort to export Wahhabi Islam across the Islamic world, including to Muslim communities in the west.“In the UK, this funding has primarily taken the form of endowments to mosques and Islamic educational institutions, which have in turn played host to extremist preachers and the distribution of extremist literature. Influence has also been exerted through the training of British Muslim religious leaders in Saudi Arabia, as well as the use of Saudi textbooks in a number of the UK’s independent Islamic schools.”It adds: “A number of Britain’s most serious Islamist hate preachers sit within the Salafi-Wahhabi ideology and are linked to extremism sponsored from overseas, either by having studied in Saudi Arabia as part of scholarship programmes, or by having been provided with extreme literature and material within the UK itself.”Advertisement

Their structures are still standing more than 1,500 years after the last centurion snuffed it: now the Romans’ secret of durable marine concrete has finally been cracked.The Roman recipe – a mix of volcanic ash, lime (calcium oxide), seawater and lumps of volcanic rock – held together piers, breakwaters and harbours. Moreover, in contrast to modern materials, the ancient water-based structures became stronger over time.Scientists say this is the result of seawater reacting with the volcanic material in the cement and creating new minerals that reinforced the concrete.

“Be persistent. Stay focused. Panic will not help. Have patience. There is a lot to be done, but it’s ok.Seduce your hangman into taking on your beliefs. Make prison wardens your friends. Win over the hearts of those who support the villain. Convince the police that they should be on your side. When the army refuses to shoot into the crowd of protestors, the revolution has won.Take your beatings as a badge of honour. When you say that the emperor is naked, you may end up being punched in the face by the emperor’s bodyguards. You’ll be called demented, insane, a lunatic, perverted, a dangerous idiot. But you’re the happiest sort of idiot — an idiot who knows the divine joy of telling the truth.Being a punk is about constantly surprising people. It’s not about getting a mohawk and keeping it forever, if you do that you’re not a punk, you’re a conservative.

Source: nadya from pussy riot is rewriting what it means to be punk | read | i-D