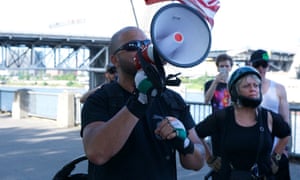 The Mercury reported that Multnomah Republicans had resolved in a meeting on Monday to “utilize volunteers from the Oregon Three Percenters, Oath Keepers, and other security groups” to protect their events. It was previously reported that the party was asking for donations to combat “threats of leftist violence”.

Source: Portland Republicans to use militia for security as far-right rallies continue | US news | The Guardian