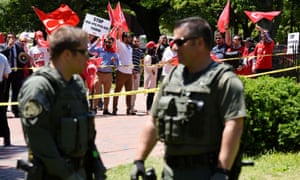 Dersimi, 61, saw one of these men grab a woman around the neck and start punching her in the face. As he moved to help her, he was attacked by three to four men, who pushed him down then kicked him repeatedly.“I couldn’t get up, I tried to cover my head with my arms, I don’t know how long they were kicking me,” Dersimi said. “Then I get up and I’m bleeding”.Footage from Tuesday’s protest shows extraordinary scenes of violence in the Washington sunshine. The attackers – who included embers of Erdoğan’s security detail – run amock, beating and kicking protesters.

Source: ‘I could have died’: how Erdoğan’s bodyguards turned protest into brawl | World news | The Guardian

CQ Roll Call reporter John Donnelly, who is chairman of the National Press Club’s Press Freedom Team and president of the Military Reporters & Editors association, “said he ran afoul of plainclothes security personnel at the FCC when he tried to ask commissioners questions when they were not in front of the podium at a scheduled press conference,” The National Press Club reported.“When Donnelly strolled in an unthreatening way toward FCC Commissioner Michael O’Rielly to pose a question, two guards pinned Donnelly against the wall with the backs of their bodies until O’Rielly had passed,” the report said. “O’Rielly witnessed this and continued walking.”The Press Club report was titled, “Reporter manhandled by FCC guards because he asked question.”

The Bronx resident was arrested for two DWIs in 2008 and 2015. (The Queens DA says Rojas pleaded down his 2008 DUI to a violation. The case is sealed.) The Times reports that the driver “appeared to have been either drunk or on drugs.”

Just who is Trump’s latest nominee then? Clovis is a conservative radio talk show host who was unsuccessful in a 2014 run for Senate in his native Iowa. He has no professional experience in food or agriculture, and is openly skeptical of climate change. He was co-chair of Trump’s campaign and has since been serving as the Department of Agriculture’s senior White House adviser.

Clarke accused Black Lives Matter of joining forces with ISIS to bring down the United States, and called them a domestic hate group and a terrorist group. He lashed out at the Women’s March, describing the march as a “freak show” and a “riot” full of “creeps.” His sexism was out in full force when he decided to call Hillary Clinton “Mrs. Bill Clinton” and declared, bizarrely, that she was not good enough to even be an “elected dog catcher.” Clarke’s Twitter presence is about as unhinged as Donald Trump’s, who he loves.But Clarke’s actions as sheriff are far more terrifying than his words. Clarke currently faces two federal lawsuits for the death of four people at Milwaukee County Jail last year. One of those deaths involved torturing an inmate via slow and fatal dehydration, who pled to jail staff for water for ten days. Clarke’s jail staff also ignored and neglected a pregnant woman who gave birth in her jail cell. The newborn baby died and county prosecutors are considering criminal charges for neglect. His “deplorable” maintenance of his own jail, which on average kills two people every year, make him a super-villain addition to a federal department that’s made it its sole prerogative to make minority lives hell for the next four years.And those are just some of his greatest feats. Jezebel has a more exhaustive run down of Clarke’s bizarre, terrifying, racist, sexist and downright nonsensical views, actions and comments.The Department of Homeland Security has not yet confirmed Clarke’s appointment, but it’s probabaly too much to hope that they have the decency to refrain from appointing a racist murderer. While it’s exhausting to keep a tab on all of the callous, appalling actions of the Administration, we have to keep watching and name/shame all of the people, particularly Republicans, who remain silent as the Trump administration fills the federal government with the scourge of American bureaucracy, ferreting out the most vitriolic of the racists to staff their departments.

The real political story about North Korea today is that the “Stalinist fortress” – the impenetrable polity devoted to hardline communism – is no longer Stalinist, nor a fortress. North Korea scholars and South Korean government experts concur in saying that Kim Jong-un holds a fraction of the power that his father and grandfather wielded.  The elites that have emerged from two decades of black market activity are aware that there are only a few obstacles to a reunification that could see them prosper, while lifting millions of North Koreans out of poverty. These factors are their “political guilt” (for they contributed to keeping the country in a state of repression over decades), and the risk of losing whatever wealth they have accumulated.  If the United States and South Korea could agree to leave some of these families in power, providing them amnesty, they could ask in return for a soft removal of the Kim family, and open the door for a gradual economic rebuilding of the country. Financial incentive, or the lack thereof, in North Korea is the key issue. The average annual income in North Korea is a little below $1,000. In the South, it is over $30,000. No amount of foreign aid can ever bridge this difference.

Source: IRIN | The real crisis in North Korea is not the one you’ve been hearing about

Curtis Allen, who had served in Iraq and returned with PTSD, sank into a hatred of Muslims. He worked at a tire shop in his hometown of Ashland for a while before drifting west to Liberal, where he fell in with a series of militia groups. He also met Wright, who had gone from working at a meatpacking plant to selling mobile homes to house the influx of new immigrants. Last summer, when Allen planted a MAKE AMERICA GREAT AGAIN sign in front of his mobile home, his neighbors—most of them Hispanic immigrants—couldn’t help but notice. Allen told them he was angry at Muslims. He allegedly voiced outrage over the Muslim terror attack at the Pulse nightclub in Orlando and was angry that “Crooked Hillary” was “openly running on disarming the American people.” He told another neighbor that the Somalis at the National Beef packing plant in Liberal were “taking all our jobs” and needed to be gotten rid of.What his neighbors didn’t know was that Allen was getting ready to put his words into action.The FBI had a decision to make. Patrick Stein, the unofficial leader of the Crusaders, was scheduled to meet with an undercover agent the day after Allen was arrested. Believing that the agent was a crime boss who had experience building massive bombs using cell phones as remote-control triggers, Stein had arranged the meeting to discuss payment in the form of cash and methamphetamines. But now that Allen was in jail, there was a chance that Stein would be too spooked to show. Should agents wait to see if he stuck to the meet, or arrest him and Wright immediately?Allen’s girlfriend told agents that Allen had been learning to manufacture explosives by studying videos on YouTube. At G&G, she had watched him stir up hydrogen peroxide and fuel tablets to make hexamethylene triperoxide diamine—a common homemade explosive used to make blasting caps to detonate larger bombs. The Crusaders already had the means to detonate a large blast, but not reliably, and apparently only if they were willing to serve as suicide bombers. During an exchange of text messages to set up the meeting, the undercover agent had asked Stein what weapons the group was hoping to acquire. “High explosives,” Stein replied, “automatic weapons RPG shit brother if I could get a hold of a warthog or Apache helicopter I would be after that too.” The Crusaders, it appeared, had more ambition than actual firepower. The FBI decided not to arrest Stein or Wright, gambling that they still believed Allen was being held only for domestic abuse.

Source: “The Only Good Muslim Is a Dead Muslim” | New Republic

Vladamir Putin has said he is willing to hand over a transcript of talks between Donald Trump and senior Russian officials.