Good analysis – Although – don’t give too much credit to Trump really giving any thought or Tweets for/to Egypt. He is the only thing on his radar. But offer his children a cushy deal on a Trump Hotel at Giza and he just might get interested. 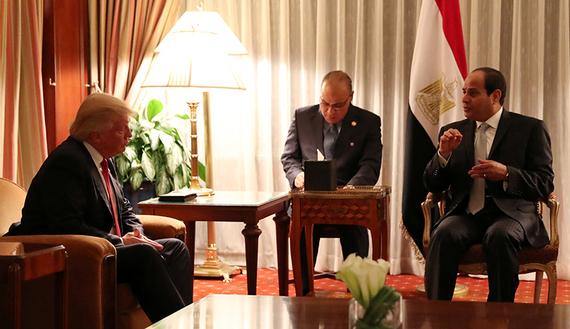 On Monday April 3, US President Donald Trump will host Egyptian President Abdel Fattah al-Sisi for talks in Washington. The last visit of an Egyptian president to the United States was by former ousted president Hosni Mubarak, in 2004.

The Egyptian leadership seems to have spent much time and effort planning this trip to post-Obama America, with three possible main goals in mind: financial support from the new Trump administration, a clearer American stance toward the Muslim Brotherhood, and kick starting a joint foreign policy that allows Egypt to be an important player in a wider regional alliance.

First, to achieve financial support from the Trump administration, which has already vowed to cut foreign aid, President Sisi first has to convince the American administration his regime is stable and that the chance of a revolution of…