(MEGA-THREAD) The plot to sell America’s foreign policy for foreign oil _and_ steal an election in the bargain began at the Mayflower Hotel. pic.twitter.com/XkoFpmMAeJ —

Source: Breaking: Reporter Makes Convincing Case Alleging Treason On The Part Of Trump And His Associates | The Intellectualist

The #Russiagate scandal involves claims Trump was given 0.5% of Rosneft and aid in getting elected in exchange for lifting US sanctions. pic.twitter.com/epnrPl9ngo

This backdrop of impunity is probably one of the reasons why, despite the officer’s maniacal outburst, none of the Palestinian men in the video dared to hit him back in the same manner. Every one of them is mindful that the officer could easily arrest them, or worse, pull out and fire his gun. The officer might claim that the men ganged up on him and that he acted in self-defense — and the police would have believed him. If the men walked free, police units might raid their homes claiming that the residents were criminals or terrorists — and the media would have believed them.Thursday’s video thus captures a more subtle but pervasive aspect of Palestinians’ experience of state violence. It’s the knowledge that, even if you have done nothing wrong, you are unlikely to receive truth, justice, or respect from the authorities that claim to serve you. It’s the same knowledge shared by black Americans who are mindful of their every move when interacting with the police, wary that the slightest suspicion — most often inferred from the mere color of their skin — can be enough to get shot.As such, the Jerusalem video offers a glimpse into the realities of a city that imposes armed officers, backed by the power of the state, upon a discriminated and oppressed population who are seen and treated as menaces and enemies. The only “irregularity” in this case is that the police commissioner could no longer provide a cover for the officer to carry out his usual work.

So when Mr. Trump said on Twitter on Saturday — a day after his crushing defeat in the House on health care — that people should watch her show that night, political observers began guessing what was in store.What she delivered was a diatribe against the House speaker, Paul D. Ryan.“Paul Ryan needs to step down as speaker of the House,” Ms. Pirro, a former prosecutor, said at the opening of her show. “The reason? He failed to deliver the votes on his health care bill.”

In his eyes, exclusion is what pushes young people toward harmful behaviour.”You have to show them tolerance and talk to them, instead of closing the door and leaving a whole group on their own to burgeon and grow even more hateful and violent and dangerous.”And his work has taken him far beyond Sweden: Last year Ahlen took part in a Unesco conference on preventing violent extremism in New Delhi.

Source: After neo-Nazi youth, Swede teaches the value of tolerance – The Local 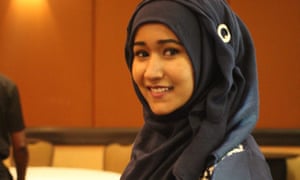 Muslims are constantly denouncing atrocities that have been committed in the name of Islam. Yet many people seem to think Muslims don’t condemn terrorism enough. So Hashmi decided to put the notion to the test. Using Google spreadsheets, she made a “712-page list of Muslims condemning things with sources”, which she tweeted. The list includes everything from acts of domestic violence to 9/11.“I wanted to show people how weak the argument [that Muslims don’t care about terrorism] is,” she explained.Her stats struck a chord. Within 24 hours, Hashmi’s tweet had been retweeted 15,000 times. A couple of her followers volunteered to help her turn her spreadsheet into an interactive website and, within a week of the tweet, muslimscondemn.com was born.

This was last November, but the website has grown considerably since then and, sadly, flickers into prominence whenever a new attack takes place. Hashmi’s project isn’t just designed to prove that Muslims are constantly condemning terrorism; she made it to demonstrate how ridiculous it is that Muslims are constantly expected to offer apologies for terrorist acts. Muslims, notes Hashmi, are “held to a different standard than other minorities: 1.6 billion people are expected to apologise and condemn [terrorism] on behalf of a couple of dozen lunatics. It makes no sense.” After all, Hashmi, says, “I don’t view the KKK or the Westboro Baptist church or the Lord’s Resistance Army as accurate representations of Christianity. I know that they’re on the fringe. So it gets very frustrating having to defend myself and having to apologise on behalf of some crazy people.”

This ‘left’ has whole-heartedly adopted the ‘War on Terror’ narrative, first promoted by Assad himself, in a way which puts neo-cons to shame. It isn’t surprising that the world often sees Syrian refugees as potential terrorists when such pundits claim the same, impeding solidarity with these victims of state terror. Some of these so-called ‘progressives’ would rather spend their time slandering the aid workers who rescue the victims rather than denouncing the US’s war crimes and imperial forays. Some of the same people promoted Trump’s candidacy for the President as the supposedly ‘anti-interventionist’ option.

‘The US is attacking ISIS strongholds,’ the media likes to tell us. Yet tens of thousands of civilians remain trapped in Raqqa under brutal ISIS occupation. Around 400,000 are under siege in Mosul, among a few thousand ISIS militants, and food and water supplies are running out. Not only are they at risk of bombs ripping their lives apart, many fear retribution from incoming militias who may see civilians as ISIS sympathizers.

Terrorism will not be defeated by foreign bombs. Every civilian killed creates only more anger, pain and despair and feeds the narrative that groups such as ISIS wish to promote. Numerous countries are now intervening in the Syrian battleground, contributing to the whole-scale slaughter. Anti-war activists should be calling on all foreign forces to leave and holding the perpetrators of war crimes to account.

Since Trump came to power there has been a marked escalation of the US intervention in Syria, supposedly to defeat ISIS.

The US already has hundreds of Special Operations forces fighting on the ground alongside the Syrian Democratic Forces and has backed them with hundreds of airstrikes. Now a marine artillery unit has been deployed to Syria to support the battle to take Raqqa and the US is planning on sending in more ground troops.

Since the beginning of this year there have been daily reports of civilians killed during US airstrikes on Syrian villages and towns. Some have resulted in large-scale massacres. On 16 March more than 40 civilians were killed, including children, and over 100 injured in the village of Al Jina, near Aleppo, when a US airstrike struck the Omar ibn al-Khattab mosque as…

It is thus clear that the Pentagon, the local citizens, activists, and journalists on the ground, as well as Bellingcat, are speaking of the very same location. But while the small building is confirmed to be a mosque, and clearly looks like one, what can we find out about the bigger building? Was it indeed a mosque?All available information from local and international media points towards it indeed being a mosque.First of all, a sign outside the western side of the building says this is the ‘Umar ibn al-Khaṭṭāb mosque, indicates it is a religious school (Arabic: مدرسة شرعية), and refers to a text on people financing the construction of the mosque.

Plant an Olive tree from Palestine

Last year, while I was chatting with my Syrian friend, the long-time star in Syrian Drama, Jehad Sa’d. He suddenly jumped off his couch and said: ” I have a splendid idea. Why don’t we plant olive trees from Palestine everywhere in the world? Israelis uproot your trees, and you can plant them all over the world, not just in Palestine. The Palestine olive tree will be everywhere, at the UN, the Vatican, in parks … ”
Last month, a friend of mine who works for Al Ta’awon, the Welfare institution that works for projects in Palestine, launched the same idea. I thought they stole our idea ). But I was so proud that someone took this to an actual level of implementation.
As Al Ta’awon launched its campaign, I call all those who dream of peace for the people of the uprooted olive…

Finding peace and understanding is hard but worth the effort – sometimes it is really hard but Nadia makes it easier.

A journey inside the General’s Son Miko Peled.
The answers have changed.

“If you knew what I know, if you saw what I saw, you would do the same. The pain of knowing what I know is a pain so sharp that sitting around and doing nothing stopped being an option for me a long time ago.”

I am not sure from where to start. I know, however, this will be long. How lucky I am to encounter yet another great experience between a book and its author. I should be damn lucky.
However, yet, there is more. This is not just another book, and the author is not just another writer. Moreover, of course, yes, it is the Israel-Palestine enigma. It is the cause that only its people can relate to with such “narcissist” dogma, which somehow identifies what it means to be Palestinian and Israeli. It is all…

The General’s Son is a book that Israelis should read as much as Palestinians. Needless to say, it is a book that is so enlightening in the inner depths of one man . It is a book about spiritual purification, enlightenment, and honesty. A path human beings are meant to take .. but mostly never do. Like Einstein, he believes, that the answers have changed. It is no longer one state, two states or three states.

Source: A journey inside the General’s Son Miko Peled | nadiaharhash