Mr. King, 67, represents the most conservative corner of Iowa, and has long held policy positions rooted in deeply conservative beliefs, especially concerning immigration, which he once deemed a “slow-motion Holocaust.”He has often said he was made aware of illegal immigration as a small child by his father, the one-time mayor of a small Iowa town who taught him to take a hard line. Mr. King dropped out of Northwest Missouri State University to run a construction contracting business, and ran for the State Senate in 1996 when he first cottoned to the idea of an English-only America, something he would push for legislatively throughout his career.“Our language is getting subdivided by some forces of the federal government,” Mr. King once said. “It is time to speak with a common voice. The argument that diversity is our strength has really never been backed up by logic.”He has argued vociferously, long before Mr. Trump ran for office pushing strict anti-immigration measures, including against protections for young adults brought over as children who have been successful in America, a group many Republicans support. In 2006, he suggested a complex plan for building an electrified wall at the border, noting that this was a practice used to control livestock. In 2012, he compared immigrants to dogs.

Over the last decade, Mexico’s Silicon Valley has attracted 15 large corporations, mainly from the United States. There are also some 600 small and medium-sized companies, many of them start-ups that export 70% of their materials and content. Firms such as Oracle, HP, Motorola and IBM have found a second home in Jalisco. The state government says that companies are attracted by local talent and world-class infrastructure in Guadalajara and its environs.The state government has worked with US companies to provide Guadalajara with the infrastructure it needs to attract companies like Tesla and Salesforce, both of which are currently thinking about locating part of their operations in the city. Similarly, universities are producing greater numbers of graduates with the skills needed to meet the demands of the marketplace. 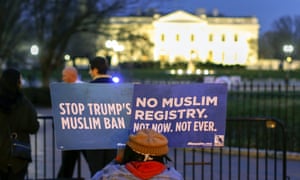 A spokeswoman, Sarah Kiriliuks, said on Monday the organization’s membership was diverse and inclusive and leaders worried some girls could get left behind when a group tried to enter the US.A temporary travel ban by Trump on citizens from six Muslim-majority countries also prompted concern among Canadian schools over the potential treatment of foreign-born students at the border.Kiriliuks said the Girl Guides didn’t want to take the risk with all the uncertainty. She was not aware of any girls being turned away by US officials.The Girl Guides of Canada said in a letter to members it would not be approving any new trips to the United States until further notice.“This just speaks to the Girl Guides of Canada and our commitment to inclusivity,” Kiriliuks said. “We just want to make sure that no girl gets left behind.”A nationally sponsored trip to a California camp that was scheduled for this summer is being relocated. The group is encouraging local leaders to consider domestic trips instead.Canadian schools are also considering cancelling trips to the US.