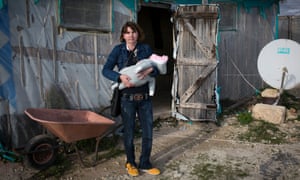 An Italian migrant rights organisation, the Proxyma Association, estimates that more than half of all Romanian women working in the greenhouses are forced into sexual relations with their employers. Almost all of them work in conditions of forced labour and severe exploitation.Police say they believe that up to 7,500 women, the majority of whom are Romanian, are living in slavery on farms across the region. Guido Volpe, a commander in the carabinieri military police in Sicily, told the Observer that Ragusa was the centre of exploitation on the island.“These women are working as slaves in the fields and we know they are blackmailed to have sex with the owners of the farms or greenhouses because of their psychological subjugation,” he says. “It is not easy to investigate or stop this from happening, as the women are mostly too afraid to speak out.”Many of the Romanian women leave children and dependent families at home and feel forced into making the desperate choices that have carved deep lines of grief into Bolos’s face.“Where I come from in Romanian Moldavia, nobody has a job,” says Bolos, as she nurses her five-month-old daughter in a dark warehouse that is now her home on another farm in Ragusa province. “The average salary there is €200 a month. Here you can make much more, even if you need to suffer.”

This means that the Donald Trump administration went on to appoint Michael Flynn as its National Security Adviser even though Mike Pence knew Flynn was taking Turkish money. It also means Mike Pence was lying this week when he claimed in this interview with Fox News host Bret Baier that he wasn’t aware of Flynn’s Turkey situation until he heard about it from the media. This is a remarkable development considering that the Trump administration framed Flynn’s firing last month as having been a result of Flynn lying to Pence about his repeated phone calls with the Russian Ambassador.

But Boente’s call to Bharara, the U.S. attorney for the Southern District of New York, appears to have left some confusion in its wake, in large part because President Trump met with Bharara soon after the election and had asked him to stay on.During Friday’s call, Bharara asked for clarity about whether the requests for resignations applied to him, given his previous conversation with Trump, and did not immediately get a definitive answer, according to a person familiar with the exchange.

Two people have died following an outbreak of listeria linked to a popular artisanal raw milk cheese made in upstate New York, the authorities said this week.The deaths occurred in Vermont and Connecticut, local officials said. Four other people in New York and Florida reported feeling sick after eating Ouleout, the artisanal cheese, which is produced by Vulto Creamery in Walton, N.Y.Illnesses started on dates between Sept. 1 of last year to Jan. 22, the Food and Drug Administration said. All six people were hospitalized and two people died.Ouleout has been celebrated across the United States as much for its unusual back story as for its flavor: It was created by Jos Vulto, a Dutch artist linked to the Museum of Modern Art, who started making cheese in his apartment and aging it under a sidewalk in Brooklyn.Continue reading the main storyVulto Creamery, which produces Ouleout, said it was recalling the product, and, as a precautionary measure, three other soft wash-rind raw milk cheeses: Miranda, Heinennellie, and Willowemoc. “We are very busy working on this recall with FDA and our customers,” the creamery said in an email without offering details on the cause of the outbreak.