As for President Trump, he and his advisors spent the last couple of days cautioning everyone not to jump to conclusions and to focus on what’s important. Trump told a meeting of state attorneys general that bomb threats against JCCs nationwide might have been done in order to “make others look bad,” a statement which baffled the Pennsylvania state attorney general. Trump advisor Anthony Scaramucci tweeted a reminder that some Democratic activists engaged in “bird dogging” during the 2016 election, a tactic that’s generally understood to mean aggressive questioning of elected officials, as proof that…maybe liberals are behind this? Typical of a coward who’s “just raising questions,” Scaramucci later tweeted that he just didn’t want anyone to overreact and of course he Loves The Jews. 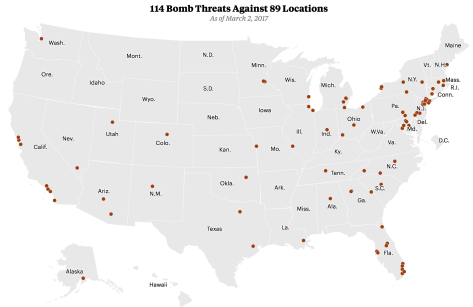 Ken Schwencke and Al Shaw from ProPublica with a set of straightforward maps that show bomb threats to Jewish community centers and organizations: Since Jan. 1, at least 89 locations of Jewish organizations in the United States — including schools, Jewish Community Centers, and offices of the Anti-Defamation League — have received a total of 114 bomb threats. The majority have come in five of what the JCC Association of North America calls “waves” — groups of robocalls coming on a single day. So far, none of the threats have been carried out.

the president believes the threatened attacks on Jewish communities around the United States are not the product of anti-Semitic terrorism, but instead are part of a campaign by his political enemies to make him look bad.On Tuesday morning, he reportedly told a gathering of state attorneys general that “sometimes it’s the reverse” when asked about such incidents as the toppling of nearly a hundred headstones in a Philadelphia Jewish cemetery.Pennsylvania Attorney General Josh Shapiro told reporters: “He just said, ‘Sometimes it’s the reverse, to make people — or to make others — look bad,’ and he used the word ‘reverse’ I would say two to three times in his comments,” Shapiro said. “He did correctly say at the top that it was reprehensible.” 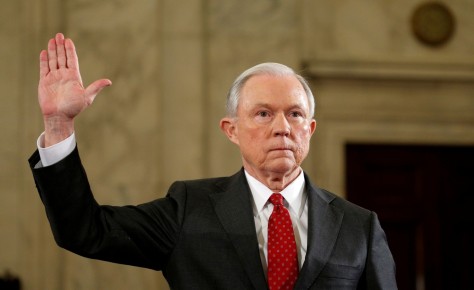 According to Justice Department officials, Sessions, a top Trump supporter, met with Russian Ambassador Sergey Kislyak twice in 2016, including one September meeting in his office. In a statement following the revelations, Sessions denied he had met with “any Russian officials to discuss issues of the campaign. I have no idea what this allegation is about. It is false,” he said.McCarthy and Chaffetz are the first prominent Republicans to call for Sessions to recuse himself. Some Democrats went further, calling on Sessions to resign, demanding an independent investigation and, in a few cases, accusing Sessions of lying under oath.“After lying under oath to Congress about his own communications with the Russians, the Attorney General must resign,” House Minority Leader Nancy Pelosi (D-Calif.) said in a statement released late Wednesday, adding that “Sessions is not fit to serve as the top law enforcement officer of our country.”

Source: Top Republicans call on Sessions to recuse himself from Russia investigation – The Washington Post