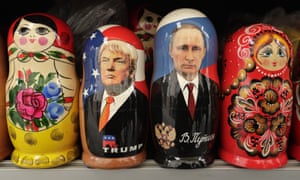 ‘Any investigation involving Trump advisers and Russian intelligence is serious stuff. If born out, it has the potential to become the greatest political scandal in American history.’ Photograph: Dmitri Lovetsky/AP

Narrative switching. That is what the Trump administration is desperately trying to do around Russia right now. The White House reportedly interfered with the FBI in the middle of an active investigation involving counter-intelligence. This was not only foolhardy but also suspicious, as it directly undermined their apparent objective: distracting us.

Source: The story of the week is Trump, Russia and the FBI. The rest is a distraction | Opinion | The Guardian