Fox, who was questioned by Customs and Border Protection officers for two hours earlier this month as she was on her way to Milwaukee to address a conference, said she collapsed and sobbed at her hotel after she was released.She said the border agents appeared to have been given “turbocharged power” by an executive order signed by President Donald Trump to “humiliate and insult” a room full of people they detained to check visas.That executive order was eventually halted by Federal Courts and it was expected a new order would be signed this week, designed to avoid the confusion caused by the original. 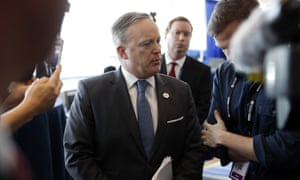 Outlets seeking to gain entry whose requests were denied included the Guardian, the New York Times, Politico, CNN, BuzzFeed, the BBC, the Daily Mail and others. Conservative publications such as Breitbart News, the One America News Network and the Washington Times were allowed into the meeting, as well as TV networks CBS, NBC, Fox and ABC. The Associated Press and Time were invited but boycotted the briefing.

And she can count American white supremacist David Duke among her fans, after he took to Twitter on Wednesday to extoll her political prowess and controversial father.   “Her father is a great man, a true patriot. He raised a strong & intelligent woman who understands how to play 21st century politics,” Duke said on Twitter, responding to a question about his views on Le Pen.

Source: Donald Trump badmouths Sweden, Germany and Paris in one go – The Local

Reporters “shouldn’t be allowed to use sources unless they use somebody’s name,” he declared, just hours after members of his own staff held a press briefing and refused to allow their names to be used.

Reporters from Time magazine and The Associated Press, who were set to be allowed in to the briefing, chose not to attend in protest of the White House’s actions.“Nothing like this has ever happened at the White House in our long history of covering multiple administrations of different parties,” Dean Baquet, the executive editor of The Times, said in a statement. “We strongly protest the exclusion of The New York Times and the other news organizations. Free media access to a transparent government is obviously of crucial national interest.”The White House Correspondents’ Association, which represents the press corps, quickly rebuked the White House’s actions.

Yay! You did it, Senator Sanders. You successfully got the most hateful, childish, racist, xenophobic, willfully ignorant, openly sexist…

Source: Congratulations, Bernie Sanders! You Got the President Trump You Wanted. – Medium