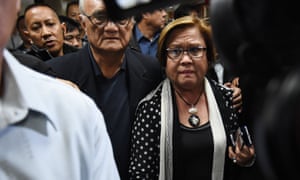 The 57-year-old lawyer, who has spent nearly a decade trying to link Duterte to death squads that have allegedly killed thousands of people, could be jailed for life if she is found guilty of the charges.“I have no plans of fleeing and I have no plans to go in hiding. I will face all these charges,” a tearful De Lima told reporters at the Senate on Thursday evening after a Manila court issued the arrest warrant.De Lima then went to her home in another part of the capital after believing she had secured an agreement with authorities to surrender on Friday morning.But, after police were seen on national television driving to her home to arrest her, De Lima quickly left and returned to the perceived safety of the Senate building.De Lima appealed late on Thursday night for police not to arrest her overnight, and committed to surrendering on Friday.“If they respect the Senate as an institution, they should not force an arrest tonight,” she told reporters at the Senate.Police followed her to the Senate. But, signalling an apparent pause to a night of intense drama, the head of security at the Senate and De Lima’s aides said police had committed to waiting until Friday morning to arrest her.When morning came reporters had gathered in their dozens and watched as De Lima was escorted from her office into a waiting police minibus.As she left she was quoted saying: “It is my honour that I will be imprisoned for the things I am fighting for.”De Lima is accused of orchestrating a drug trafficking ring when she was justice secretary in the previous administration of Benigno Aquino.